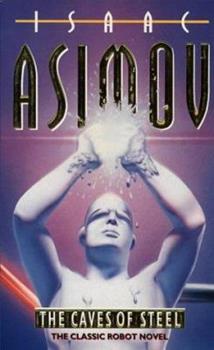 The Caves of Steel

(Book #4 in the Foundation Universe Series)

This description may be from another edition of this product. A millennium into the future two advancements have altered the course of human history: the colonization of the galaxy and the creation of the positronic brain. Isaac Asimov's Robot novels chronicle...

Published by Mark , 1 year ago
There is a good combination of logic and action. The twists of the plot as they explore the Three Laws is intriguing and though provoking.

The Laws of Robotics ... this is where it all started!

Published by Thriftbooks.com User , 14 years ago
A thousand years ago, mankind began the process of leaving mother Earth and colonizing the galaxy. Fifty planets have been now been colonized by thinly spread populations of hardy pioneering spirits - rough and ready types willing to work in hostile environments with robots as help-mates and partners - and it is obvious that mankind has evolved down two diverging sociological paths. The Earthmen - those who chose to stay at home in tightly cramped almost global city hives under the pressure of explosive population growth, an incredibly strict socialist regime and diminishing available resources - have grown timid of the slightest exposure to outside light, weather and even "un-conditioned" air. Robots, seen as competing with humans for jobs, the only meager source of status in this highly regulated environment, are despised and feared. While diplomacy and trade are maintained between Earthmen and Spacers, relations are strained and mutual distrust bordering on hatred has become the norm. When a Spacer is murdered by a visiting Earthman, the governments on both sides realize that the crime must be solved quickly and quietly to prevent a complete collapse of diplomatic relations and an explosion of tension into riots, chaos, open animosity, perhaps even a war! The Commissioner of the New York City police force orders Elijah Baley, an Earthman detective who doesn't like robots any more than the next guy, to check his emotions at the door and partner up with a Spacer robot, R Daneel Olivaw, to solve the crime. "Caves of Steel", a classic novel from the pen of Isaac Asimov - one of the acknowledged giants of science fiction writing - can be enjoyed on so many different levels. On the surface, it's an exciting, tightly plotted and nicely conceived police procedural and standard mystery set in a fascinating futuristic setting with a completely unexpected ending twist. On a deeper level, it's a foreboding, grim, bleak look at the imagined social future of mankind unless population growth is brought under control and the problems of diminishing availability of food and energy resources are addressed and solved. Finally, "Caves of Steel" is one of the first of an intricate series of novels that explores Asimov's now famous "Three Laws of Robotics", the behaviour of robots with positronic brains indelibly programmed with these three laws and the potential interactions of these robots with predictably unpredictable humans. A combination of the best of hard and soft science fiction from one of the very best science fiction writers who sadly is no longer with us! Highly recommended. Paul Weiss

Published by Thriftbooks.com User , 17 years ago
In the future of Asimov's Caves of Steel, human society has been spit in two. On the Outer Worlds, 50 planets that had been colonized by humans, populations are low and humans work hand-in-hand with robots. On Earth, the population has exploded out of control, and the humans live in giant city-hives (the Caves of Steel mentioned in the title), and they never venture into the open air. They live in a tightly controlled socialist system and most humans detest robots as job-stealers. Elijah Baley, a police detective, gets a call from the New York City police commissioner. A Spacer, as the inhabitants of the Outer Worlds are known, has been murdered by an Earthman. If the crime isn't solved, then there will be terrible diplomatic problems for Earth which may even lead to the invasion of Earth by the Spacers. To help him out, he is given a Spacer partner who also happens to be an advanced robot. Can he get along with his partner? Can he avert the destruction of human society on Earth?This is a very easy read. It's easy to see why Asimov is considered to be one of the best science fiction writers of all times. He keeps the plot twisting and surprises you in the end. Recently, we've been bombarded with the image of robots as out-of-control menaces. It's refreshing to see a robot as a true helper and friend fo mankind. I would like to see more emphasis on this type of robot in the future of science fiction. It give us more to think about when the danger in a story comes from human attitudes rather than from blood-thirsty robots. You really have to think about how you would react if you were placed in a similar situation. I'm really looking forward to reading the next book in this series.

A bit dated, but one of Asimov's best

Published by Thriftbooks.com User , 20 years ago
Despite the fact that the style of this book reads a bit like "Dragnet", it's one of Asimov's best sci-novels and the first in the Robot Trilogy.Elijah Bailey is a cop in the city of New York, part of a future Earth completely covered in a steel dome (the Caves of Steel) and connected by moving beltways in supercities underground. The vast population is completely agoraphobic; that is, no one ever goes outdoors. Food is produced by vast hydroponic farms and chemical factories that process yeast into edible form. Life is rigidly controlled, manners are prescribed even for going to the Personal (lavatories) and one's job ranking determines even small privileges like a sink in one's flat or real chicken more than once a week. The planets outside of Earth have been colonized by "Spacers." After a century or two, there is friction between the cave-dwelling Earth citizens and the relatively well-off and longer-lived Spacers. Robots are manufactured on the Spacer's planets, to supply much needed labor for their under-populated worlds, and the import of the efficient machines threatens the livelihoods and thus quality of life of Earth citizens doing mundane work who hover on the edge of basic subsistence. Against this background, Lije is called in to investigate the shocking murder of one Spacer living in Spacetown outside the city. He is given an unusual partner for this investigation; a robot. Not a metallic machine, as robots appear on Earth normally, but a counterfeit of a human so convincing that even Lije suspects that R. Daneel is not a robot, but an actual man.Lije and R. Daneel search the city for suspects and motives in the murder and develop a working relationship with each other that would be, except that robots have no emotions, friendship. The investigation takes a dangerous turn that begins to entangle Lije and a loved one, and Lije must fight to solve the mystery and stay on the case.How the mystery is solved is good reading, and the relationship between Lije and Daneel is well-drawn. And the end of the story leads well to the next novel in the series, The Naked Sun, which unlike many books in a trilogy, is as strong or stronger than the first.

Published by Thriftbooks.com User , 21 years ago
I love both robots and Foundation novells. This is the first book of the robot novells followed by the Naked Sun, The Robots of Dawn and Robots and Empire, which in turn is connected to the Foundation novells.

Published by Thriftbooks.com User , 22 years ago
Ultimate sci-fi murder mystery! Elijah Baley is one of the best written detectives in history, and certainly gives old Sherlock Holmes a run for his money. This is the second book in by far the greatest sci-fi saga ever written. A must read for sci-fi lovers, and Asimov fans! Although die-hard mystery lovers may object to the futuristic nature of the book, it doesn't hinder Asimov's story-telling or the mystery, and actually enhanses it. I, ROBOT is the first book in the Asimov saga, and CAVES OF STEEL is followed by THE NAKED SUN and then THE ROBOTS OF DAWN.
Copyright © 2020 Thriftbooks.com Terms of Use | Privacy Policy | Do Not Sell My Personal Information | Accessibility Statement
ThriftBooks® and the ThriftBooks® logo are registered trademarks of Thrift Books Global, LLC