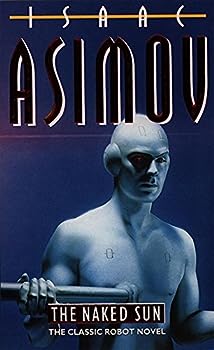 (Book #5 in the Foundation Universe Series)

This description may be from another edition of this product. A millennium into the future, two advancements have altered the course of human history: the colonization of the Galaxy and the creation of the positronic brain. On the beautiful Outer World planet of...

If you liked Caves of Steel, then pick this up.....perfect!!

Published by Thriftbooks.com User , 15 years ago
The Naked Sun is the second book in Asimov's robot series and probably my favorite but all are worth reading. This book continues the futuristic Sherlockian adventure of Elijah Bailey and his straight-man robot sidekick Daneel Olivaw. This time they journey to the planet of Solaria to solve a murder that has political implications across the galaxy. Asimov creates and socially interesting world in Solaria where people avoid human contact, live miles apart from each other and dependent upon robots to automate their society and keep their standard of living of high. Asimov deftly ties the intricacies of the Solarians into the mystery of the murder and ongoing multi book arc or robot progression. The whole thing is executed with Asimov's straightforward style and the character interaction and relationship between the two main characters is excellent as well. I highly recommend this series to any science fiction fan as this is really top shelf sci-fi writing from the best. The series should be read in order though and one should start with the I, Robot short story collection before proceeding to The Caves of Steel (which is the predecessor to this novel). Also this series is entirely appropriate for any one of at least high school age. Bottom Line: This series was revolutionary when it came out in the 50's. It's still one of the best ones out there.

Great followup to a Classic

Published by Thriftbooks.com User , 17 years ago
While "The Caves of Steel" gets my vote as "The Best Asimov Book of All-Time", this one comes in a close second place. I sure would have liked for Asimov to expand a bit more on the world from "The Caves of Steel", but he does a great job here as well, in presenting the different culture found on the Spacer world... someone HAS to make a movie out of the Robot Murder books.

Out of the caves, into the sunlight

Published by Thriftbooks.com User , 19 years ago
The Naked Sun is the sequel to The Caves of Steel, and like that is a detective story set on the featuring robot-hating Plainclothesman Baley and, as if to prove Asimov really could predict the future, or movie-making of the '80s anyway, his entirely unsuited partner R Daneel Olivaw, a robot. Unlike CoS it's set on the (spacer) planet Solaria, a planet of few people and many, servile, robots.I was a little disappointed after reading CoS, and was expecting something of the sort here, but that didn't happen. CoS was set on an Earth which I found awkwardly described - you got the impression Asimov was trying to say things about the way people thought but couldn't quite get them out. No such problem with The Naked Sun, where Baley's future-Earth foibles are out in the open (figuratively and literally), and Asimov also successfully hints for the first time that a utopia made up of a world where everything is done for you and where people can live for hundreds of years may, possibly, be flawed, a thesis that becomes stronger in "Robots of Dawn" and "Robots and Empire."Asimov wrote that CoS was an attempt to answer a critic that it was impossible to combine the genres of science fiction with detective stories. The Naked Sun is much more than an answer to that challenge, it's one of Asimov's earliest studies of humanity, and it's a well written thoroughly readable one at that.

Published by Thriftbooks.com User , 21 years ago
This is the second book in the Baley-Daneel duo. And it's better than the first one, The Caves of Steel. The Science Fiction aspect is more creative--the Solarians are unlike any race I'm seen or read. The mystery is even tougher. Looking at the two books, The Naked Sun is almost the opposite of The Caves of Steel. The latter takes place in a confined Earth, with few robots. The former is on Solaria, a world with many robots and open spaces. Baley's reaction to the expierence rings true to his character--especially when dealing with the open spaces. To sum up, this is sequel will hook you and make you crave more. How fortunate there is a book called The Robots of Dawn!

A tight probe into human nature

Published by Thriftbooks.com User , 22 years ago
Like all of Asimov's best works, this novel is a tight exploration into how humans operate. He contrasts humans both with robots and with aliens in the work, and though humans have the lower hand here, he offers hope for the future. The book happens to be a well-crafted mystery as well, just as it happens to be science fiction. Good science fiction posits humans in exotic locales doing ultimately familiar things. The fear of Elijah Bailey is a bit odd, since it is of open spaces and sunlight, but we all fear things, and Asimov gets to the heart of what fear is and how it can--and in the humans' situation in the novel--must be overcome. It is an extremely satisfying book, as most mystery novels are not.
Copyright © 2020 Thriftbooks.com Terms of Use | Privacy Policy | Do Not Sell My Personal Information | Accessibility Statement
ThriftBooks® and the ThriftBooks® logo are registered trademarks of Thrift Books Global, LLC