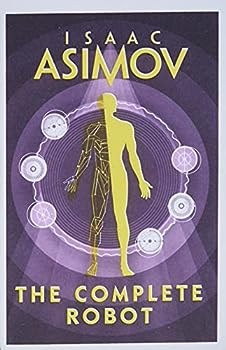 (Book #1.11 in the Foundation Universe Series)

This description may be from another edition of this product. The complete collection of Isaac Asimov's classic Robot stories. In these stories, Asimov creates the Three Laws of Robotics and ushers in the Robot Age -- when Earth is ruled by master-machines and...

Includes all the I, Robot stories

Published by Thriftbooks.com User , 17 years ago
Not so much review as info - I own this book, and was wondering if it had the I, Robot book's stories, to read before seeing the movie. The first review listed here said that it's not really complete, and you'd still need I, Robot (and two others). But a quick cross-check of I, Robot's contents with this book's reveals that all 9 of the I, Robot stories are indeed included in The Complete Robot.Robot Visions has 7 of the 9 I, Robot stories, plus 2 stories from Bicentennial Man, plus 2 others. The Complete Robot includes the 2 from Bicentennial Man, but not the other two.Robot Dreams is actually a more generic compendium and has only three robot stories, the title story being unique to Robot Dreams. The other three are included in The Complete Robot (one of those is from I, Robot as well).So The Complete Robot has all the I, Robot stories, and all the robot stories of Robot Dreams and Robot Visions excepting their respective title stories, which were newly written for those books and together with the fantastic artwork of Ralph McQuarrie probably justifies the purchase for collectors, completists and fans.

Amazing, amusing intro to future history according to Asimov

Published by Thriftbooks.com User , 18 years ago
This collection of classic science fiction short stories works on a number of levels.First and foremost, this is darn good reading, filled with Asimov's good humor and ability to tell an entertaining story.Secondly, it is mostly a prelude to his robot novels, Empire series, and Foundation series. Most of the stories are in a time period before CAVES OF STEEL. One obvious exception is an Elijah Bailey & R. Daneel Olivaw short which is a follow-up to the first two robot novels. One story, "Victory Unintentional", refers to the Terrestrian Empire, and others, especially some of the Susan Calvin stories, have to do with man's first expansion beyond our own Solar system. Thirdly, we're given a variety of levels of science-fiction writing. We're told where the original stories were first published, and we see Asimov's versatility and ability to write for various markets. Many come from Astounding/Analog, the magazine which published the hardest core science fiction. A couple come from the Ziff-Davis magazines, AMAZING STORIES & FANTASTIC which were soft-core s-f magazines. A couple come from THE MAGAZINE OF FANTASY & SCIENCE-FICTION which had a more literary slant. Several other classic s-f magazines are represented. However, some stories come from non science-fiction magazines, such as SATURDAY EVENING POST and the Boy Scout magazine BOY'S LIFE, each carefully tailored for the market. As noted by others, the Susan Calvin stories are especially good. They, along with a few other stories, appear to have been slightly revised for the sake of continuity. In fact, I question whether or not Susan Calvin was originally mentioned in "Robbie", Asimov's first robot story. Somehow, I doubt it.At any rate, this is easily one of the best collections of classic science-fiction as well as being just plain darn good reading that you'll find.

It was worth the special order price!

Published by Thriftbooks.com User , 21 years ago
I suppose I'm biased as an Asimov fan, but I really think it's a shame this book is out of print in the U.S. It was worth the $20.00+ price. If you want to read the robot stories of Asimov's which he did not include in _I, Robot_ ("Robot AL-76 Goes Astray" was great), this is a must.

Published by Thriftbooks.com User , 22 years ago
The Complete Robot is, quite simply, the full collection of short stories about Asimov's thought provoking robots. Need I say more? No serious sci-fi reader should be without this one. It is truly one of the classics of sciemce fiction. Asimov's robots succeed in making you take a good look at the true meaning of humanity. Too bad we won't be seeing more. Rest in peace, Isaac. We truly miss you...
Copyright © 2020 Thriftbooks.com Terms of Use | Privacy Policy | Do Not Sell My Personal Information | Accessibility Statement
ThriftBooks® and the ThriftBooks® logo are registered trademarks of Thrift Books Global, LLC