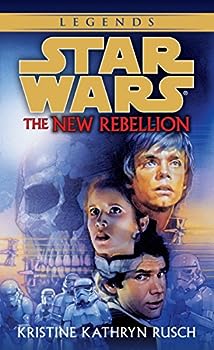 Award-winning author Kristine Kathryn Rusch brings her remarkable talents to the Star Wars(r) universe, where the New Republic faces sudden and total annihilation.... Somewhere in the galaxy, millions... This description may be from another edition of this product.

Published by Thriftbooks.com User , 19 years ago
The New Rebellion begins with a bang and doesn't stop the tension until the very last page. This wonderful page turner by Kristine Kathryn Rusch brought out every element in the Star Wars expanded universe by executing a flawless narrative that wound around an intense plotline. By reading the narrative, it was clear that the author had done her homework. Every character down to the evil Kueller and fallen Brakiss were very round and dynamic. Also, many of the expanded universe books fail to illustrate good Star Wars heroes, but in the New Rebellion even the major familiar heroes held the qualities that were given to them in the films. The pace was as quick as the film. While reading the novel, I could almost hear John Williams' soundtrack in the background during several scenes. I would have to honestly say that The New Rebellion almost matches the intensity and depth of the Thrawn Trilogy. Read the book and remember the feeling of being part of the Star Wars universe once again. If you already read the novel, read it again. It is wonderful. I certainly hope she writes another Star Wars novel.

GO OUT AND READ THIS BOOK IF YOU HAVEN'T ALREADY!

Published by Thriftbooks.com User , 23 years ago
This is a truly magnificent Star Wars novel. Kristine Kathryn Rusch knows what Star Wars is about. She refers at least obliquely to almost every single Star Wars adventure preceding hers in the timeline of the Star Wars universe. Plus, her villain, Kueller, is perhaps the most dangerous Dark Jedi so far invented in the Star Wars universe. With his droids (or, more specifically, the destruction they caused) gave him incredible amounts of dark side energy. Had he been able to destruct all the droids, he would have gained so much energy that it would have been unbelievable!

One of the best Star Wars books so far

Published by Thriftbooks.com User , 23 years ago
This book really had my attention from start to finish. The story really pulled me in and I found it difficult to put the book down. The finish is also excellent and could not have been done much better.

Published by Thriftbooks.com User , 23 years ago
The best parts of this book were the situations that Leia had to deal with--the turmoil in the New Republic--which were very intriguing, as well as the parts where R2D2 and C3PO help save the world (which come right out of the movies). It is absolutely exciting to read their dialogue because they sound exactly as they do in the movies, which is a very remembrance to them. The plot was believeable and I actually liked the book a lot. I would rather give the book a 4.5 rating but I gave it the benefit of the doubt. P.S. I am writing this late at night and my words are jumbled together horribly. The essence of what I am saying is out of the SW books I have read, this is definitely near the top of my list

Published by Thriftbooks.com User , 23 years ago
I really enjoyed this book, it lived up to the STAR WARS name. I really liked the villains, Brakiss and Kueller. The book was so interesting, I got to the point where I couldn't put it down, I just had to keep on reading. This book took me on twists and turds I didn't expect, but really enjoyed. This book is a must read!!
Trustpilot
Copyright © 2022 Thriftbooks.com Terms of Use | Privacy Policy | Do Not Sell My Personal Information | Cookie Preferences | Accessibility Statement
ThriftBooks® and the ThriftBooks® logo are registered trademarks of Thrift Books Global, LLC