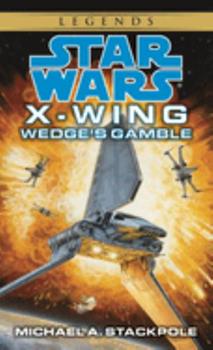 Sleek, swift, and deadly, they are the X-wing fighters. And as the battle against the Empire rages across the vastness of space, the pilots risk both their lives and their machines for the cause of the Rebel Alliance. Now they must embark on a dangerous espionage mission, braving betrayal and death on the Imperial homeworld to smash the power of a ruthless foe It is the evil heart of a battered and reeling Empire: Coruscant, the giant city-world from...

X-Wing remains one of the best parts of Star Wars

Published by Thriftbooks.com User , 17 years ago
"Wedge's Gamble" is the second novel in the nine part X-Wing series set as part of the Star Wars Expanded Universe. It is set just after the first book, "Rogue Squadron" which began approximately two years after the events of "Return of the Jedi". Michael Stackpole had a lot to live up to with "Rogue Squadron" and he does an admirable job here and continues the X-Wing story. With the military successes of Rogue Squadron in the first book, the leadership of the Alliance feels that it is now time to make a strike on the heart of the Empire itself, Coruscant. To do so, the rebels need some intelligence on Coruscant so they will be able to strike and pass through the planet's defenses and still be able to defend the planet should they prove successful. Thus begins a different sort of mission for the Rogues. The Rogues are sent undercover on Coruscant to gather intelligence and also to set up for the invasion force. Meanwhile the ruler on Corsuscant, Ysanne Isard, is setting a nasty trap for the Alliance. She is having her scientists work on a very deadly, and very contagious virus that acts similar to what we know as Ebola. The trick here is that this virus will only be effective on non-humans, which is a major backbone of the Alliance. Isard knows she can't hold Coruscant, but she wants to leave a surprise that may very well destroy the Alliance's ability to function. Nasty, indeed. As in "Rogue Squadron", we still get exciting space battles, and the comraderie of the Rogues. Corran Horn, still the lead character, is becoming torn between two women: one is a Rogue, the other is a pirate. The romance angle here is told extremely well and should not put off the core fanbase of the series (younger males). We are introduced to an additional angle of intrigue, both with Isard and the Empire as well as a potential traitor in the midst of the Rogues. Stackpole is continuing a Star Wars series that is shaping up to be one of the best things in the Star Wars Universe. A Star Wars fan should start with "Rogue Squadron", but there is no need to stop there. There is great action and an interesting storyline. -Joe Sherry

Published by Thriftbooks.com User , 17 years ago
If the first book in the X-Wing series was great, then Wedge's Gamble, the second in the acclaimed X-Wing series was phenominal. It took everything great about the first book and turned up the heat. Wedge's Gamble, has WEdge Antilles and his Rogue Squadron on an impossible mission: disable the shields of Curuscant, the seat of Imperial Power. They have to deal with rogue agents, unpleasant surprises, deadly enemies and a traitor or two in their midst. Stackpole takes his characters and crafts a remarkable story. As a stand alone book its very good as part of the X-Wing series its awesome. Once again Stackpole focuses on Corran Horn a character who is not omnipotent, who does make mistakes, sometimes crucial ones. He is a very strict former cop who has the ego of an elite pilot just to make things interesting. It's not just Horn who is well drawn but the other characters as well. As the main villain Isard is chilling, but it's the hidden agenda of Fliry Vorru that hinges the story. Full of laserfights, space battles and one really big storm, Wedge's Gamble is a superb addition to the X-Wing series and the expanded universe.

Published by Thriftbooks.com User , 21 years ago
This book really expands and goes deeper in plot than the first did. While Corran is still the main focus, more of the Squad is explored, especially Gavin Darklighter. Since the Squad is sent to Coruscant undercover to help win it from the Empire, there's a lot of cloak and dagger action along with the flying. There's a few chases present, and more than once I was holding my breath in anticipation. With the involvement of a spy in Rogue Squadron I found myself just dying to know who it was, and Iceheart has a few surprises in store for the members of Rogue Squadron and the Rebellion. There's a cliff-hanger ending and I had to start on the next book right away.Stackpole does a great job, but like the first, I found some of the battle scenes a little hard to follow. Other than that there was no problems with the book.If you liked the first X-Wing book, you'll love this one even more! A much deeper plot, and it leaves you just begging for more. A defintate read for any Star Wars fan or of a great action book.Highly reccommended.

One of the Best Star Wars Books Around!

Published by Thriftbooks.com User , 21 years ago
I really enjoyed this book. I have read other books in the series, and when you start one book, you can't put it down and you have to read the other books. This book keeps with the Star Wars tradition of fighting, but also adds suspicion, hanging you on the edge of wanting to just jump into the book and fix the problems you know the answer to. There is a slight touch of mystery that engulfs you in the book. I can't wait to read more books in the series!

Published by Thriftbooks.com User , 22 years ago
That was a well kinda TERRIFIC BOOK! They introuduce the much heard of Iella.(Why neither one ran into each other's name on the rosters is beyond me)That was a good thing to do. The depth and truth to Kirtan Loor comes out. He is a good character that was done quite well. I wonder if Stackpole planned the crazy connections between Loor, Isard, Wessari, and Horn. Probobly. The whole issue of the mysterious spy within the squad and Horn's reaction to it is so Star Wars. The characters keep within what we know about them. Somone who is afraid of snakes isn't a snake charmer in the next book if you know what I mean.I know that this is somthing that is one of Stackpole's strengths. I know that Iella wasn't an idiot from what Corran says but I didn't know she was a genius and a tough cookie as well. A welcome change from your typical damsel in distress. Even in Star Wars, I look for books that aren't filled with pitiful feminine wimps. How about a guy wimp? Seen one of those recently? I doubted it. Then how about all he undercover stuff. Think about it. Nobody dies every couple scentences. You always get a couple close misses , but death is no funny thing. You know it and I know it. Most importantly. You see that the "Bad Guys" are out to kill people and make trouble, but the "Good Guys" are trying to save lives and protect the galaxy from slime, you know the usual. Thing is, that is what seperates the Alliance and the Empire anyway. GO REBEL ALLIANCE. Or should I say GO NEW REPUBLIC! Amazing how republics build over night.
Copyright © 2020 Thriftbooks.com Terms of Use | Privacy Policy | Do Not Sell My Personal Information | Accessibility Statement
ThriftBooks® and the ThriftBooks® logo are registered trademarks of Thrift Books Global, LLC