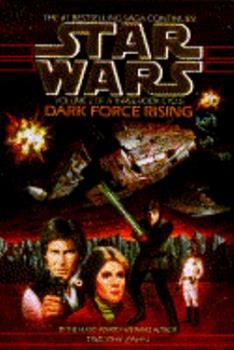 (Book #2 in the Star Wars: The Thrawn Trilogy Series)

The dying Empire's most cunning and ruthless warlord--Grand Admiral Thrawn--has taken command of the remnants of the Imperial fleet and launched a massive campaign aimed at the New Republic's destruction. With the aid of unimaginable weapons long hidden away by the Emperor on a backwater planet, Thrawn plans to turn the tide of battle, overwhelm the New Republic, and impose his iron rule throughout the galaxy. Meanwhile, Han and Lando Calrissian race...

Published by Thriftbooks.com User , 15 years ago
Do you hate George Lucas for ruining his own creation like I do? I mean, Star Wars, the defining mythology of at least two generations, the story of heroes and redemption has become the joke of our times. How could it not? Did you see that idiot, Anakin, scratching his way up the hill, beaten and burned, destined to become the shell for James Earl Jones's ominous basso voice? Did it make you groan? Did it make you want to set fire to the Skywalker Ranch? Am I alone? Now, I'm not a Star Wars Geek. I don't play the roleplaying game. Never have. I don't have the library of tie-in novels and I do poorly at the trivia compared to a lot of people. But I snuck into the theater when I was 11 years old to watch Luke Skywalker discover The Force. I know great stories and despite the slightly cheesy effects and the ham-handed acting, Star Wars was a great story. Why am I going on and on about what was? Because Timothy Zahn does Star Wars better than George Lucas does Star Wars. If Lucas had just filmed these three books - Heir to the Empire, Dark Force Rising, and The Last Command - he'd have a masterpiece to crown his early achievements. In Dark Force Rising, Leia conducts a mission to influence an alien race heretofore loyal to one of the Emperor's warlords, Luke finds himself battling an insane Jedi Master, Joruus C'Baoth, and Han Solo races the forces of the warlord, General Thrawn, to get to a lost fleet of Dreadnaught cruisers. The tension is high throughout this second book in the series and the characters conduct themselves admirably, keeping to the heroic expectations and rebellious attitudes we expect. Reading this series, and especially this book, will remind you why we loved Star Wars and why we now hate George Lucas. - CV Rick

An excellent middle book to the trilogy

Published by Thriftbooks.com User , 21 years ago
While this book isn't as exciting as Heir to the Empire, and not as immensly well written as The Last Command, it's still an excellent book that is essential to understanding the whole trilogy. Since I consider this trilogy to be the cornerstone of Star Wars fiction, I would therefor recommend it to anyone, even the casual fan who would just kind of like to know what happened next. I would defenitely also recommend reading Heir to the Empire first, since otherwise this book will make no sense what so ever. For those of you just getting into Star Wars fiction, this is a very good place to start. In fact, I would even recommend reading this series before the ones set before it, since that way it will give a better general perspective of the overall story. Several important things happen in this series that have a profound effect on everything that comes after it, Han and Leia have their first children, Jacen and Jaina, the New Republic meets it's match (once again) and for that matter so does Luke. Anyway, the story of this book in particular basically revolved around a bunch of space battles in which everyone is fighting over the Katana Fleet, or the Dark Force, which is a fleet of dreadknots (or however that's spelled) that was lost some time ago. The smuggler Talon Karrde and his second in command Mara Jade know where it is, and promise to give it to the New Republic, something that makes Mara Jade (a former imperial assasin/spy with an intense hatred of Luke, and also happens to be highly force sensitive) very displeased. Meanwhile, a pregnant Leia is on Honoghor trying to consolidate the Noghri into joining the New Republic. Though, while this book is full to the brim with vivid battles of all kinds, there is plenty of character stuff to satisfy also. Original and new characters alike are portrayed magnificently, both in their personalities and in their interactions with the other characters. Another excellent thing about this series is that it is the official introduction of Mara Jade, who is possibly the coolest and most interesting character in Star Wars. Her interactions with Luke especially were superb, very fun and interesting. When I read this book for the first time I found it hard to believe those two were going to end up together, even if it does happen ten years later, but now the second time around I can see the subtle attraction developing between them. I think this will be a relationship I will enjoy for once, much better than Luke's other relationships (Gaeriel, Callista(gagging noises)) Anyway, this is an excellent book that I would definitely recommend to any Star Wars fan, child or adult.

An awesome book for any Star Wars fan

Published by Thriftbooks.com User , 21 years ago
This book was great, definitely one of the best Star Wars books I have ever read. It was very exciting and moved quickly, and the writing made the characters seem almost real, so that I truly felt for them. All the original characters were cooler than ever and true to themselves, and all the new characters were awesome too, especially Mara Jade. I like the way her character is turning out, in that she is a really strong, tough female, who can take care of herself. She still seems to hate Luke a lot, but even that is gradually fading. I think it shows the strength of Luke's character, in that no matter how much of a jerk she is to him, he is always nothing but nice to her. I would recommemd this book to any Star Wars fan, and even to someone who's seen the movies and would kind of like to know what happened next.

Published by Thriftbooks.com User , 22 years ago
In this second novel of the Heir to the Empire trilogy Timothy Zahn splendidly continues the plots he began in the first book. Everything fits and is so exciuting that you can't put down the book. When Leia goes on a mission to the Noghri, the aliens that under the command of the empire tried to kill her, she finds herselfs in a snakes pit. Luke Skywalker is going on a search for the Jedi Master C'baoth and Han Solo tries to find a fleet of great battleships that vanished years before. To oppose the heroes Zahn once more lets Grand Admiral Thrawn give a great taste of his vicious genius. And between the fronts, Mara Jade and Talon Karrde have their own troubles. In the end 'Zahn lets the subplots flow together to a great and surprising final which will make you want to read the final book.

Not for everyone, but a real treasure

Published by Thriftbooks.com User , 22 years ago
A lot of people just can't find any excitement in character development. They want action, action, action. Dark Force Rising isn't for them.However, for someone seeking an intellectual Star Wars story (which, yes, IS possible) this is great. The Noghri are vastly interesting, and Leia's interaction with them is wonderful. (This is how the bit with the Ewoks should have gone in Return of the Jedi.)And of course, we get to see more of Mara Jade, my second favorite Star Wars character in the universe. And she's absolutely true to character (big surprise! This is one of the defining books for her character, after all.)The best part is a complete lack of Death Stars and Death-Star-like superweapons.
Trustpilot
Copyright © 2022 Thriftbooks.com Terms of Use | Privacy Policy | Do Not Sell or Share My Personal Information | Accessibility Statement
ThriftBooks® and the ThriftBooks® logo are registered trademarks of Thrift Books Global, LLC