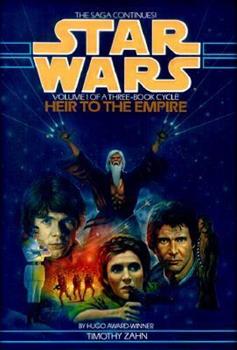 Star Wars: Heir To The Empire

(Book #1 in the Star Wars: The Thrawn Trilogy Series)

It's five years afterReturn of the Jedi:the Rebel Alliance has destroyed the Death Star, defeated Darth Vader and the Emperor, and driven out the remnants of the old Imperial Starlfleet to a distant corner of the galaxy. Princess Leia and Han Solo are married and expecting Jedi Twins. And Luke Skywalker has become the first in a long-awaited line of Jedi Knights. But thousand of light-years away...

Are The Yuuzhan Vong Getting You Down?

Published by Thriftbooks.com User , 21 years ago
Perhaps you miss Chewbacca, or the earlier years when Star Wars seemed a bit simpler, and no one felt the need to start pruning central and favorite characters, in order to make "Science Fiction" more realistic. Or maybe you need to brush up on which Grand Admiral was causing trouble for planets after studying with his glowing red eyes their art, as a prelude to their destruction. And do you recall which sessile tree-dwelling creatures made their debut or the Planet that was their home, or perhaps the smuggler who also resided there.I just wanted to go back to where the Star wars experience continued, to the summer of 1991, and the first trilogy written by Timothy Zahn. I wanted to see how well this volume held up after almost a decade, and dozens upon dozens of books, and one prequel later.The effect is rather jarring, and it is only not due to Chewbacca's presence, or the amount of action that takes place on his home planet of Kashyyyk. The Star Wars Universe described some 9 years ago for readers, that documented events only 5 years after Episode VI, really is a very different place. The cast of players is dramatically fewer, and I gained even more appreciation for just how complex the latest novels have become.I also suggest that for those who became fans of the written adventures later on in their development, that they would gain a much better grounding by reading these first books that take place after the middle cinematic trilogy. Many of the players in this first book continue on to the most recent "Balance Point" by Kathy Tyers. And others, who also remain, have evolved so far as to be unrecognizable, if you knowledge of them is limited to the more recent books.I know there are fans out there that have never forgotten a single detail of any adventure. I wish I could claim such an accurate memory. This book sat on a shelf for 9 years, and while the read was very different, it was still very enjoyable. The only element that has diminished is that when this book first arrived, it was the first fresh experience for all who had been with the series since 1977, and for those who had never seen the films.Diminished may be too strong a word, for Mr. Zahn is one of the masters of the Star Wars history, and excellent writing rarely degrades with time.So get it, or read again what you may have owned for a decade. Travel back to Mount Tantiss, and the figure that calls it home, and your subsequent reads will be improved.

NOBODY does it better than Zahn---except for Lucas himself

Published by Thriftbooks.com User , 21 years ago
Being a hard-core Star Wars fan since '77, I was thrilled but cautious when 'Heir To The Empire' first came out. I had read 'Splinter of the Mind's Eye', the FIRST Star Wars novel outside of the original trilogy books (which ALL stink, by the way) and although it was entertaining, it just seemed like a story with characters who had the same names as Leia & Luke & Darth etc. There was no real substance that tied the 'spirit' of the movies to the book. But even so, I gave Timothy Zahn a shot, and all I can say is WOW! He has captured the very 'essence' of Star Wars PERFECTLY. IF George Lucas ever decided to make Episode 7, 8 & 9 he would start with 'Heir' for sure. I don't think even HE could improve upon his own stories any better than Zahn has. Everything from Grand Admiral Thrawn (a fantastic character, and MUCH more depth than Darth or the Emperor) to the Emperor's Hand, Mara Jade, to the ingenious introduction of creatures that actually REPEL the Force, this book and it's incredible sequels are NOT to be missed. If you have EVER wondered if there were novels about the Star Wars Universe that were every bit as good as the movies, than Zahn is your author and the next series you read should start with 'Heir To The Empire'. I have read and re-read this series 3 times now, and each time I find something new to remember, and another reason to be impressed with Zahn's writing style and ability. I have also read almost all of the 'other' Star Wars novels out there (since a rash of them have been published since the completion of 'The Last Command') and there are but a small few that are even worthy of the Star Wars name, and none of THEM even rival THIS series by Zahn. I'm telling ya, THIS is IT! Ever wonder where Lucas came up with the name for the Imperial world, 'Coroscant'? He BORROWED it from Zahn (no joke). I figure if you don't read this series, you just CAN'T be a serious fan of Star Wars...but if you ARE, don't put off grabbing this entire series ASAP. It's just fantastic Space Opera. Go ahead, give it a shot. Read book 1, enjoy. Go to book 2, repeat. Etc.
Trustpilot
Copyright © 2022 Thriftbooks.com Terms of Use | Privacy Policy | Do Not Sell or Share My Personal Information | Accessibility Statement
ThriftBooks® and the ThriftBooks® logo are registered trademarks of Thrift Books Global, LLC