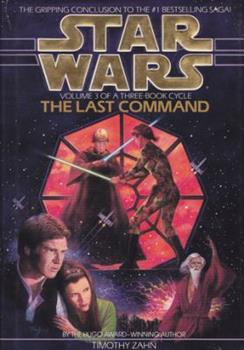 The epic story that began with Heir to the Empire reaches its dramatic conclusion in this essential Star Wars Legends novel. The embattled Republic reels from the attacks of Grand Admiral Thrawn, who... This description may be from another edition of this product.

Published by MUST HAVE , 1 month ago
I loved this book. It was the perfect way for Star Wars to end and it is sad to see it being disregarded by Disney. WOULD RECOMMEND!

Sprint to the End.

Published by Thriftbooks.com User , 15 years ago
Remember Star Wars? Not that joke of a series that came out with the most recent three movies, but instead that sometimes hokey, sometimes brilliant, always engrossing space opera from the seventies. Luke Skywalker, hero for millions of boys, Han Solo, dreamed of by girls everywhere, and Darth Vader, feared by all. That's the series that changed science fiction. Timothy Zahn loved those movies as much as I did. Timothy Zahn stayed true to that vision where George Lucas didn't. The Last Command (Star Wars: The Thrawn Trilogy, Vol. 3) is the conclusion of the best Star Wars story since we first met Luke and Han Solo. As should be, the book is action from beginning to end, but that action is varied and tense. From light saber duels to Horatio Hornblower sea battles in space to political intrigue and obsessed vindettas. The new characters feel like they were just off camera when Lucas filmed the original movies. Mara Jade has dreams of fighting Luke. She's an enforcer for a brilliant smuggler, Talon Kardde. Talon is a political animal, playing alliances and allegiances like chess moves while remaining likable and understandable. The greatest addition of all is our true villain, Grand Admiral Thrawn. The reader understands that it's a good thing that Thrawn wasn't around for the rebel victories over the Emperor because the result would have been different. He's a mastermind, both strategically and tactically, and can only be defeated by underhanded means or overwhelming force. To complicate matters, Thrawn's ally, the insane Joruus C'baoth, is a dark Jedi master trying to turn Luke to the dark side and to possess Leia's children, raising them as the seed to a new Jedi army. The action doesn't stop and the ending is fantastic. Pick it up, enjoy it, and remember those good old days. - CV Rick

A fitting finale worthy of the "Star Wars" name

Published by Thriftbooks.com User , 19 years ago
Timothy Zahn's third and final novel in the Thrawn Trilogy is so faithful to the spirit of George Lucas' original movie trilogy that many fans consider these novels to be Episodes VII, VIII and IX. And if you read this seminal three-book cycle, you'll see why, even though novels published later (such as Shadows of the Empire or Tatooine Ghost) go backwards in the "Star Wars" timeline. Here, of course, all the plot threads started in the previous two novels are wrapped up, though some of them will continue to develop in other Star Wars novels. As in the movie series that inspired it, there are space battles and lightsaber duels galore, and the mixture of adventure, romance, and drama that made Star Wars such a popular movie series is vividly recreated in Zahn's crisp and lively writing.

A stunning conclusion to a spectacular trilogy

Published by Thriftbooks.com User , 19 years ago
Timothy Zahn gave it his best when he wrote The Last Command. Out of the entire trilogy, this is by far the best. The book is the longest of the three, but it is by far the fastest read. The storylines are so intense that it would be hard to even consider putting the book down until the last page. In the book, Grand Admiral Thrawn must anticipate the movement of the old republic while confronted with conflict on how to deal with the insane jedi master C'baoth, who has become as tyrannical as the Emperor himself. As this storyline progresses, Luke and Mara also must decide their fate, which could destroy or save the republic.Fear blankets the New Republic under Thrawn's new special weapon. While under this fear, Leia's future jedi children are born, and Mara must attempt to resolve the Emperor's Last Command. All the storylines come together with such perfect emotion, action, and spectacular epic space battles. The Thrawn Trilogy is a good example of what defines the authentic good quality of the Star Wars universe - love, mythology, action, and fantasy. I honestly believe that these three novels are Episodes 7, 8, and 9. If you haven't read the Thrawn trilogy, you are missing out on one of the best science fiction gems of our time.

Published by Thriftbooks.com User , 21 years ago
What a GREAT wrap to the BEST Star Wars series in print. Let me tell you, if you thought that Star Trek was the only series to have a cloaking device, give this series a shot and you'll believe that Zahn actually made it up FIRST. NOBODY does it better! From the Empire base to a secret planet growing --- oh I just CAN'T bring myself to spoil it for you if you haven't read 'Dark Force Rising'...I sure would LIKE to tell you, though. I CAN tell you THIS: Mara Jade's unquenchable desire to kill Luke finally get's resolved...but not necessarily in the way you might think. Talon Karrde turns into a decent guy after all and (sad to say) Thrawn meets an untimely demise...or does he? Zahn's next series will have you guessing whether the good old Admiral was actually done in. Like I have said before about the other books in this series, Zahn has PERFECTLY captured the true 'essence' of the Star Wars Universe, and I have yet to find any other author who even comes close to being able to pull it off with the finesse that Zahn has. In short, this series is EVERY bit as good as the movies, and a GIANT LEAP ahead of ANY other Star Wars books in print. GET THIS SERIES!!

Published by Thriftbooks.com User , 22 years ago
Having read all 5 Zahn books, I felt obligated to write a review for my favorite of them all. I truly can't understand why anyone else writes Star Wars books. Well, I can understand it, I just wish they didn't have to! After his 5, I find the characters he created: Karrde, Jade, Thrawn, and Tierce and Flim in the new ones. He delves so deep into the roguish realm of SW that it gives readers a new perspective, while at the same time convincing us that the good guys are vulnerable. Nothing peeves me more than unstoppable heroes. My only real qualm: I actually want the bad guys to win. Come on, who really didn't want Thrawn to take over at least part of the galaxy, hmm?
Trustpilot
Copyright © 2022 Thriftbooks.com Terms of Use | Privacy Policy | Do Not Sell or Share My Personal Information | Accessibility Statement
ThriftBooks® and the ThriftBooks® logo are registered trademarks of Thrift Books Global, LLC