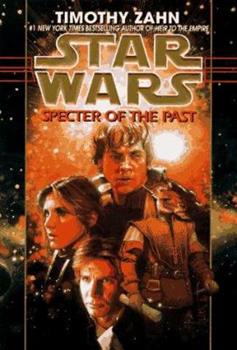 Star Wars: The Hand of Thrawn: Specter of the Past

(Book #1 in the Star Wars: The Hand of Thrawn Duology Series)

From Hugo Award-winning author Timothy Zahn, whose unprecedented bestselling trilogy continued the saga of George Lucas's blockbuster films and became a landmark in the history of science fiction publishing, comes a dramatic new chapter in the greatest science fiction epic ever told.??Now Luke Skywalker, Princess Leia, and Han Solo must battle to safeguard the fledgling New Republic from a dead Imperial warlord--and from itself. Once the unquestioned...

Published by Thriftbooks.com User , 18 years ago
After reading Timothy Zahn's first Star Wars trilogy, and finding that it was good, I, being an avid SW fan, set my sights on the dozens of other books written afterward. They. . . weren't so good. In fact, some of them were downright bad, either using a tired device over and over again (superweapon anyone?) or destroying the characters. I began to lose faith in the franchise as literature-worthy.Then Zahn wrote Specter of the Past, the first of The Hand of Thrawn Duology, and I believed again.While his Thrawn Trilogy is usually considered best, this is perhaps his most daring work. With his first trilogy, he had no canon material he had to follow, allowing him an essentially clean slate with which to work. However, after five years and over a dozen novels, there was a lot of histroy that he just couldn't ignore. However, once again, Zahn proved to be more than equal to the task, using characters and events from the earlier and inferior novels to further his story or expand his characters. And, being Zahn, it worked.The story of Specter of the Past is one of galactic conflict on a familiar Star Wars scale, but it also weaves threads intrigue and shadow plots into the play, giving the novel a fresh feel from the usual "The Imperials have a new superweapon!" arc, and it works well. One of the two main threads focuses on the supposed return of Grand Admiral Thrawn, who we saw die in The Last Command, in all his strategic genius and glory. The second thread involves the framing of the Bothans for the destruction of a pacifist planet. While Leia tries desperately to hold the New Rupiblic together in the face of a catastrophic backlash, Han and Lando struggle to acertain if Thrawn really has returned.Meanwhile, on a covert mission, Luke and Mara run into an Imperial style ship manned by clones, which vanishes into deep space. As Mara gives chase, she discovers a strange planet with a mysterious link to Grand Admiral Thrawn. Luke, recieving a disturbing premonition of her possible death, races to join her.Behind it all is a brilliant mind and a daring con, backed by a ruthless and greedy warlord bent on galactic domination. However, where others have failed, they may very well succeed.All the characters that Zahn introduced us to are back, and better than ever. Captain Pelleon holds a nominal authoritative position in the Imperial Remnant, struggling to find a way to end the decades-long conflict that has toppled an empire, while also wondering at the possible return of his mentor. Talon Kardde, smuggler and business man, journeys to the edge of the galaxy to meet a man he betrayed to uncover the truth about the Bothans. And Mara Jade is, of course, just as we remember her; smart, sassy, strong, and a perfect foil for Luke. Damn, but they make a great team.While there's plenty of swashbuckling and space battling in Specter of the Past, the stage is only being set for something much MUCH bigger. Zahn is creating something grand in this volume, something

Published by Thriftbooks.com User , 18 years ago
I admit right up front I am a firm believer that Timothy Zahn is THE Best Star Wars author out there -- bar none. Simply put, he has NO equal -- PERIOD. At least not that I have read. Anyway, after reading Zahn's original trilogy (which are the standard by which ALL Star Wars novels ought to be judged, by the way), I rekindled my interest and love in that Galaxy Far, Far Away and anxiously started to read as many other novels that came after as I could find -- only to be disappointed each and every time (with 2 or 3 possible exceptions...). Suddenly I see 'Specter of the Past' with Zahn's name on it, and my interest goes back UP again. The challenge facing him this time around wasn't so much to write a story of his choosing, but now he must incorporate into his novels events that have happened following his Trilogy by authors who have all but ruined the Star Wars name. In this effort, Zahn proves he us up to the task yet again. Many feel deprived that he chose not to explore several avenues established by other authors (such as what is going on at the Jedi Academy) but I for one am glad that he ignored these and instead developed an original story that built upon his original 3 novels and continued to expand his characterization of some of the greatest Star Wars creations to date, namely Mara Jade, Talon Karrde and Captain Pellaeon. I was one of the many who was genuinely upset when Thrawn bit the dust in Zahn's 'The Last Command'. He was in every way a better bad guy than the Emperor or Vader combined. Sure, they were more evil, but Thrawn was a far superior military strategist. Where Vader & the Emperor ruled through fear, Thrawn ruled through brilliance and gained the respect and allegiance of his army by treating them fair and providing them with results, sometimes against impossible odds. So, when Zahn hints of Thrawns return in 'Specter' I was absolutely thrilled. But is it in fact the REAL Thrawn, or a clever impersonator? In many of the previous and following SW novels, the conflicts have been larger than life and having the tiny remnants of the Empire developing Super Weapon after Super Weapon is lame and totally boring. With Zahn's careful writing, Star Wars begins to delve into what I feel to be a much more realistic setting for this series: internal conflict within the New Republic, and continuing threats from those within the Empire who wish to derail the upcoming possible treaty with the New Republic. I think that because the plot is more character driven it becomes instantly more interesting and overall more entertaining. While not as overall satisfying as his original Thrawn Trilogy, I give VERY high marks to Zahn for being able to thread together this story, and meshing it with the plot-lines established by other authors in this series. If you count yourself a fan of the Star Wars Universe, it ought to be required reading to pick up anything written by Timothy Zahn, but you should decide for yourself. In my p

Zahn's Triumphant Return to a Galaxy Far, Far Away!

Published by Thriftbooks.com User , 19 years ago
Specter of the Past is the first in the Hand of Thrawn duology, Timothy Zahn's spectacular return to the Star Wars Universe after his incredible Thrawn Trilogy began the renewed expanded universe. In Specter of the Past, the events of the Corellian Trilogy have forced Princess Leia to take a leave of absence from her post of Chief of State, while Han and Luke along with Chewie are off on a mission of their own. Mara Jade, Lando Calrissian, Talon Karrde and ADmiral Pellaeon feature prominatently as do X-Wing pilots Wedge Antilles and Corran Horn. After countless defeats, the Imperial Navy is ready to call its quits with the New Republic. They send out emissaries to negotatiate a peace with the Republic, but one Imperial Moff with his military attache and a mysterious red-eyed being are determined to gain back the empire. Filled with suspenseful dogfights as well as superb character development, Specter of the Past ensures Zahn's place as teh patriarch of the Star Wars universe.

One of the best Star Wars books that I've ever read, Honest!

Published by Thriftbooks.com User , 22 years ago
Wow, I mean wow! I loved it so much! It was a great plot and filled with tons of action. I've been hardly sleeping cuz'I had to keep reading it and now I can't wait til I can get Vision of the Future. I wish Thrawn really could be back and the Empire could win for once, but I'll take what I can get.

The best Star Wars story since The Last Command!

Published by Thriftbooks.com User , 24 years ago
This book was _the_ best Star Wars book I've ever read, except for the Heir to the Empire trilogy, of course. Zahn is the only author who has managed to capture the spirit of Star Wars. All the others were just missing something, except for one or two. My copies of his first Star Wars trilogy are the most worn books on my shelf. I love those, and I love his new ones too. He is the best. And he also has a good grasp of the Force as a plot element, better than most. And Thrawn being back is just great! He was the only real opposition the New Republic ever had. And I also think that it was great that Zahn put Rogue Squadron back in action. Wedge just wasn't the general type. Zahn just knows how to write the characters of the Star Wars universe. Talon Karrde, Fey'lya, Mara, Luke, Wedge, they all just seem more true to the movies and their spirit with him. I totally reccommend this book for everyone. It is the best! The absolute best! Before, when anyone asked me who my favorite author was, I'd name two or three people. Now I've realized that Timothy Zahn is the absolute best author I've ever read. He is the king of Star Wars! Vision of the Future, here I come!
Trustpilot
Copyright © 2022 Thriftbooks.com Terms of Use | Privacy Policy | Do Not Sell or Share My Personal Information | Accessibility Statement
ThriftBooks® and the ThriftBooks® logo are registered trademarks of Thrift Books Global, LLC