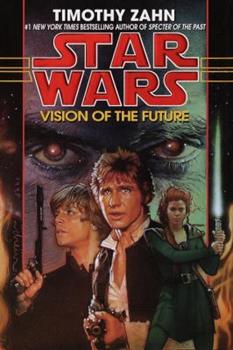 Vision of the Future

(Book #2 in the Star Wars: The Hand of Thrawn Duology Series)

Vision of the Futureis the second book in the epic two-volume seriesThe Hand of Thrawnfrom Timothy Zahn, the bestselling, Hugo Award-winning author of the original landmark trilogy based on George Lucas's legendary Star Wars(r) films. Now the story begun inSpecter of the Pastcomes to an explosive conclusion as Luke Skywalker, Princess Leia, and Han Solo are thrust into the middle of an impending civil war--and discover the shocking truth behind the...

Published by Thriftbooks.com User , 20 years ago
Where do I begin? I have often thought that the first trilogy Mr. Zahn wrote was the best of any post "Return Of The Jedi" Star-Wars story written. His return here is spectacular. The usual political intrigue and fast paced battles abound, described as only Mr. Zahn could do it. I loved the fact that Jedi Master Luke Skywalker still had to be a "student" about some things was refreshing and made for a great read. The interplay between Luke Skywalker and Mara Jade is BEAUTIFULLY written and made me smile, cheer... and yes... even cry, and I am not ashamed of admitting this. (Yes, men can cry too. :) )) If you liked Zahn's first Star Wars trilogy (Heir To The Empire, Dark Force Rising, The Last Command), you OWE it to yourself to get this book. Enjoy another visit to a galaxy far, far away. Mr. Zahn is an excellent tour guide as this work proves.

Published by Thriftbooks.com User , 22 years ago
I've been waiting. And waiting. And waiting. I've read about Luke training new Jedi, about Han getting ambushed at Corrillea, and about countless other things that have never solved the one problem that haunted me...WHEN WOULD LUKE AND MARA FALL IN LOVE? It seemed from the first trilogy Zahn wrote that he created Mara Jade simply so she and Luke could fall in love. Of course, it's been hell reading these other novels and not having a relationship develop between the two. Callista and Gaeriel? Nah, Gaeriel was a bad idea, and Callita just wasn't Mara Jade. So anyway, I should probably say more about this book than just how wonderful it is that Luke and Mara finally fell in love (which of course is the best part of the book). The mystery behind the Hand of Thrawn was perfect. And since I happen to like Pelleon a lot, I loved how Zahn described Pelleon as a good guy working for the Empire, who really wanted peace. And finally, to top it off, the Empire has finally been defeated, and won't come suddenly sneaking back with endless fleets of ships and powerful warlords (basically every other book). This could definitely be a place to end the whole 'Luke, Han, Leia' series, and begin perhaps twenty years in the future with Luke and Mara's children, or Han and Leia's (but I like saying Luke and Mara's more). Anyway, congrats to Zahn, who has single-handedly proven himself to be the master of the Star Wars universe. Buy this book - unless you're some anti-Luke fanatic of death, I promise you'll love it.

YAHOO! LUKE MADE THE RIGHT CHOICE!

Published by Thriftbooks.com User , 22 years ago
man, luke finally got his head on, if you ask me. Callista was too fickle and , forgive me, old. The girl who started with a G, well, luke was a little not himself then. until i read this, i thought luke and callista should have gotten together. mara and luke make a great team. their little welding thing made it not at all mushy, something perfect for someone who loves Star Wars adn all it's action, and is not too keen on romance. that would be me. thank you, zahn! now, all the other stuff was okay, but you have to understand that those were delicate politics. i loved the look into coruscant and new republic and bothan (?) politics. the whole chiss thing was cool, too. i didn't sweat through it. it's really different from his first trilogy, but it still has zahn's fingerprints and signature and name and all whatnot all over it. i'm a fan of luke and i think he finally got his head on straight. all in all a good book, but you have to appreciate and understand a few politics to enjoy the 300 pages full of it. more a read for adults, but kids can love it, too!

Published by Thriftbooks.com User , 22 years ago
Mr. Zahn has outdone himself. The conclusion of the exciting "hand of Thrawn" series is just about perfect. It reads quickly, has plenty of action, great dialogue, and even good romance. An additional bonus is just about every character related to Star Wars is in this book. From Corran Horn, Karrde, Mara, Wedge, Lando, the droids, Luke, Leia, Han, the Noghri, Pellaeon, etc... The only exception is that Chewbacca is away throughout the entire series, but you really don't miss him because there is too much going on. Everything from an emminent civil war, secret Imperial raids, secret fortresses, undercover espionage, and the usual space battle keeps you glued to the book until the last page is finished. Luckily, there aren't even any really slow or boring parts that unfortunately creep into most of the recent Star Wars novels. Welcome back, Timothy Zahn!

The Force is Strong with this One

Published by Thriftbooks.com User , 22 years ago
Some of these reviews are great; they really are. Almost as good as reading the book itself. Its good to see that so many readers get so emotionally attached to the characters; emphasised particularly well with the war of words between Mara and Callista fans. And to think that the two women didn't even feature in the movies. People seem to either love or hate the outcome, and that is always a sign of a great novel. Personally, I loved the outcome!As with any good SW novel, there is plenty of sci-fi action and plot enhancement here, but it does however take a back seat to character development. Yes, this is very much a character-driven novel; in particular with Jade and Skywalker (still can't get over how cool this name is!). OK, so the issue of the dynamic duo getting married is perhaps the worst kept secret on the Internet, but what makes this such compelling reading is down to the way in which Zahn executes this theme. There were so many barriers existing between the two, not to mention the emotional turmoil and personal demons which needed to be overcome before they could establish a relationship.I also loved the way Zahn resolved the Lando/Mara issue without making Lando come across as the bad guy. For all his faults, Lando is a key figure in the SW universe and deserves positive attention, and it was nice to see him lead the Republic forces at the end against those nasty Imperial Star Destroyers.It was also interesting to note that one or two readers felt too much of the novel was taken up by Luke and Mara. I wonder why they thought this; I for one would not have minded in the slightest had the entire book only consisted of these two characters. And lets face it people, we would have even willingly seen the Empire win if it meant Luke and Mara getting together in the process.There is not much I can say to fault this novel, but there is one little aspect which affected me on a purely personal level and one which I felt we could have done without. I am referring to the smuggler's tale of the titanic battle between a dark Jedi and Yoda. I have always believed that Lucas depicted Yoda as the apotheosis of all that is Jedi with the exception of using the force to do battle. We did not see the little master fight in any movie and I firmly believe we will not do so in episodes 2 and 3, because to do so would degrade the single most unique character of the Star Wars universe. Therefore I felt Zahn could have easily omitted this part without detriment to the quality of the story. However this is just one minor flaw on a purely personal level.On another personal level, as a huge Mara fan (who can never again watch "Return of the Jedi" in the same manner!), I thoroughly enjoyed the new insights we got to see in Mara. For example, other peoples' opinion of her matters greatly to her (such as Han's impression when seeing her wearing Lando's shirt). Moreover, the fact that (and why) she has never been in a relations
Trustpilot
Copyright © 2022 Thriftbooks.com Terms of Use | Privacy Policy | Do Not Sell or Share My Personal Information | Accessibility Statement
ThriftBooks® and the ThriftBooks® logo are registered trademarks of Thrift Books Global, LLC