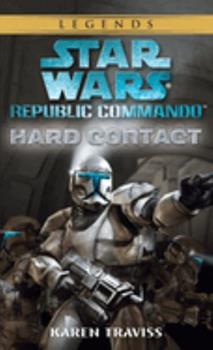 As the Clone Wars rage, victory or defeat lies in the hands of elite squads that take on the toughest assignments in the galaxy-stone-cold soldiers who go where no one else would, to do what no one else could. . . . On a mission to sabotage a chemical weapon research facility on a Separatist-held planet, four clone troopers operate under the very noses of their enemies. The commandos are outnumbered and outgunned, deep behind enemy lines with no backup-and...

Published by Enia , 2 years ago
The clones are characters I love, and I would have loved to see more of them on the big screen. Definitely recommend the Republic Commando series for fans of the clones and those who want to get a glimpse of the interactions we could have had on screen.

Published by Thriftbooks.com User , 13 years ago
Here is another example of why only two and not the third (True Colors) included in this hardcover book? Why isn't there a way to know this is coming so that an individual who wants to collect these books can get them in hardcover or know that paperback is the only way????? I think it is a way for publishers to make extra money and no, I don't think it is very funny. As for both books they are very good to read, but would have been better if they would have included number 3 (True Colors). The book arrived faster than I thought and in excellent condition and for that I am happy, but not for buying three paperbacks and then find it in hard cover and then not even including number 3!!!!!!!!!!!!!!!!!!!!!!!

Awesome insight into the lives of clone troopers

Published by Thriftbooks.com User , 16 years ago
So many Star Wars books focus almost exclusively on the saga's main heroes, especially the many post-Return of the Jedi adventures of Han, Luke, and Leia. This can make for a smaller-feeling universe than I like to imagine for the galaxy far, far away. Republic Commando: Hard Contact is a brilliant step away from the characters of the films, not featuring a single scene with anyone we know from the movies. Karen Traviss has real-life military service on her resume and it serves her well as she explores life in the Grand Army of the Republic. When introduced in 1977, stormtroopers were the faceless minions of the Empire and primarily served as cannon fodder for our heroes. We never saw any faces under the white helmets and rarely saw one manage to shoot straight or show any particular aptitude for soldiering. With the prequels, George Lucas brought us a fascinating origin story: we learned that the stormtroopers' predecessors were clone troopers and the men in white served the Jedi in the Old Republic! Along with this new story came a higher visible level of competence from the troops onscreen. Traviss takes this to a whole new level with her crack team of Republic commandos named Omega Squad (the commando concept was possibly inspired by a throwaway line in Attack of the Clones at the Battle of Geonosis, when a clone trooper informs Mace Windu that five commando teams are standing by). Through the course of this book, the clones are transformed from one-dimensional supporting characters into fully fleshed-out human beings with some seriously interesting perspective on why they exist and what life is all about. These men did not ask to be created and sent to war, and any thinking Jedi must confront the uncomfortable reality and the extremely shaky ethics of sending these men off to die in battle against the countless droid armies of the Separatists. We get a main Jedi character who does just that in Etain Tur-Mukan, a confused and not-so-terribly-powerful Padawan whose master has just been violently taken from her. Her inner conflicts about the clone commandos who look to her for guidance and leadership make for compelling reading. Traviss handles the interactions between Etain and her team, especially with Darman, the clone Etain favors most, with grace and aplomb, writing the early awkward stages of their initial contact as well as their cohesion into a single working team by the climax of the book. Qiilura is a memorable world of the many we encounter in these books. Most residents are living at subsistence level, barely scraping by on what little profit the Trade Federation permits them to retain. They seem to be obvious victims, but some doubt is introduced by the presence of the Gurlanin, native shape-shifters who have seemingly been persecuted viciously by the planet's more recent inhabitants. Ghez Hokan also has slight shades of gray; definitely a villain, but never one of the cackling, mustache-twirling variety. I appreciate how m

Surprisingly rewarding-Among the best of the Star Wars Books

Published by Thriftbooks.com User , 17 years ago
Let's be honest-most of these Star Wars novels are poorly constructed at worst, formulaic at best. We read them because we like the Star Wars universe and enjoy reading books set there. This novel is the counterpart to a videogame, setting the bar even lower. How surprising to discover that this is actually an extremely well-crafted bit of miliatry/sci-fi writing. I enjoyed this book immensely, and would have been satisfied by far less in terms of complexity, character development, and writing style. Although the plot revolves around a commando team on a dangerous mission with a Jedi Padawan, the book is really about the culture of the Clones and gives the reader a fascinating look into the culture of the clone troopers as a whole. Darman, the lead Clone commando, is by far the most interesting character in the book, outshining the Jedi Padawan by a long shot. The Clones come off as heroic yet tragic figures, born and bred for war but with the capacity to understand peace and enjoy levity. Accelerated in growth to be ready to fight but of normal emotional devlopment when confronted by emotionally challenging situations. More of the Star Wars books should be on this level. It raises the bar for the whole series.

Published by Thriftbooks.com User , 17 years ago
I was worried when I picked this book up that I'd overhyped it in my mind. I'd only read one other book by Karen Traviss, her excellent CITY OF PEARL (though now I've also read the sequel, CROSSING THE LINE, and heartily recommend them both), and while I'd liked it quite a bit, I was wondering if perhaps I wasn't looking forward to RC a bit too much. I needn't have worried. I think I mentioned in my review of the first MedStar that one of the things I liked about it was the Wraith Squadron vibe from the assortment of eclectic, non-movie characters. Similarly, I get a great X-Wing feeling in RC, not only with the non-movie, imperfect characters, but also the whole military side, the impossible mission, impossible odds stuff. The action and introspection were well-balanced; the violent scenes in CITY OF PEARL I thought were some of the weaker scenes in the novel, so I was pleasantly surprised by how much better and more clearly the violence was handled here. The book was a quick read, but a lot more thoughtful than any other Clone War novel so far besides maybe Shatterpoint. The portrayal of the Clones themselves is far superior to that in Cestus Deception. It seems wrong that one of the finer Clone Wars novels will probably sell fewer copies thanks to the fact that it's marketed as a video-game tie-in with no movie characters.

Published by Thriftbooks.com User , 17 years ago
In a rather ironic moment, Hard Contact is so far the Clone Wars novel that best exemplifies the common conception of the Wars--but it doesn't have the logo on the cover. As befits a novel based on a first-person shooter, Karen Traviss's Hard Contact is not a novel about sitting around and talking, as others have been. Much as MedStar was "a day in the strife" for the non-combatants in the war, Hard Contact does the same for another neglected group: the clones themselves. (Perhaps this is why the earlier novels have seemed peripheral, plotwise: for all their seeming importance, the Jedi don't seem to do much in the war.) Hard Contact is a showcase for Traviss's abilities. Her worldbuilding talents were used to create the environment of Qiilura, with its new flora and fauna that play a non-trivial role in the story. The background of the commandoes--of the clones in general--is also essentially produced from whole cloth, and manages to be distinctly, though not overtly, Imperial. She also managed to create distinct characters among the commandoes--and provide justification for it, something not really seen before. None of the four come across as cardboard. Another point worth mentioning is the sense of humor--Traviss doesn't go overboard with it, but the clones offer us some of the best quips since the Wraiths. The same can be said of the other characters, as well. Unlike other recent novels, the "villain" is a complex character in his own right, as are the other antagonists. Traviss does a good job of showing the breadth of the Separatist movement. Some of the minor characters (read: the two-scene cannon fodder) are a bit flat, but there's really not much opportunity to avoid that, either. All in all, Hard Contact is an excellent read, being what many were expecting from the Clone Wars. Don't be fooled by the ties to a video game; Hard Contact is the best SW novel since Shatterpoint (and perhaps earlier, depending on what you're looking for). We're lucky to have Karen Traviss writing Star Wars.
Trustpilot
Copyright © 2022 Thriftbooks.com Terms of Use | Privacy Policy | Do Not Sell or Share My Personal Information | Accessibility Statement
ThriftBooks® and the ThriftBooks® logo are registered trademarks of Thrift Books Global, LLC