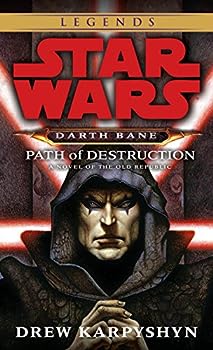 This description may be from another edition of this product. "Two there should be; no more, no less. One to embody the power, the other to crave it." -Darth Bane, Dark Lord of the Sith On the run from vengeful Republic forces, Dessel, a cortosis miner, vanishes...

There's a reason it's considered the best.

Published by Hayden , 6 months ago
Path of Destruction is not only a brilliant and enticing way into a terrific trilogy of novels, it effectively stands as its own as a fantastic read. It is quite dark (there is one part especially near the end that would probably not be suitable for especially young children) but on the whole it manages to tell a chilling story of a villian without delving into unnecessary amounts of gore and violence. It manages to telling the story of someone who there can be no doubt is the bad guy - and yet it is extremely difficult to not route for him, or at least be emotionally invested in some way or another. All in all, a brilliant book that is a must read for any star wars or science fiction fan. It requires little to no knowledge of the films as it was set over 1000 years before them.

One of his best

Published by Thriftbooks.com User , 13 years ago
After reading Mass Effect Revelations by Drew Karpyshyn I wanted to read more by him. This book I think was even better and I flew through it, it is a real page turner for any Star Wars fan. It is also fun to read a book from the Sith point of view.

Published by Thriftbooks.com User , 14 years ago
This is an excellent insight into the basis of the dark side. Very well written, moves along, and very enjoyable. Hard to believe that this author isn't an established novelist. The descriptions are excellent and the style gives you a sense that your in the mind of someone that is undergoing transformation. I'm not sure why that 1 star reviewer is so bent out of shape with the violence. He mentions Vader as a likeable "antihero". I distinctly remember in one of the movies Anakin slaughtering mercilessly the younglings or toddler/child jedi off camera. In the fictional SW world, the sith are evil, and that's what evil does. All and all a worthwhile read and definitely not a waste of time. If only the movie scripts were written this well...

Could not put it down!

Published by Thriftbooks.com User , 14 years ago
I have been a Star Wars fan since I was 13 and waited in line with my Dad for four (4) hours to see Star Wars (A New Hope). I have read everything as it has come out since then and frankly this book just about made me forget to go to work!! I was spellbound by the detail in which the author used to describe the Dark Side of the Force. The character development was excellent. The battle scenes were written very well and I could visualize in my mind the darkness of the Brotherhood of the Sith and even more the mission that Darth Bane embarked on. I could feel his anger! We need more dark side novels like this!

Published by Thriftbooks.com User , 14 years ago
Okay, we all know the premise: Sith bad; Jedi good. Alas, we haven't really gotten much insight into what makes the Sith tick until now. I really enjoyed this story. Bane is easy to like, even as he becomes an anti-hero. The characterization is excellent, definately at the top end of the "typical" Star Wars novel. The pacing is first rate too. The action moves rapidly along but not at the expense of important plot details and background information. Two of the more interesting scenes where when Bane, poisoned and dying, runs across a family scrounging for supplies around a deserted battlefield. He is able to not only kill them, but draw strength from their pain and suffering to prolong his life until he can find help. Further, he is not upset with Githany for poisoning him. In fact he appreciates the way in which she pulls off her deception. Intrigue and betrayal... very Sith! The very reason why the order does not work until it is reduced to two. One to embody the power and one to crave it. It's aspects like this that really bring the book to a higher level. Tidbits like the thought bomb and similar Sith rituals are very cool too. A very well done, highly entertaining read! I only hope there will be more like this.

Published by Thriftbooks.com User , 14 years ago
I am highly critical, and haven't liked most of the Star Wars books, but I must say that this one is awesome. My only criticism is that it doesn't seem right that Darth Bane learns the Force Lightning power while still a student (it seems that should have been a more advanced power to me). Other than that, this book was perfect. Very nice!!
Copyright © 2020 Thriftbooks.com Terms of Use | Privacy Policy | Do Not Sell My Personal Information | Accessibility Statement
ThriftBooks® and the ThriftBooks® logo are registered trademarks of Thrift Books Global, LLC