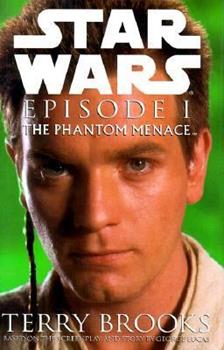 In barren desert lands and seedy spaceports . . . in vast underwater cities and in the blackest depths of space . . . unfolds a tale of good and evil, of myth and magic, of innocence and power. At last the saga that captured the imagination of millions turns back in time to reveal its cloaked origins--the start of a legend--the story of STAR WARS. Based on the screenplay by George Lucas, this novel by master storyteller Terry Brooks probes the depths...

Published by Ravenhoot , 2 years ago
This novelization is fantastic. It gives so much more insight to Anakin as a child and his journey to becoming a Jedi. It's a very easy, quick read if you love Star Wars!

Published by Thriftbooks.com User , 21 years ago
Only "Trials and Tribbleations" has put me into the story in a better style. Second best in a bunch of books that tend to be overblown and often lose me in yards of useless exposition.Terry Brooks does a wonderful job describing the characters and their situations. He creeps into the heads of the characters and helps bring them to life further in the way only an author can. Qui-Gon Jinn is especially vibrant.There are some inconsistancies. The end battles and swordfighting in the book is somewhat different, I think, from the movie's version; it includes many lines of dialogue cut from the movie (not that I'm complaining); Jar Jar seems more competent; and Brooks seems to be very vague on Queen Amidala's clothing. None of these significantly detract from enjoyment of this novel. Read it if you've seen the movie! You will not be disappointed.

Almost as good as the movie

Published by Thriftbooks.com User , 21 years ago
If you've seen THE PHANTOM MENACE(and who hasn't!) and you read this book before you see the movie than you may be dissapointed when you see it. Not that it's a bad movie just that the book adds soooo much more that you may wonder where it is when you see the film. Even though this is a great book I would definately recommend seeing the movie first just so you could visualize while you read. In conclusion, if you want to know a larger story on THE PHANTOM MENACE read this book but if you don't care about anything STAR WARS unless it's in the movies than don't bother with this or any other of the great STAR WARS novels , but you will regret it.

Published by Thriftbooks.com User , 21 years ago
I love this book! It covers everthing in the movie and so much more. It is more descriptive than the movie. And makes the movie better when you see it because you know more of Anikin's backround. It really fills in the gaps left out in the movie and Darth Maul doesn't say much but he says more then the "yes master" in the movie. The author does well describing the events so you get more of a feel of the settings even more than in the movie. Well Done!

Some food for thought to all negative reviewers

Published by Thriftbooks.com User , 22 years ago
Let the man work!! I can't believe how many Star Wars fans were dissapointed because Ep1 didn't turn out the way THEY envisioned it!! Star Wars is George Lucas' baby, who are we to tell him what comes next or who dies and who lives!?! As for Terry Brooks, I think he did an excellent job doing the adaption, especially if you have read the adaptions for the 2nd trilogy (Ep4-6). You might as well have bought the screenplay for those novels. Sure there are a few things different, like editing out the character's names next to their lines and Threepio smiling a lot(if you don't know what I mean, read Ep4 by GL), but overall, the books are just scripts. Phantom Menace devles into the plot a lot better and gives us background detail which better illuminates statements made by the characters (Like, 'Always two there is: a master and an apprentice'). The pod race scene, which is highlighted in both the book and the film IS central to the story and needed the attention tht it got. It shows Anakin's unusual power in the Force. Its one thing to hear that he is stronger than Yoda (who is how strong?????) Its yet another to see that strength in action. The book shows this a little bit better than the film since we cn see the effort involved...Anakin makes it look easy, we don't get to see the Force at work since its invisible. So, to ANY and ALL people who think they were let down by the movie, the soundtrack or the book, I quote William Shatner, 'Get a Life'!!!!!!!

Published by Thriftbooks.com User , 22 years ago
This is THE book for any true Star Wars fan. It introduces important characters and gives insight into their relationship. Obi-Wan's initial reaction to Anakin is intriging considering what we know about their future. Most important it gives us true fans insight into the past of the Sith order and the origin of the Force, an important element in the Star Wars universe. I also think that Jar Jar is getting a bad rap. his is an important role in the book. He acts as a comic relief, much like C-3PO did in the original trilogy. I was also thrilled to read about the Republic Senate and the Jedi Council, two important bodies in the new trilogy. This novel hasn't ruined anything for me. Actually, I want to see the film more now than ever, if that's at all possible. The ending was absolutely fantastic. I don't want to give anything away, but if you pay attention to the first trilogy you can pretty much guess what will happen at the end of this book. The whole experience was outstanding and the film promises to be even more so.
Copyright © 2020 Thriftbooks.com Terms of Use | Privacy Policy | Do Not Sell My Personal Information | Accessibility Statement
ThriftBooks® and the ThriftBooks® logo are registered trademarks of Thrift Books Global, LLC