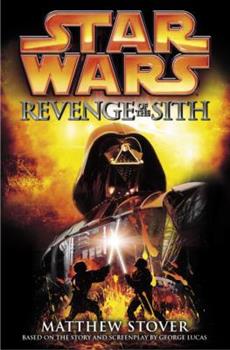 Two New York Times bestselling novels have been packaged together in one block-buster volume.

Condition of book was good

Published by Dylan , 1 year ago
Currently reading this. Fanstastic so far. The condition the book came in was good. Happy with it.

Published by Ajepp15 , 2 years ago
Obviously you could take any substandard movie and write in each character's internal monologue until their actions made sense. But to see this treatment on such a famous trilogy is rare, and these books really do redeem the films in my mind, even if they had little to do with Lucas' vision. Anakin's betrayal makes more sense. Padme is given more of a role in the story. Obi-wan is still awesome. Fleshing out this story really does create an entirely new one. Rewatching the films after reading the novel makes the entire experience a little more enjoyable.

Published by Ravenhoot , 3 years ago
This book is a must-read for anyone who is a fan of the film. There are several moments that give really good insight into Anakin's growing darkness and how he got to the point of turning to the Sith. It really shows how much pressure he felt and what he was thinking. I absolutely recommend reading this book because it ties us so many loose ends and brings things together really well.

Well Done but it still needs to more extense

Published by Thriftbooks.com User , 12 years ago
This is an amazing book. I bought it 'cause I'm a huge star wars fan. I read it and it really explains the story like if you were in Coruscant, Mustafar and Utapau. It also has deleted scenes from the movie and all-new-scenes. There's only one flaw: there's missing some scenes from the battle of Coruscant and Kashyyk was kind of missing. But even though, it's really satisfactory and pretty complete.

Published by Thriftbooks.com User , 16 years ago
I loved this book for countless reasons. The action, the excitement, the sadness, everything! Unlike the novelizations of Episodes IV to VI, this book doesn't simply convert script into prose. The novel catches the very heart of the Saga, portraying the tragedy of Darth Vader in a way I would have never thought possible. Every moment from the film is maintained, but with even more added. The emotions of the characters come through as if you are the character. The writing style is excellent, and has an emotion of its own. Like the characters, it makes you feel. When the theme is exciting, you feel excited. When the theme is sad, you feel sad. The book is like John William's spectacular soundtrack in this way. No emotion is left out. The book has you feeling sorry for Anakin and hating Palpatine. The descriptions give you a visual feel of everything, every small bit of the locations, items, and people. One of the novel's greatest points, however, is its simplicity. The subtlety of the previous two novels is lost here, which was a great risk on the author's part, but was well rewarded. The plot moves faster and smoother. The well executed analysis of the story digs into all the exciting parts and simply throws the story at the readers face in an invigorating, stimulating and intoxicating way. The novel does everything it should. It's fun, exciting, stimulating, mind blowing, but most of all, heartbreaking. You will feel for the characters as much as they feel for the other characters. You understand Anakin's motives for turning to the dark side so well, I wouldn't be surprised if the reader turned to the dark side themselves. Revenge of the Sith is not written as Science Fiction. It's not written as Fantasy or Action/Adventure either, for that matter. Revenge of the Sith is pure space opera, pure Star Wars in all its glory. Overall, this is a book that no one can miss, Star Wars fan or not.

Questions are answered. Gaps are filled.

Published by Thriftbooks.com User , 17 years ago
I gave this book the highest rating because it is one of the best of its kind. This is definitely one of the best novelizations of a movie I have ever read. I read it before viewing the film and it added depth to characters and motivations to their actions that were hard to find in the movie. This story fills in most of the plot gaps between Star Wars 1 and 2 and The New Hope. I won't recap the plot, but here are some highlights. This book clarifies how Anakin's fear of loss (of his wife Padme) drove him from one bad decision to the next and eventually into the position of apprentice to Darth Sidious, Sith Lord. A primary teaching of the Jedi is to release attachment to things and people, for these attachments cause weakness and distraction. Anakin will no-doubt become the textbook example in the next Jedi school. How can 1 Sith (and his apprentice) outwit and eliminate the Jedi? The Jedi had become complacent in their teachings and practices. Too late, Yoda realizes this and is forced (no pun intended) to retreat into hiding on Dagobah (where we find him in The Empire Strikes Back). How does democracy fall? With cheering and applause, according to Padme Amadala, as the Chancellor maneuvers, lies and schemes his way into position as Emperor. The Clone Wars serves the same purpose as the 9/11 attack in making people WANT to surrender their rights - a la the Patriot Act . Watch as Palpatine outwits everyone, including the 900-year-old Yoda. The writing is well done and I loved the layout and approach the author takes. Read this books before you see the movie. Read it after. Or read it while you watch it.

Published by Thriftbooks.com User , 17 years ago
First of all, let me tell you a little about myself. I am an avid reader, however in the past four years I have been in college and haven't gotten to physically read very many books. Therefore I have turned to the UNABRIDGED audio books for the books that I really want to read. I have hundreds of these audio books personally including the majority of the Star Wars Audio Books. Out of all of the audio books I have listened to in my life, this has got to be in the top two. This audiobook is read very nicely and it is easy to understand the person who is reading it. The story itself is really great. It takes place a few years after Episode II: Attack of the Clones and about 20 years before A New Hope (aka Star Wars 1977). It tells about the fall of Anakin Skywalker to the darkside of the force as well as the Fall of the Republic. The thing I really enjoyed about this presentation, is that first of all it is Unabridged. Then one of the biggest reasons I liked this audiobook, is because it incorporates sound effects and music from the Star Wars movies. Including blaster fire, John Williams' score, lightsabre sounds. The reader also uses different voices for each of the characters. Some of these voices are also enhanced by the computer generated sounds for example General Grievous sounds very much like a cyborg. The voices for Anakin and Obi-Wan are very close to those of the actors portraying them in the movies. If you are thinking about buying the audiobook of Revenge of the Sith, I would tell you the best set to buy would be the unabridged edition it has little areas which are most likely not in the movie that helps to explain other portions of the plot. Thank You For Reading My Revue!

Published by Thriftbooks.com User , 17 years ago
This is how it feels to be Anakin Skywalker: The Hero With No Fear is what he's called, but it isn't true. Fear is his constant companion. He fears for those he loves, especially his secret wife, Padme Amidala. Dark secrets are revealed and loyalties are pushed to the breaking point. His love and dreams are falling apart before his eyes. No longer does he feel he can trust those he's considered his closest friends. He isn't even sure anymore the side he has been fighting for in the Clone War is the right side. Revenge of the Sith doesn't start out very dark, with lively banter between Anakin and Obi-Wan Kenobi, but as it progressed I found it to be the darkest, saddest, definitely the most emotional Star Wars book I've ever read. It was obviously one of the more difficult books to write but I think Matthew Stover did an excellent job. As a hardcore Star Wars fan I found everything I would want in this book: the greatest lightsaber duals ever dreamed up; enough built up suspense to drive a person nuts; an in-depth look at all the characters in the book, from the small role of Count Dooku to the Sith Lord, Darth Sidious; and a climax to end all climaxes. However, I do think that a Star Wars fan of any level could enjoy it and won't become very confused if they haven't read all the book between Episode II and III.
Trustpilot
Copyright © 2022 Thriftbooks.com Terms of Use | Privacy Policy | Do Not Sell or Share My Personal Information | Accessibility Statement
ThriftBooks® and the ThriftBooks® logo are registered trademarks of Thrift Books Global, LLC