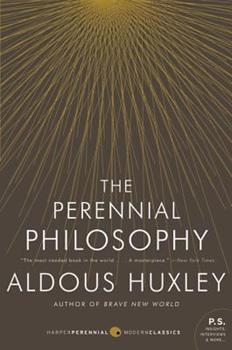 An inspired gathering of religious writings that reveals the "divine reality" common to all faiths, collected by Aldous Huxley "The Perennial Philosophy," Aldous Huxley writes, "may be found among the traditional lore of peoples in every region of the world, and in its fully developed forms it has a place in every one of the higher religions." With great wit and stunning intellect--drawing on a diverse array of faiths, including Zen Buddhism, Hinduism,...

Published by Thriftbooks.com User , 18 years ago
_The Perrenial Philosophy_ is a masterpiece of English literature - one of the most important books of the twentieth century written in our language. It is the ultimate introduction to all forms of Eastern philosophical and religious thought. But it is more than just an introduction; it is a comprehensive and exhausting crash course in Eastern religion. This book is an indispensible guide to improving the quality of life simply through a change in attitude. There is an unreal amount of information crammed into this volume. It is in fact a "bible" of sorts. If our society were to be annihilated in some sort of catastrophe, and only one book were to survive for the remaining people to discover, this book would probably be the most advantageous one they could find. It may not be the most profound book ever written, but it is extremely valuble because of the amount and variety of historical information conveyed. It provides wisdom from the viewpoints of dozens of important philosophers and religious thinkers, and reads like some kind of greatest-hits albulm. There are other works that may be more modern and far-reaching, and others that may be more unique and individualistic. But the _Perrenial Philosophy_ accomplishes exactly what it set out to do, which is catalogue and explain profound quotes from a wide variety of great thinkers. Some readers might have preferred that Huxley interject more of his own ideas, but if you want to benefit from the wisdom of dozens of great authors without having to buy each one of their books (if they're even available), then I highly recommend that you buy this book.

Published by Thriftbooks.com User , 20 years ago
I found this book quite accidentally as the last thing on the floor of an aquantances apartment as I was helping him move, and it has totally changed my life. Never before have I come across anything that so eloquently brought together the pure essences of the worlds major religions in their pure and simple truth.This book is bound to upset any adherents to one certain religion, as it uncovers the binding truths of them all. It is no Bible, no Koran, no Torah, no Bhagavad Gita, and yet it is all of them and more. It makes no steadfast claims or demands as many religious/spiritual books tend to do. It gently unfolds its spiritual message in a simple and awe inspiring way. I could not recommend this book highly enough to anyone seeking a spiritual truth. I myself did not know I was, and it showed me more than I could have ever hoped to have seen.

Wonderful wisdom that is indeed perennial

Published by Thriftbooks.com User , 21 years ago
This is one of the most comprehensive and well written books on the mystical path, which is the core of the religious/spiritual experience. Huxley unites all the world's traditions offering the intrinsic philosophy underlying all paths to God. I humbly recommend this book to anyone seeking an understanding of the sometimes hidden truth in religion.

Published by Thriftbooks.com User , 21 years ago
I first read this book 43 years ago. It impressed me because in those years, for me, everything was separate. Since I first read this book, (at least six times since then) I am now convinced that the mystical experience is identical, no matter which particular way you choose. I highly recommend this book to every soul who is uncertain about which way to go to find IT. You will learn that IT is everywhere no matter the path YOU choose. All religious and transcendental experience point the same way and Huxley proves it in his work; a transcendental and enlightening insight on this subject. This book is a must for the seeker, as well as for the enlightened, as a documented proof of the oneness of the Universal Truth.

An indispensable manual of right thinking and living

Published by Thriftbooks.com User , 22 years ago
Some time in the last century, Thoreau lamented that the "Bibles of mankind" were neglected even among those making a serious attempt to understand the Jewish and Christian ones. In the years since, many anthologies and expositions of sacred writings have endeavoured to repair the gap, few perhaps as successfully as this one. Like a Boethius for the modern age, Huxley delineates the universal and timeless truths enunciated by the sages of preceding centuries, interspersed with his own perceptive and serenely illuminating remarks. This is a book to be carefully pondered and studied with others. I can think of no other which so deserves to be the Vade Mecum of the spiritual journey -- the road map to guide you onward. Ultimately your conception of the "perennial philosophy" may differ from Huxley's, but I am sure you will value his contribution toward its elucidation, and may well agree that several of his original passages merit inclusion in its eternal canon.
Copyright © 2020 Thriftbooks.com Terms of Use | Privacy Policy | Do Not Sell My Personal Information | Accessibility Statement
ThriftBooks® and the ThriftBooks® logo are registered trademarks of Thrift Books Global, LLC