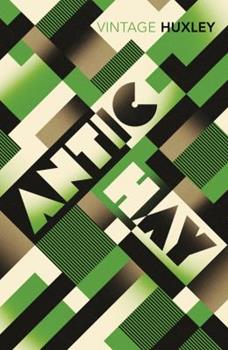 This description may be from another edition of this product. Portraying the revolving clash between class ideals, Antic Hay is a stunning cultural critique on life in London circa 1923. With a sharp comedic edge, author Aldous Huxley delivers a novel of ideas...

Published by Thriftbooks.com User , 13 years ago
criticisms of this book as being plotless or "a novel of ideas" make little sense to me. so far as i know great art is often unconventional, and i personally found this to be a very intelligent and entertaining meditation on society and human nature wrapped in precise, beautiful prose. sharp observations and a sadly humorous sense of absurdity permeate each page as huxley examines various facets of the human condition through his characters thoughts, pretensions, and actions. the book never reaches any conclusions about it's subject matter and is structured as a loosely interconnected series of vignettes, but there's nothing wrong with either unless you have very narrow ideas about what a book should be. enjoyed it immensely.

Published by Thriftbooks.com User , 14 years ago
I have to say I enjoyed this novel, as I have almost all of Huxley's other writings, for the light it shines on a particular segment of society in an interesting if confused time. Huxley employ's his characteristic wit and satirical prose in telling the tale of a mixed group of Londoners in the 1920's, all seeking to make sense of a life, and perhaps more importantly to derive pleasure from it, that has lost it's focus somewhere along the way. The protagonists range from pedants, academics, failed artists, journalists, scientists, and the idle rich and the just plain idle. Their interactions with one another form the loose framework of the story, although it seems really to be about each person's individual pursuit of their own particular pleasure. I say it seems to be about this because it is hard to put your finger on a single theme. Some will have trouble with this novel as it lacks a serious plot device or any culmination of the story in a climax. It certainly does not fall into the same category as some of Huxley's more famous fictional works such as Brave New World or Island. Those who care to give it a chance though may be delighted by what they do find, namely a snapshot into the life and society of the pseudo-aristocratic circle in the inter war period in Britain. The time was one of change in society; a break from the past was clearly in the midst of happening, but no one was sure where is was leading, if anywhere. In this sense the novel and the characters really capture the essence of the time with their apparent frivolity and absence of direction. It is still a very readable novel, although at some points it is clear that the amount time that has passed since its publication in the 1920's has left become too large a gap to overcome. Although Huxley is a greater writer and many of his works have stood the test of time, Antic Hay is not one of them. Still the novel is packed full of humorous moments, for example Theodore's giddy glee at the prospect of joining the ranks of the capitalist with his bound-to-be-fantastic new invention: pneumatic trousers, and does good job capturing the spirit of the age, however confused that spirit may be. Huxley's command of the English language, as well as French and Latin, and his overall intelligence offer rewards to the reader outside the story itself. For those who appreciate a master performing his craft, Antic Hay will be a delight.

Published by Thriftbooks.com User , 20 years ago
Crome Yellow was Aldous Huxley's first book written when he was 27. The early Huxley was the best: when Huxley was young, he was fluid, enthusiastic, and his potential was limitless. As he grew older, he became more calcified, limited, and he spent the last years of his life in California, mired by his own mystic obscurisms. Crome Yellow centers around a house called Crome (like Wuthering Heights centered around a house -Abbey Grange) Crome was a gathering place of artists. The hero of the story is Denis Stone, a naive neophyte like Huxley was at the time. When Huxley grew more sophisticated, so did his characters. This book attacks the ennui, and existential malaise of life with a righteous indignation that is refreshing. He also uproariously endorses the common feeling of misanthropy that all refined cynics must feel. Huxley played the expatriate game, most of his life, to draw on his own words from Crome, he was "one of those distinguished people who for some reason or other, find it impossible to live in England." He spent most of the 1920's in Italy. Crome Yellow is a great introduction to Huxley, as well as a great way to know him better. It is difficult to believe that Huxley was so young when he wrote this. He writes like a 50 yr. old in this book.

Inflatable pants for every one!

Published by Thriftbooks.com User , 21 years ago
Huxley I can usually take or leave, but not Antic Hay: there are just too many farces to decipher for me to put it down. Huxley's women are beautiful and easy; his men are amoral and excrutiatingly clever. But underlying their antics is a novel of incredible complexity. Huxley makes his attentive readers squirm as we recognize our own pretensions and idiocies in his archetypal characters. Ouch, ouch, ouch.The other gift in this novel is that it has helped me appreciate and understand the work of other writers such as Waugh and Mitford: i.e., in order to enjoy them, you have to suspend your own understanding of life and realize that there actually was a thriving class of people in England who didn't have jobs, relied on servants, and had no lives to speak of. And were bored to tears by their sumptuous privilege, believe it or no.For modern readers, I'd say this is a pretty tough read. I know a respectable amount of both French and Latin, and I had to look up at least part of most of those passages. But if you're prepping for the vocabulary section of the GRE or the SAT...this book will provide you with myriad words to look up and learn, including the wonderful "callipygous".Maybe I should give the rest of Huxley's work another reading...

Classic insight into the English '20s and the fin de siecle.

Published by Thriftbooks.com User , 24 years ago
I have always admired the work of Aldous Huxley and this novel is one of the primary reasons. Set in post-war London, the story is focused on the attempts of a middle-aged Oxford Don (retired), Theodore Gumbril Jr., to break his middle-class shackles and become independently wealthy. He does this by inventing and marketing a pair of trousers with an inflatable backside, making long periods of sitting bearable. While this comes to fruition, Gumbril meets with, entertains and is entertained by his large and extremely colourful circle of friends. Each character is a perfect model for the varying classes, groups and styles of the '20s. To my knowledge, no one else captures so eloquently, humorously, and convincingly what it was like to be in London at the beginning of the century. The novel, luckily, is not confined to Gumbril and his associations, but delves in the lives of those associates as well. We learn of the intellectually and monetarily bankrupt artist, the impassioned physiologist, the wilting grand dame, the modern antichrist, the tailor and, of course, the father. The novel is a pleasure to read if for no other reason than to meet with and learn about these men and woman. Beyond the superficial pleasure of emersing yourself in the '20s and the lives of these individuals, Antic Hay offers something more. Huxley is both brilliantly insightful and cunningly witty, which provide his novels with a depth I thoroughly enjoy. Antic Hay, unlike so many other works, can be read again and again - each time offering you something amusing or interesting to enjoy and learn. I know this sounds cliché, but truly, Antic Hay tells the universal tales of men - loves lost and unrequited, mortality found and defended, knowledge found and lost. Reading this book I learnt that others have felt as I have, have thought as I have and most importantly, have acted as I have. There is nothing more reassuring than to learn that others have lusted after money, ruined relationships, and forgot what it truly important. I cannot recommend this book more highly. It provides wonderful entertainment for many a night as well accomplishing what all good literature should: telling us something important about ourselves. All my best, Justin.
Copyright © 2020 Thriftbooks.com Terms of Use | Privacy Policy | Do Not Sell My Personal Information | Accessibility Statement
ThriftBooks® and the ThriftBooks® logo are registered trademarks of Thrift Books Global, LLC