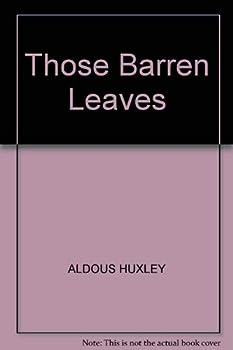 This description may be from another edition of this product. Aldous Huxley spares no one in his ironic, piercing portrayal of a group gathered in an Italian palace by the socially ambitious and self-professed lover of art, Mrs. Aldwinkle. Here, Mrs. Aldwinkle...

Published by Thriftbooks.com User , 14 years ago
Although Those Barren Leaves is technically a novel, it has no central plot. It is a series of interconnected and interweaving stories that are only slightly developed. All are left hanging. The setting is Italy sometime between WWI and WWII. The characters are vacationing at the Italian villa, a castle really, of a wealthy English woman, Mrs. Aldwinkle, and all are upper-class British intellectuals. Nothing much happens, there is a bit of love play and romance; no violence, no intrigue or crime, many lengthy polite conversations. Typically the characters are referred to as Mr., Mrs., or Miss so-and-so throughout. Amusingly Mrs. Aldwinkle plays a central and dominant role in the book but Mr. Aldwinkle is never mentioned, not once. Is he dead? On vacation elsewhere? One never knows, on one asks or seems to care. And so life drifts on serenely in the Italian sun among the Roman and medieval ruins. I liked several things about this book. The characters are interesting and Huxley has a way of bringing them to life. There are interesting and evocative descriptions of Italy, Tuscany in particular. I found the fact that momentous and terrifying world events were hanging over the scene silently in the background added poignancy to the setting and conversations. I kept thinking as I was reading how this world would soon be wrought by such unthinkable upheavals as the holocaust and Hiroshima. This is a leisurely book with many lengthy conversations about intellectual and philosophical topics. It is an opportunity for Huxley to vent his many ideas and theories in an informal way and to explore various upper-class characters in a satirical but still sympathetic way. Usually I am impatient with lengthy philosophic musings in a novel, but Huxley is so interesting that I found myself less irritated than absorbed, although I must admit that I skimmed much of the discursive portions. This is early Huxley, like Chrome Yellow and Point Counter Point. Those Barren Leaves is not a book for those who want a fast-paced, exciting story.

Published by Thriftbooks.com User , 18 years ago
Even better than the wonderful and somewhat similar CROME YELLOW, this novel of ideas can be alternately entertaining and exasperating. However, Huxley surprisingly drops mini-bombs of flashing insight here and there. In particular, the final chapter is a brilliant analysis (and prophecy) of the world-wide prevalence of suburban stupidity in place today. The fact that this book is out of print in the US in only one face of this stupidity.

Published by Thriftbooks.com User , 19 years ago
"And then you must remember that most readers don't really read...We all read too much nowadays to be able to read properly. We read with the eyes alone, not with the imagination." Thus speaks Mr. Cardan, a character in Aldous Huxley's "Those Barren Leaves," and all I can say in reply is, "Mea culpa, mea maxima culpa." Wanting to rush into the plot, I found myself annoyed with Huxley's slow, careful unfolding of the characters--the upper-class English guests at the Tuscan castle of the pretentious, amorous Mrs. Aldwinkle--and their long-winded conversations about Balzac and Diderot. I started to agree with Elizabeth Bowen's comment that Huxley was "the stupid person's idea of the clever person." After I had slowed down, however, and started to really read Huxley's painstaking dialogue and careful descriptions of the Italian countryside, I began to appreciate his brilliant evisceration of the motley crew around the impossible Mrs. Aldwinkle: Mr. Cardan, the Epicurean philosopher; Calamy, the amorist who is beginning to wonder if there is more to life than bedding women; Mary Thriplow, the novelist who never stops writing, even when making love; Chelifer, the disillusioned poet; and the hapless Grace Elver, a sort of female Forrest Gump without Forrest's lucky star. This wickedly funny yet meditative book repays the work of thoughtful readers, it has much to say about what is really important in life, and how expert people are at self-delusion. People who liked "My Dinner with Andre" or Robertson Davies' Cornish Trilogy should like "Those Barren Leaves."

A brilliant, funny and poignant novel

Published by Thriftbooks.com User , 23 years ago
A hard-to-find book--I came across it as a yellowed old paperback at a rummage sale, and I'm glad I did. Full of characters you're ready to hate, you end up loving nearly every one. Extraordinarily beautiful language, the writing is the cream of the crop. Not much of a plot, to be sure, as it is filled mostly with conversation that asks all of life's profoundest questions. He doesn't answer all the questions--no one can!--but gives you ample food for thought. The book is set in Italy after WWI, and abounds in beautiful scenery. Read it when you're relaxed and have time to chew on it.
Copyright © 2020 Thriftbooks.com Terms of Use | Privacy Policy | Do Not Sell My Personal Information | Accessibility Statement
ThriftBooks® and the ThriftBooks® logo are registered trademarks of Thrift Books Global, LLC