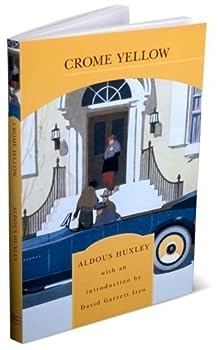 This description may be from another edition of this product. Aldous Huxley's first novel, telling a classic tale of social satire. Drawing on his own experiences at social house parties hosted by wealthy estate owners and attended by artists and writers...

Published by Thriftbooks.com User , 11 years ago
The book was in the condition that the seller stated it was in. The price was right and it arrived in a timely manor. This is all that mattered to me.

Published by Thriftbooks.com User , 17 years ago
Crome Yellow was Adolous Huxley's first novel. It describes the life of leisure of the Wimbushes, an aging aristocratic couple and the relatives and young intellectuals who are staying with them over the Summer in their estate at the village of Crome. It has often been remarked that this novel is unserious.There was not really much hilarity contrary to my expectation; the bulk of such stuff as there is was in the first part of the novel. The one passage which made me roar with laughter is Mr. Wimbush solemnly reading to his family and guests a particular excerpt from the history he has just finished of their estate which was built back in the 16th century. The founder of the estate was his wife's ancestor, Ferdinando Lapith whom Mr. Wimbush explains devoted his time to figuring out and publishing his ideas on sanitation. He built privies (indoor outhouses) at the top of each tower for he thought that the act of depositing human waste was such a degrading act for noble creatures like humans that they should be far away from the sanitation disposal system in the ground and as close to heaven as possible. He advised that the privy have a big window on which to look out at nature; a bible, Greek and Roman philosophy and other reading material on hand to console oneself in the act. Sir Ferdinando called his book "Certaine Privy Counsels by One of Her Maiesties's Most Honourable Privy Counsels, F.L. Knight." Mr. Wimbush says Sir Ferdinando wrote on the subject "with great learning and elegance" and Mr. Scogan, one of the Wimbush's guests expresses enchantment of such great achievements of English aristocrats. Other amusing incidents include the conversation between Denis Smith, the hero of the novel and Mr. Barbecue Smith, the spiritualist New Age author whom Mrs. Wimbush's patronizes. Barbecue-Smith claims to be able to produce an amazing amount of his wisdom on paper in a very short time, merely by finding his "inspiration." He claims he is able to find his inspiration to produce profound writing by hypnotizing himself by staring into a electric desk light. While he is thus entranced, his mind produces really profound stuff and he writes it down. Another amusing episode is the phamphlet produced by Mr. Bodiham, the village pastor, during WWI which tried to prove using biblical text that that war presaged Armegeddon. It was a war of righteousness between Protestant nations and Germany which was under the sinister influence of Catholicism according to Mr. Bodiham. Long after the war's end, Mr. Bodiham still is seeing portents that the second coming is at hand. The novel suprisingly has a pretty serious side which comes to the fore in the second part of the novel. The author shows great skill in portraying the humanity and emotions of Denis and Mary as they confront their own emotional immaturities.The author uses some big words but his narration is very simple, intelligent and charming.. The rest of the characters have less depth to them but they

Essential e-book for your e-library

Published by Thriftbooks.com User , 19 years ago
The fact that this book is a superb read has already been established. Most notably the author and critic, Cyril CONNOLLY, rated this book as one of the 100 key books of the MODERN MOVEMENT.Crome Yellow is perfectly suited to the e-book format. Great for reading on short trips, lunch breaks; in fact anytime you can grab a few minutes while on the go. The chapters are short and each stands alone as a complete and well-constructed scene. Within the first few screens, you'll be captured by the story and wanting more - especially the bizarre instalments on the "History of Crome." Enough said - you'll have to find out for yourself.This is an essential e-book for any well-stocked PDA e-library.

Published by Thriftbooks.com User , 20 years ago
Crome Yellow was Aldous Huxley's first book. His best books are his early books that he wrote before Brave New World. The young Aldous Huxley was evanescent, fluid, and limitless in his potential. However, as he grew older, especially in his last decades when he lived in California, he became more calcified, his vision narrowed and he became mired by his own mystic obscurisms. And when Huxley 'got' Buddhism, he stopped writing novels and wrote Buddhis tracts, so to speak. Written when he was 27, Crome Yellow centers around a house called Crome hence the title, (like Wuthering Heights centered around a house - Abbey Grange). The house was a gathering place of artists who were vacuous, though in a brilliantly significant way. The main character is Denis Stone, a naive neophyte, much like Huxley must have been at the time. Consequently as Huxley himself grew more sophisticated, so did his characters. Huxley attacks the ennui and malaise existential of life with a kind of righteous indignation that is refreshing. And he uproariously endorses the sentiments of misanthropy that all refined and culture cynics must feel. Huxley spent most of his life playing the expatriate game. In his own words from Crome, Huxley was "one of those distinguished people, who for some reason or other, find it impossible to live in England." Huxley spent most of the 1920's in Italy. It is difficult to believe that Aldous Huxley was just 27 when he wrote this book, for it is written like a 50 yr. old. Crome Yellow is a great introduction to Huxley, as well as a great way to know him better. There could scarcely be a more potent, intense vanguard for the psychedelic revolution, for which Huxley must have been a precursor of.

Published by Thriftbooks.com User , 22 years ago
Crome Yellow, a wonderful addition to my collection, found in an old bookstore for one dollar. Huxley's analysis of the characters in this book will, for the most part find you laughing with every turn of the page. With the most delightful setting you can't help but find yourself drawn into the world at crome yellow, especially the mind of the hapless denis and the seemingly stoic anne wimbush. Told with great vison and wit in true huxley style. You will be left wanting so much more.
Copyright © 2020 Thriftbooks.com Terms of Use | Privacy Policy | Do Not Sell My Personal Information | Accessibility Statement
ThriftBooks® and the ThriftBooks® logo are registered trademarks of Thrift Books Global, LLC