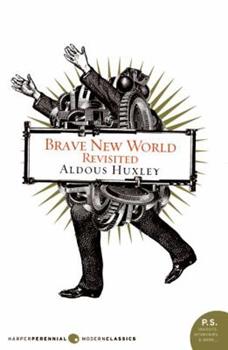 "Huxley uses his erudite knowledge of human relations to compare our actual world with his prophetic fantasy of 1931. It is a frightening experience, indeed, to discover how much of his satirical prediction of a distant future became reality in so short a time." -- New York Times Book Review When the novel Brave New World first appeared in 1932, its shocking analysis of a scientific dictatorship seemed a projection into the remote future. Here, in...

An interesting collection of essays

Published by Thriftbooks.com User , 18 years ago
This work by Aldous Huxley is one of the best nonfiction books I have read. I couldn't help but realize this man's genius as I read this book. His understanding of science is evident and only surpassed by his knowledge of the psychological. I recognized some of what I read, and believe that "Brave New World Revisited" must be the original source. Additionally, the book contains much information I had never heard before.The book is a collection of twelve essays written on how to prevent the world from "Brave New World" from coming into existence. Already in 1958, Huxley paints a bleak picture for our future. One of the main problems Huxley forsees is the lack of desire for freedom. In 1958, a study showed that American youths were indifferent to rule by a few experts instead of a democracy. He sees a need to increase critical thinking in the individuals of a society. He also explains the current methods of involuntary mental manipulation. The "Brave New World Revisited" is an informative collection of essays that has risen my awareness of psychological dangers.

Be Afraid, Be Very Afraid

Published by Thriftbooks.com User , 20 years ago
That is the message which Huxley conveys through this follow-up to his masterpiece, Brave New World. Huxley's obsevations of modern day mind control methods, brainwashing, and propaganda are chilling. What is even more chilling is that this book was written in 1958, one can imagine what advances in these dark sciences man has taken since then. A key point in this book is that if a totalitarian state is going to exist in the present day it will almost surely be more like Huxley's Brave New World, rather than Orwell's 1984. The main reason for this is that whereas Orwell's society revolves around the threat of violence, torture, and death, Huxley's revolves around the reward system. Huxley's Brave New World lulls the masses to sleep so that they have no idea that their freedom is being taken away. Huxley predicts that we will drug people who are even slightly out of the norm for "mental illnesses" (does Prozac ring a bell?). He predicts that valuable information, information necessary for the preservation of freedom, will be subtly, very subtly, taken away from the masses while replacing it with a seemingly terrific reward (does television ring a bell?). Huxley's most frightening premise in this book is that the individual (what he and others identify as "The Great Man") is being done away with by modern "science". He recapitulates for us the great debate between the behaviorist psychologists (like Watson and Skinner) and the philosopher psychologist William James. Skinner and company believe that the individual is powerless over his environmental influences while James strongly believes in the idea of "The Great Man". (In other words did Elizabethan England create Shakespeare's plays or did Shakespeare create his plays?) Huxley tells us the bad news in bulk before getting to the obvious question What can we do? His answer can be summarized in one word, THINK!!! Think, debate, don't accept the packaged and marketed ideas that are given to you like a McDonalds cheeseburger. In Huxley's words, educated yourself for freedom. And you can start by reading a copy of this book. If your local bookstore doesn't have one, then for God's sake, for all of our sakes, find a copy quick.

Published by Thriftbooks.com User , 20 years ago
Brave New World Revisited was a very good book. It is terrifying to have Huxley methodically tell of how to virtually inslave mankind. The way Huxley says lines like "a smart dictator will..." it kind of reminds me of "The Prince." And it is kind of like the Prince, only he's not telling the dictator he's telling us. Unfortunately, since there aren't many reviews, not many people are listening on how to save their freedom. He writes the book so well and leaves no idea without thought. This book nicely explains over-population, over-orginazation, propaganda, sleep-teaching, drugs, and more. Throughout the book he uses his own knowledge, as well as nice passages by Freud,Hitler and others. Don't think this book is not relevent to America and only relevent to third world nations. Because the book explains how people in a government and society like the U.S.'s can also become brainwashed and enslaved. A good book that should be read by everyone who wants too think for themselves.

The most relevant negative utopia.

Published by Thriftbooks.com User , 21 years ago
An absolutely superb essay on the world and society in general--like 1984 and Brave New World but without all the story and metaphor--and straight to the point. Much more relevant to our current times than either of the aforementioned books, also.

The world is ripe to take Mr. Huxley more seriously

Published by Thriftbooks.com User , 22 years ago
Mr. Huxley started warning us in 1932, with his masterpiece, "Brave New World." In this essay-style analysis of his own book, written twenty-six years later, he takes it one big step further. Addressing everything from overpopulation to overorganization, his words ring more true with every passing year. Our society needs to lift its head from the computer screen for a few hours to read this critical work. Few, if any, have said so much in so little space. Mr. Huxley is one of the greatest thinkers of the twentieth century, and it is a criminal shame that his words are not more widely read. We should put down our endless self-help manuals and learn where our ills really begin. We need to understand how the roots serve the tree before we can improve upon the tree. Mr. Huxley is an expert gardener...
Copyright © 2020 Thriftbooks.com Terms of Use | Privacy Policy | Do Not Sell My Personal Information | Accessibility Statement
ThriftBooks® and the ThriftBooks® logo are registered trademarks of Thrift Books Global, LLC