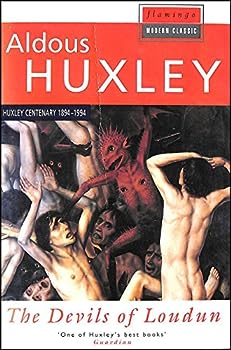 This description may be from another edition of this product. "HUXLEY'S MASTERPIECE AND PERHAPS THE MOST ENJOYABLE BOOK ABOUT SPIRITUALITY EVER WRITTEN. ." -- Washington Post Book World Aldous Huxley's "brilliant" ( Los Angeles Times ) and gripping account of...

So great the evil religion has aroused

Published by Thriftbooks.com User , 16 years ago
Aldous Huxley recreates in a masterful evocation the historical events in Loudun: 'hysterical' nuns accuse the secular priest Urbain Grandier of being a sorcerer. He is condemned and burnt at the stake. The author depicts masterly 'the superstition, fanaticism and professional self-interest of the ecclesiastics in the affair. 'Their goal was 'to justify the future use of inquisitional methods in every case where hysterical nuns could be induced by their confessors to accuse the enemies of the regime.' The hysterism was faked. Physisians found no evidence of possession by devils, only sometimes 'furor uterinus'. The grueling but deeply moving execution of the priest as well as the crowd delirium during and after it with fighting for relics, is a brutal but formidable evocation worth the magical paintings of a Hieronymus Bosch. Huxley gives also a deadly blow to the nostalgics and sentimentalists of medieval village life. That life 'was an enormous horror ... a society that periodically lynches its witches proclaims its faith in magic and fear for the devil.' He draws also a perfect comparison between the methods of Richelieu's totalitarian dictatorship and more modern political regimes and show trials for 'all the evils of religion can flourish without any belief in the supernatural; convinced materialists are ready to worship their own Absolute, and self-styled humanists will present their adversaries with all the zeal of the Inquisition.' His ironic style becomes sometimes very cynical: 'For the totalitarians of our more enlightened century there is no soul and no Creator; there is merely a lump of physiological raw material moulded by conditional reflexes and social pressures into what is still called a human being. This product exists for Society and must conform to the Collective Will which is merely by the dictator's will to power.' This is a formidable historical and very topical recreation of a most exemplary medieval trial. I also recommand highly Ken Russell's movie 'The Devils', as well as the works of Jean Delumeau on the Middle Ages and William Manchester's masterly 'A World only lit by Fire'.

Published by Thriftbooks.com User , 17 years ago
Huxley is best known for his prophetic work, Brave New World. He was a polymath who many contemporaries regarded as a walking encyclopedia. In addition to his intellectual talents and broad interests, he was a profoundly spiritual person interested in all aspects of human transcendence. Some of his most intriguing works, for instance, dealt with the use of psychoactive chemicals and the mystical experience. The present work, though, is far removed from chemicals, science, and reason; it is a profound investigation of religious madness in the early 17th century. Demonic possession has been a tantalizing topic ever since William Friedkin made his frightening movie, The Exorcist (1973), based on William Peter Blatty's popular novel (1970) of the same name. Blatty had initially received inspiration for the tale during his sophomore year at Georgetown when he read a brief newspaper article about a Washington, D.C. area boy who underwent exorcism at the hands of a group of Catholic priests. He stashed the article away and many years later set to work to create this horror masterpiece. In sculpting The Exorcist Blatty must have read Huxley's The Devils of Loudun (1952) for a number of telltale traits can be found in both accounts. The Devils of Loudun is the most carefully researched book about the most fully documented case of demonic possession. The first part of the book immerses you in the times and personalities of 17th century France: here is Descartes, here the Sun King, here his eminence, Cardinal Richielieu. In this part, Huxley also presents a nice biography of Urban Grandier, a priest who plays a large role in the rest of the book. While Huxley's writing is at times abstruse he does a fine job of conveying the vast cultural differences between the modern and premodern sensibilities. This alone is worth the read because you come to appreciate a very different view of the world and, in this case, a view that was the ancestor of our own worldview. Of course the more entertaining and gruesome aspects of the book begin after this thorough immersion. It becomes clear, though, that one needed that historical and biographical preface in order to truly grasp the phenomenon at Loudun. The `phenomenon' of Loudon is that a small convent of Ursuline nuns all became raving demoniacs. Multiple exorcists are called in to rid these demons and the reader gets a good review of the sort of demonic chicanery that any fan of The Exorcist is sure to appreciate. It becomes clear, as one reads the account, that Blatty got a lot of his best material from this book. You have all the blaspheming, lewdness, and sexual proffering that Linda Blair so spooked us with and even a good share of the unnatural acrobatics that causes one's hair to stand on end. Huxley does a superb job of entertaining us with this account and we shouldn't feel particularly guilty for so being entertained since all involved in the original case milked the possession for i

HELL ON EARTH: THE MARTYRDOM OF A POLITICAL SINNER

Published by Thriftbooks.com User , 18 years ago
This is a very well researched historical account of hell in this world, by the author of the better known opus Brave New World and The Doors of Perception of Heaven and Hell. The historical situation of the Catholic Church and the Jesuits, the politics in France during the 17th Century, the downfall of the Huguenots, all constitute the fabric were the personal drama and martyrdom of father Urbain Grandier are sewn.POLITICAL BACKGROUND: Cardinal Richelieu is directing the policy of France, during the reign of Louis XIII. After Richelieu convinces the King that self-government of small provincial towns must end, the feudal nobility lose their independence by an edict calling for the destruction of their castles and walls, whilst the Hughenots are being crushed by force. One of these towns is Loudun, where the priest (a Jesuit) is Urbain Grandier, an intellectual priest of 35, that knows the meaning and consequences of the edict calling for the destruction of the fortified walls of Loudun. Consequently, when Laubardemont, an agent of the Cardinal Richelieu arrives in the town, he is confronted and stopped by Grandier.GRANDIER'S VICES: Father Grandier is strikingly handsome and a sensualist. His vows of celibacy have not prevented him from fathering a bastard child with the daughter of Trincant, the town magistrate, and performing an illegal marriage with Madeleine, a young lady with whom he has fallen in love.THE ANGELICAL DEVIL: The Convent of the Ursulines in Loudun is ruled by Sister Jeanne of the Angels, a young humped back noun, with a beautiful face. She develops an obsession with Grandier and has sensual visions which involve the young priest. When she hears about the illicit marriage, she gets mad and falsely accuses the priest of sorcery and lewdness.THE CONSPIRACY: Grandier's enemies (Laubardemont, Trincant, Father Mignon and others) grasp the false accusation as the means with which the destruction of the priest can be achieved. They accuse Grandier of sorcery and sent for an exorcist, Father Barre, who starts performing a series of exorcisms never seen before in France. The methods used by him and his assistants to extract the devils reputedly within the bodies of the nuns are base and sadistic. From Sister Jeanne's altered mind come the screams and the behavior that affect the other nuns. From there, collective hysteria spreads and as the nouns bask in their notoriety, their fantasies become more and more unreal. Those who oppose this infernal circus, on the grounds that the exorcists are the ones depraved, deliberately provoking the nouns, are arrested by Laubardemont, who wants to see the matter through. Both Richelieu and his agent are well aware of Grandier's innocence but the raison d' Etat calls for the destruction of the young priest.THE TRIAL AND MARTYRDOM: Not surprisingly, based on the hysterical accusations of the nouns, Grandier and Madeleine are arrested. Grandier is brought to trial and found guilty of sorcery. He

A Lesser-Known, but Important Addition to the Huxley Cannon

Published by Thriftbooks.com User , 21 years ago
This book received some attention when Ken Russel's movie came out in the early 70's. Before and since it's been pretty much neglected, which is a shame. In my estimation, Huxley is one of the foremost masters of prose writing in the English language. Those who are unfamiliar with his essays should seek them out. His was a mind that ranged far and probed deeply. The incidents portrayed in this book are indeed bizarre. It will remind some of Arthur Miller's The Crucible, in that a group of young women, in this case nuns, fall victim to mass hysteria. A local priest, Father Grandet, becomes the fall-guy and the true victim of a superstition-riddled Inquisition. I'm sorry to see that this book is currently unavailable. It's really one of the most interesting historical accounts that I've ever read. Actually, Whiting's play, based on the same incident, is also excellent. I have mixed feelings about Russell's film. I thought Vanessa Redgrave was remarkable and Oliver Reed was very good, but Russell went too often over the top as is his wont.If you can't find this book online, perhaps you will come across it in a used-bookstore or, if you are luckier than I am and have a well-stocked library, you can find it there. You shouldn't pass up the opportunity if you want to have a satisfying and unusual reading experience.

Hard to find book, but well worth the wait.

Published by Thriftbooks.com User , 21 years ago
My first experience w/this story was the movie, The Devils, w/Vanessa Redgrave and Olvier Reed (directed by Ken Russell, need I say more?) which is a bit of a warped account of the book which is vastly superior. I also found a play by Whiting based on the book and an opera by Penderecki! What prompted so much interest and imitation? An outstand and very spiritual book. I actually enjoyed the narration and the way it would "interrupt" the voice of the book. It was somewhat similar to Camus' The Plague. It was in these passages of narration that Huxley really shows the profound message this book has to offer. To find that message, you must find a copy, it's worth it!
Copyright © 2020 Thriftbooks.com Terms of Use | Privacy Policy | Do Not Sell My Personal Information | Accessibility Statement
ThriftBooks® and the ThriftBooks® logo are registered trademarks of Thrift Books Global, LLC