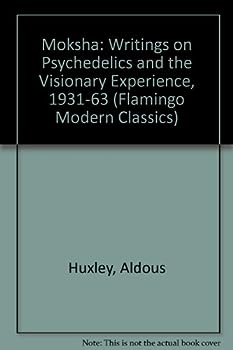 This description may be from another edition of this product. Selected writings from the author of Brave New World and The Doors of Perception on the role of psychedelics in society. - Includes letters and lectures by Huxley never published elsewhere. In May...

Published by Thriftbooks.com User , 15 years ago
New Age, Self Help, Cults. While you might think that some of these things are 'new'. you can find through this book that the human condition appears to have established itself quite a long time ago and has not changed a great deal in aggregate over time. It is really unfortunate that so little is understood about the workings of the human mind and that so little of our collective time is spent in pursuit of a deeper cognition. Well worth the investment in both time and money for anyone interested in knowing more about themselves.

This book has truly opened up my mind

Published by Thriftbooks.com User , 17 years ago
Alduos Huxley is a brilliant man. This book has made me think about things in a whole new way. I love the letters he writes. The book is divided into 40 chapters. I read it slowly, a chapter or two at a time over a period of a few months. It wasn't one of those books you, like his novels, that you'd want to read in a week or a day. It is something you want to read and then think about it for a while. His ideas on psychedelics are very enlightening. I am thankful for this work.

Published by Thriftbooks.com User , 18 years ago
Aldous Huxley was clearly a man ahead of his time: imagine an English intellectual in the 1940's writing about mecaline and LSD, how they relate to psychology, sociology and religion in modern times. This was not a cult leader or an Edgar Cayce/Aleister Crowley sort of philosopher: his essays were published in periodicals as varied as the Saturday Evening Post and Playboy Magazine (!). He was one of the ultimate explorers of the mind. Many of his thoughts from the 40's and the 50's still sound as relevant today as the day they were written. His timeless thoughts are his genius. I recommend this book highly.

AN INFORMATIVE AND POIGNANT READ

Published by Thriftbooks.com User , 18 years ago
This volume brings together selections from Huxley's Brave New World, Doors Of Perception, Heaven And Hell and Island, as well as magazine articles, letters, lectures and scientific papers. It also includes writings by Timothy Leary, Laura Huxley and Dr. Humphry Osmond. Leary's interesting account of a 1960 meeting with Huxley at Cambridge is titled Mushrooms For Lunch, whilst the same year's Harvard Sessions is a report of a psylocybin session where Huxley took part in a group experiment. Other very thought provoking chapters include Dr. Humphry Osmond's May Morning In Hollywood and Huxley's own Disregarded In The Darkness, Doors, Mescalin, Heaven And Hell and Brave New World Revisited. But the highlights of the book are Laura Huxley's 1962 account of her husband in a psychedelic state and especially her moving account of his illness and death, titled Nobly Born. The appendix is titled Instruments For Use During A Psychedelic Experience and the book concludes with an index. This is a brilliant collection of this refined author's best work and an insightful investigation into the use of entheogenic substances for the expansion of consciousness. I also recommend Huston Smith's Cleansing The Doors Of Perception: The Religious Significance of Entheogentic Plants and Chemicals, William James' Varieties Of Religious Experience the title Chaos, Creativity and Cosmic Consciousness by Ralph Abraham, Terence McKenna and Rupert Sheldrake.

Published by Thriftbooks.com User , 21 years ago
Entheogens (psychedelics) through the eyes of an articulate and cultured man of letters. We get to see through this series of essays why Huxley turned to psychedelics as a tool for spiritual exploration. It also raises important questions that need to be addressed by those of us using entheogens (psychedelics) as a means of expanding consciousness.Thomas Seay
Copyright © 2020 Thriftbooks.com Terms of Use | Privacy Policy | Do Not Sell My Personal Information | Accessibility Statement
ThriftBooks® and the ThriftBooks® logo are registered trademarks of Thrift Books Global, LLC