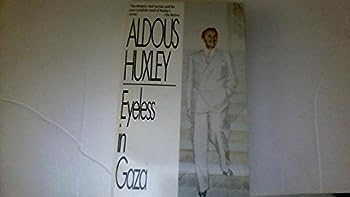 Aldous Huxley- a major figure of the literary and intellectual history of this century- dramatizes here one man's disillusionment threatening to plunge the world into a new morass.

Published by Thriftbooks.com User , 11 years ago
There is something tragic about a giant of 20th century English letters being known almost exclusively for one novel, and sadly, not his best. Cheers to Harper Classics for reissuing Huxley's masterpiece, //Eyeless in Gaza//. This is a rich, philosophical novel; by its non-chronological structure and shifting unreliable narration, it prefigures much of the later post-modern movement. The protagonist, Anthony Bemis, is a libertine intellectual, trapped in those "lost years" between the world wars. Surrounded by Oxford chums, Bemis watches as together and separately they search helplessly for meaning. Initially, he tries carnality with Helen, one of the most complex women of 20th century English literature and the wife of his friend. When this fails to satisfy, Bemis turns to radical politics, embracing violence that nearly leads to his death. For those interested in the interwar period and the philosophical currents which swept over Europe, //Eyeless in Gaza// is a must-read. Huxley muses on a wide range of topics: Shakespeare, politics, psychoanalysis, socialism, gender roles. Yet in the end, it is the characters he paints, helpless against their unrealized urges, that will hold readers' attention as they follow Anthony Bemis through tumult, war, and heartbreak. Reviewed by Jordan Magill

A Life of Meaning over Nonsense

Published by Thriftbooks.com User , 17 years ago
Fascinating novel. Although I've only read two other Aldous Huxley novels to date ("Brave New World" with "Revisted", & "Island"), I have to say that "Eyeless in Gaza" has piqued my burgeoning interest in Huxley's other works. In many ways, it's a strange and difficult novel. It is composed of 54 disordered chapters dealing with various aspects of Anthony Beavis' life between his youth in the early 1900's through his mid-forties in the 1930's. The novel begins in medias res, and each chapter is a potential entry point providing glimpses of Anthony's life at crucial moments in the present, past, and future (depending on where you start). Time is tweaked here in much the same way as in Faulkner's, "The Sound and the Fury" where the storyline is divided amongst four people's parallel lives. Huxley's boundless structure allows Anthony Beavis' life to rise and fall on the waves of a mystical ocean of time with its contrapuntal rhythms. One drawback to "Eyeless", and perhaps Huxley in general, is that his writing style is somewhat dry and cerebral. His characters, like D.H. Lawrence's (a friend of his), often come across as representations of ideals, or "symbols" rather than full-fledged, multi-dimensional characters, and the exterior scenery sometimes suffers. One notable exception is Helen Amberley, who is one of the more complex, and interesting characters in the novel. As for the scenery, the most vivid scenes are not the physical atmosphere, but each character's experience of an event. Examples include both Anthony and John Beavis' individual responses to Mrs. Amberley's death; Anthony and Brian playing with a toy boat on the school dormitory rooftop; or Helen flicking away a butterfly at Anthony's villa. Huxley's descriptive style and focus is simply more erudite than it is sentimental or emotional. Admittedly, there's a fine balance in such a highly condensed intellectual novel as this, and for the most part, I think Huxley manages to pull it off without being didactic or cold (readers who don't make it past the first 3-5 chapters probably won't go for it though). Details aside, once you grow accustomed to Huxley's style and structure, Anthony Beavis' story is rewarding. After the death of his mother in 1902, his life is shattered. He avoids World War I due to a training accident/injury, and feels lucky. The central aspect of the novel is Anthony's increasing diffidence towards life. His meeting with Mary Amberley in 1912 (ala Mrs. Robinson/"The Graduate") really throws a monkey wrench into his life, and adds fuel to the general lovelessness and cynicism displayed in the summer 1933 chapters. It is she who convinces Anthony to tragically betray his best friend, Brian Foxe in 1914. Eventually, in the fall of 1933, his Marxist leaning friend Mark Staithes convinces him to "break free" of his negativity and attend a revolution with him in Mexico. There, Anthony has a chance encounter with an eccentric traveller named Mille

Published by Thriftbooks.com User , 21 years ago
True, its didacticism inevitably keeps it from being considered a purely novelistic masterpiece. And some transitions-- like Anthony's committment to helping Mark in the revolution-- are awkward. But amongst the non-canonical novels of the 20th Century, "Eyeless in Gaza" is one of the very finest. Huxley's bold manipulation of chronology-- the backwards-and-forwards movement through the early decades of the century-- gives the book a symphonic undertow; it seems all at once breathless and grandiose. Huxley's psychological acumen has never been sharper: Helen is one of his most persuasive and complex female characters, and Anthony's spiritual journey is convincingly elaborate. Not only does "Eyeless in Gaza" have Huxley's trademark highbrow comedy, but a genuine sense of pathos (rarely does Huxley indulge so much sincere emotion in his characters). And the author's eye is particularly cinematic here: the dog dropped from the aeroplane is one of his most surreally brilliant images. This novel is one of the most compelling attempts to give comprehensive expression to the spiritual condition of European humanity between the Wars, and easily deserves to hit a few reading lists and syllabi.

Answered several questions that his other writing had raised

Published by Thriftbooks.com User , 21 years ago
I read this after Brave New World, his subsequent set of essays (Brave New World Revisited), and Island. I found the latter disappointing, partly due to my (mistaken) expectation that it would contain Huxley's "answer": it outlined his utopia in almost excessive detail, only to conclude that it was indeed impossible. Whilst the last of his set of essays contained a prescriptive outline, only when I'd read Eyeless in Gaza did I feel that I'd begun to understand his message properly. These four books are clearly not intended to amuse and entertain. However to anyone that wishes to understand how Huxley thought about these problems, I would recommend reading all four sequentially. The whole was, for me, more than the sum of the parts.

A great novel for a change...

Published by Thriftbooks.com User , 23 years ago
This novel is astounding. The characters are so perfectly crafted that you are easily led into living the life of the protagonist, Anthony Beavis, and thus you can change even as he changes. It is a transformational experience. It represents the bridge between Huxley's social satire and his profound works on the experience of living. One of the most worthwhile bundles of printed paper in existence.
Copyright © 2020 Thriftbooks.com Terms of Use | Privacy Policy | Do Not Sell My Personal Information | Accessibility Statement
ThriftBooks® and the ThriftBooks® logo are registered trademarks of Thrift Books Global, LLC