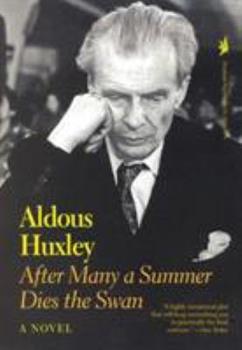 After Many a Summer Dies the Swan

A Hollywood millionaire with a terror of death, whose personal physician happens to be working on a theory of longevity-these are the elements of Aldous Huxley's caustic and entertaining satire on man's desire to live indefinitely. With his customary wit and intellectual sophistication, Huxley pursues his characters in their quest for the eternal, finishing on a note of horror. "This is Mr. Huxley's Hollywood novel, and you might expect it to be fantastic,...

Published by Thriftbooks.com User , 15 years ago
A lot of the reviews here make valid points: the philosophical asides are brilliant but tedious for people who don't like philosophy. The characters (the entire plot in fact) do sometimes seem like an afterthought, employed to support the 'big' ideas, but that's not to say they're two-dimensional. However, when reading a book like this it's important not to get too focused on only one of the many interesting ideas that fly like sparks from Huxley's mind. Explorations of mortality, eroticism, class struggle, mysticism, greed, ...etc. are all presented dispassionately enough. As such, they're like colors on Huxley's palette; and it's not rewarding to complain about a particular shade of green. The thing that struck me was that Huxley is very specific about the character types he chooses to include here. His decision to pit the grasping Stoyte against the impossibly saint-like Propter elaborates an inner-dialogue one can imagine Huxley was having to reconcile his own idealized world-view with the reality he had encountered in America. In doing this Huxley provides justification and outlines a strategy for implementing his utopian vision. For me; it's this attempt to reconcile the world of ideas with reality that, like with much of Hesse's work, seems to be the focal point of the book. I'm looking forward to reading Huxley's later books to see how he develops this attempted reconciliation.

A lesser-known Huxley work that is well worth reading

Published by Thriftbooks.com User , 20 years ago
Most people read Huxley's Brave New World (under duress, maybe, in school) and possibly Chrome Yellow and Eyeless in Gaza, his two other popular novels. However, After Many a Summer is a wonderful, not-very-long novel that displays Huxley's superb sarcastic wit. In this novel, Huxley plays on man's fear of death. He creates a somewhat W. R. Hearst-like rich businessman who wants to use his money and power to cheat Death, and a scientist who has no compunctions against using any means to lengthen life, without questioning what quality that extended life really has. The ending is a real surprise. This is one of Huxley's most enjoyable novels to read. It is also a timely one that can be read in the light of the new genetic research pusing the boundaries of science. As in Brave New World, Huxley was frighteningly accurate in his prophesies.

After Many a Summer Dies the Swan

Published by Thriftbooks.com User , 21 years ago
I'll let you read the other reviews for the details. I wish only to add that I read this book more than forty years ago and its images are still bright and clear in my mind to this day. True, it may not qualify as "a literary masterpiece" in academic circles, but surely the clarity of those images in my mind after all these years qualifies it for some kind of prize! I was delighted to find it back in print.Huxley may not have had a scientist's clear understanding of Darwin's Theory of Evolution. Indeed the artistic license he took with that theory may well have given many fighting the Creationism vs. Evolution battle some misinformation to fuel their firey debates, but his insights into human nature, his fascination with and revulsion for America and Americans rings as true and insightful today as it did in 1939.Read this book! It will tickle your funny bone and keep you thinking for decades to come.

Published by Thriftbooks.com User , 21 years ago
While not exactly a masterpiece, Huxley's "After Many a Summer . . ." is a brilliant literary high-wire act, combining all his usual predilections: Vedanta-inspired philosophical dialogues, poetic digressions, a smattering of ingenious erotica, and a great deal of vitriol to pour over the heads of the materialists, nihilists, and profiteers of the modern age. Among Huxley's most clever inventions in this work must be counted the apocryphal musings of a rakish Earl of the late Enlightenment, whose quest for immortality gives the novel occasion for its final, bleak estimate of human desire-- these exercises in the 18th Century aphorism are both a wonderful evocation of that sensual, godless era and a comic counterpoint to the heroic transcendentalism of the novel's great sage, Propter.

Published by Thriftbooks.com User , 22 years ago
Right along with "Brave New World", Aldous Huxley writes with great wit and care. His observations on society and wealth are insightful. I enjoy Huxley's style and topics. It was an eye-opening experience.
Copyright © 2020 Thriftbooks.com Terms of Use | Privacy Policy | Do Not Sell My Personal Information | Accessibility Statement
ThriftBooks® and the ThriftBooks® logo are registered trademarks of Thrift Books Global, LLC