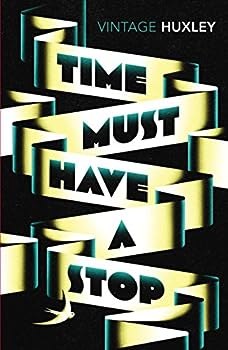 TIME MUST HAVE A STOP

This description may be from another edition of this product. Sebastian Barnack, a handsome English schoolboy, goes to Italy for the summer, and there his real education begins. His teachers are two quite different men: Bruno Rontini, the saintly bookseller, who...

The Spiritual Vision of a Great Genius

Published by Thriftbooks.com User , 12 years ago
One thing that critics and fans alike agree on is that all of Huxley's later work has as its focus the kind of mystical, moral, personal transformation that goes back to the ancient Greeks. Huxley was convinced that love and goodness are the answer to life, and that self-knowledge and moral commitment to love are the only things that make life meaningful and the only hope for humanity. Many modern critics, being postmodern nihilists, hate this line of thinking and have been known to express this in no uncertain terms. For those people who are convinced that love, goodness, and God (the transpersonal Eastern, Buddhist mystical God as opposed to the personal God of Western fundamentalists) are the answer to life's questions, Huxley's later works are an unequaled treasure. They are ten times as intelligent, subtle, and thought-provoking as the work of virtually any "New Age" author, and ten times as enjoyable as thouroughly realized works of art. The characters are drawn with Huxley's characteristic satirical sensibility. The vision of the afterlife is a very original and unique aspect of this particular work. There are a few flaws in this particular work in that the poetry is rather bad and the epilogue, though by far the most inspiring part of the book, does seem to be somewhat "pasted on" to the end of the book, instead of worked in seamlessly to the storyline. For those willing to allow themselves to be inspired by visions of goodness or saintliness, as people have been inspired by the accounts of Jesus, the Buddha, and many others throughout history, the best aspect of the novel by far is the depiction of Bruno Rotini. There may not be such a description in existence that was ever written with a better sense of aesthetic brilliance.

Published by Thriftbooks.com User , 14 years ago
At the centre of this book is a marvellous attempt to describe what happens to the 'soul' after a human dies. Huxleys ideas for the novel are based on the Bardo Thodol (better known in the West as The Tibetan Book of The Dead). While you follow the dead person through various bardo states Huxley stays very much rooted in what we perceive as the everyday world, his characters dialogues entertaining us with customary Huxley wisdom and wit on everything from politics to art and literature. Another wonderful voyage with one of the pioneer synthesizers of East and West.

Published by Thriftbooks.com User , 16 years ago
This book is not for everyone. If you like and understand satirical views of Victorian society and you have a knowledge or interest in art, poetry, and theology then you'll find this book intellectually stimulating. If you don't appreciate any of these things you might find it presumptuous and at the very least boring. So I admit this book is very much intoned to a specific audience. The book delves into discussions of just about everything under the sun. It goes through saintliness, theology, art, poetry, schooling, etiquette, and morals. The characters add further insight with their behaviors. I was particularly fond of Mrs. Thwale who perfectly embodies the female mystique and femme fatale. A lascivious woman of Victorian sensibilities and honor she flits from one man to the next, never giving herself up. The main character, probably the least well-rounded, seems to be a flawless embodiment of the stereotypical teenager who thinks he's the center of the universe. Certain points are just terribly cruel but absolutely hilarious in that twisted satirical way. At one point the elderly Queen Mother clutches her dead dog in mourning but almost as soon as a new puppy is handed over to her she lets the dog fall off her lap and flop to the ground. I believe there is a point to be made here. Though I admit I don't even remotely agree with the discussions of sainthood I did find it an interesting read. It proved Huxley is evermore a very complicated and perhaps conflicted character in and of himself. Though I give this book five stars I still think it bears repeating it's not for everyone.

Huxley is a genious.

Published by Thriftbooks.com User , 22 years ago
Huxley is the master of complex philosophical writing. This is not "Brave New World" at all. It is much more complex, and it's theme is different.

Published by Thriftbooks.com User , 23 years ago
Huxley explores the fickleness of mortality with his usual clever pen and knack for irony. This beautiful book examines materialism and morality through the eyes of a young man and contrasts this with the protagonist's reflections of years later.
Copyright © 2020 Thriftbooks.com Terms of Use | Privacy Policy | Do Not Sell My Personal Information | Accessibility Statement
ThriftBooks® and the ThriftBooks® logo are registered trademarks of Thrift Books Global, LLC