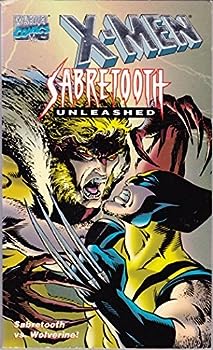 Captured and programmed by the mysterious Tribune to kill the mutant Mystique, Sabretooth is unaware that Mystique was once his girlfriend-in-disguise and that Tribune is their son and a vengeful... This description may be from another edition of this product.

Published by Thriftbooks.com User , 21 years ago
I like this book due to the fact that X-Men are one of my favorite shows/comics in the world. In this book, Sabretooth gets betrayed by his psychic friend (only later to be reunited), he gets kidnapped by his son who is known as the Tribunal, gets sent on a mission to kill a woman who we later find out is his old girlfriend, and takes on the X-Men themselves. Bad day for the big fellow ain't it? This is a great plot but the author uses phrases such as "Creed shot back" and "said Birdy" way too many times. It gets repetitive, and hinders the book. I still gotta give it to him for making such a complex book, with multiple plotlines. It must be hard to do this.
Copyright © 2022 Thriftbooks.com Terms of Use | Privacy Policy | Do Not Sell My Personal Information | Accessibility Statement
ThriftBooks® and the ThriftBooks® logo are registered trademarks of Thrift Books Global, LLC