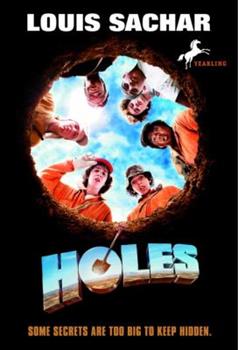 Stanley Yelnats is under a curse. A curse that began with his no-good-dirty-rotten-pig-stealing-great-great-grandfather and has since followed generations of Yelnats. Now Stanley has been unjustly sent to a boys' detention center, Camp Green Lake, where the warden makes the boys "build character" by spending all day, every day, digging holes: five feet wide and five feet deep. It doesn't take long for Stanley to realize there's more than character...

not "good" condition at all. Where is the rest of the cover?

Published by Erica , 6 months ago
Great book, but I ordered "good" condition and this is "fair" at best. 1/4 of the front cover is missing. It looks like it has mild water damage and most of the pages have dog eared corners. At least it is readable, but this is the state that I retire books from my classroom not put them in. Very disappointed in this purchase.

NOT IN "GOOD CONDITION" as stated.

Published by Jody S , 10 months ago
What I received was more like "ACCEPTABLE". It was pretty tattered and worn. Will make due as a craft project book, I guess.

Published by Thriftbooks.com User , 3 years ago
When I saw this book available for purchase, I decided to buy it for our 12 yo son. He loves the movie and has watched it more times than I probably even realize. I know books and movies usually differ but I check in on him and his opinion of the book and he says it's just the same as the movie so far. He is not a reader by any means but I continue to try and get him to enjoy it. This book is helping in that fight. I recommend it highly. And so does he.

One of the Best of This Genre!

Published by Thriftbooks.com User , 17 years ago
As a member of several book groups from time to time members recommend reads from the world of children's literature and young adult titles. In the past few years I have read and loved The Giver by Lois Lowry, Bridge to Terabithia by Katherine Paterson, Tuck Everlasting by Natalie Babbitt and The Princess Diaries by Meg Cabot. When I learned that a movie based on Holes bu Louis Sachar, starring Sigourney Weaver, Jon Voight and Henry Winkler was in the production stage, I decided to read this well loved book first. And once again reading this book confirmed for me that a really great read can be found in a genre we may feel is for a younger audience.While on the surface Holes tells a rather simple story of how an ancient curse affects a present day tale, this book touches on more profound themes which will keep any reader turning the pages quickly. Chief among the themes is loyalty, independence, siolation, segregation, evil vs. good and above all else, love. Told with humor and compassion, this book takes its rightful place among other wonderful titles and in my opinion is destined to become a classic in years to come.Stanley Yelnats is a young man sent to the Green Lake Detention Camp for Boys after he is accused of stealing a pair of snearker from a famous basketball player at an auction. Stanley's mother urges Stanley to look upon this event as an opportunity to have fun since he's never been to a camp. But as Stanley will soon learn, Green Lake Camp is neither green land, a lake nor an ordinary camp. It is instead a camp where a group of young boys are at a facility overseen by The Warden, a woman, and Mr. Sir. All that Stanley and the others are told they must do is dig holes of a specified size under a broiling sun and report on what they find as they dig. What is never explained to them, though, is why they are digging these holes and what they are supposed to find. We as readers, though, learn about a curse from long ago, what the boys are really looking for and a woman bandit and the man she loved and lost. But most of all we learn how Stanley's family heritage in a tale from long ago and how it brought him to Green Lake.Considered a book for young adults, the author Louis Sachar presents two paralell stories which had me gulping down the pages. Not only do I recommend this book to younger teenage readers but also to adults who enjoy a bit of humor and poignancy. This is a one of a kind book and I look forward to rereading it again and again.

A Story that has it All

Published by Thriftbooks.com User , 21 years ago
Stanley Yelnats and his family have never had anything but bad luck, so it's not really a surprise to him when he is falsely accused and convicted of theft. Given the choice of jail or Camp Green Lake, Stanley chooses Green Lake because he's never been to camp before. Unfortunately, Camp Green Lake doesn't have a lake and it isn't really a camp. It's a juvenile detention facility. And to build character, the warden, who paints her fingernails with snake venom, has each "camper" dig a hole five feet deep by five feet wide by five feet long every day, even Saturdays and Sundays. What Stanley and the rest of the boys don't know is that the warden isn't just building character, she's looking for the lost buried treasure of outlaw, Kissing Kate Barlow. So begins Holes, a terrific, action filled story, full of great characters with strong voices, exciting, funny scenes and enough twists and turns to keep your kids reading non-stop to the end of the book. Louis Sachar has written a masterpiece full of humor, insight, wisdom and the triumph of the human spirit and he deserves all the awards this book won. A must read for children aged 9 - 12 and a great addition to all home libraries.

It's a tie for my favorite book of all time.

Published by Thriftbooks.com User , 21 years ago
I loved reading Holes. In class we have to do a book report almost every month. I'm really glad I chose the book Holes. Some of the things you read in the story you don't think is important, but at the end everything just ties together. Stanley Yelanst gets wrongly acused of stealing a pair of shoes. He has to go to a youth prison camp. Everyday you have to dig a hole 5 feet deep and five feet wide. Sachar does a wonderful job of writing. My mom read this book before I did and liked it just as much. I would recomend this book to anyone from the ages of 8- to adult. A great book for anyone. I have no trouble seeing why this book won the Newberry Medal of Honor. I love Holes.
Copyright © 2020 Thriftbooks.com Terms of Use | Privacy Policy | Do Not Sell My Personal Information | Accessibility Statement
ThriftBooks® and the ThriftBooks® logo are registered trademarks of Thrift Books Global, LLC