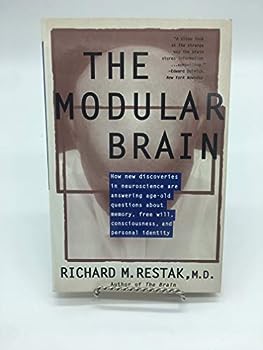 Predicts what research may reveal in the next ten years in the field of neuroscience and explains the current modular concept of the brain's organization.

Published by Thriftbooks.com User , 20 years ago
We know that nerves receive and relay nervous impulses, but "who" controls these cells so that this information is sent to the right places at the right times? Can it really be that our consciousness is built up of the complex interplay of neurons? These are problems about which philosophers have groped along for centuries, but which are now coming into the light with the advancing knowledge of neurologists.One such neurologist who has been prominent in communicating to the public about the human brain is Dr. Richard M. Restak, author of two previous books, The Brain and The mind, which accompanied the PBS series of the same name. His book on The Modular Brain is especially enlightening on how the human personality can be the product of neuron impulses. He cites many examples of brain disorders that demonstrate that there is no central point in the brain wherein our consciousness resides, and that our brains create all the aspects of our personalities by an imponderable division of labor.Neurologists have observed, for example, that awareness and consciousness are not the same and are not created from one brain area. The self-contradictory and strange beliefs encountered in patients suffering from "anosognosia" (denial of loss of capacity) are evidence for this. Dr. Restak explains that this kind of denial is altogether different from denials by patients who know something is wrong but try to pretend otherwise. Anosognosia usually occurs in patients with damage to the right hemisphere of the brain, is not accompanied by other symptoms of mental illness, does not occur with injuries to any other parts of the body, and causes "a breakdown in conscious awareness that cuts across different domains."It can involve not only left-sided paralysis and loss of leftsided awareness but also total blindness. It is hard to imagine how blindness could escape someone's awareness when they are otherwise fully conscious and rational. Nevertheless, Dr. Restak tells of a brain-damaged patient who lost not only her sight but also ability to know that she could not see. Out of frustration with his inability to convince her of her disability, he made the mistake of suggesting that she prove she could see by getting out of bed and walking. "At this," he says, "she promptly leaped from her bed and ran squarely into the nearest wall, breaking her nose in the effort." From cases like this and other evidence explained in his book, Dr. Restak suggests that, "in the presence of anosognosia, beliefs can become modular and exist independently and even in contradiction to one another."Other facets of our personalities are also investigated with a wealth of examples lucidly explained for the layman. This book brings together a wide range of evidence in support of the modular theory of brain function, a theory which leaves little or no room for metaphysical or spiritual theories of consciousness relating to the "mind-body" problem so familiar to philosophers.Moreover, I found the

A well-written, valid treatise on modularity.

Published by Thriftbooks.com User , 21 years ago
It is a shame that this book is out of print. It is an excellent book for those interested in or going into neuroscience to read. Over the past ten years which were named the Decade of the Brain, there have been significant arguments into whether the brain acts like a computer with parallel processing, or whether it performs its functions in separate modules which talk with other modules while doing so. Distributed processing and a combination of all of these ideas is also being discussed or argued depending on who is doing it at the Society for Neuroscience!The point is, while much has been learned about the brain, we still have a long way to go. Restak is aware of this, and is very good about giving credit to those in the past who made very educated guesses about what the brain and mind consist of. Restak is another of our good science writers and his area tends to stick with topics concerning the brain. I don't always agree with his arguments, but he presents them well and of course, I am always fascinated by the descriptions of the patients he has seen. I hope he continues to write for us, and that a publisher will put this book out in paperback for a new generation of up and coming neuroscientists and educators to read. It is just as important for educators to know about the brain as it is for doctors because they are the ones who help to wire or rewire the brain, and they can either do great good, or great harm depending upon their teaching methods and their attitudes towards others. Karen Sadler Science Education, University of Pittsburgh
Copyright © 2020 Thriftbooks.com Terms of Use | Privacy Policy | Do Not Sell My Personal Information | Accessibility Statement
ThriftBooks® and the ThriftBooks® logo are registered trademarks of Thrift Books Global, LLC