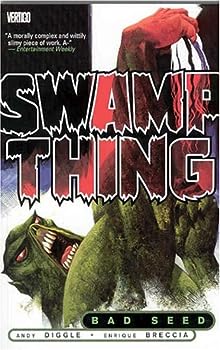 The force once known as the Swamp Thing threatens to rebalance the natural world at the cost of uncountable human casualties - including his own daughter Tefe, and his lost love Abby - unless the man who originally showed him his true nature can find a way to stop him.

Published by Thriftbooks.com User , 16 years ago
Andy Diggle, while his run was very short on the series, adequately re-acquainted readers with the big leafy superhero with some of the worst luck ever. It has been years since Alec Holland/Swamp Thing became Earth's elemental, with control over all aspects of nature. Having shed his human soul, he isn't so warm to mankind anymore. Enter his ex-wife, his teenage daughter, and a certain mage in a trenchcoat, and some real trouble is brewing. Diggle and Breccia make for a good team. Diggle obviously relishes in the past storylines of ST, while Breccia goes hog wild creating slimy, hideous creatures. New readers, however, will be a bit puzzled. I've read every volume of Swamp Thing available and I actually became lost at times. In the gap between Regenesis and Bad Seed, a LOT happened to the Holland family. I read up some online to get a good idea... but between Rick Veitch's run, a series of bad decisions following that, a concluding run on the original Vertigo title by Mark Millar, and a relaunch title primarily featuring Tefe (Alec and Abby's daughter), many people missed a lot. And Diggle does not do much to bring us up to speed. Aside from this, however, it is a treat for fans to see the title revamped, and Diggle's obvious enthusiasm is contagious. My advice: read the other volumes first, get up to speed online, then delve into the new series. It's really worth the effort.
Copyright © 2020 Thriftbooks.com Terms of Use | Privacy Policy | Do Not Sell My Personal Information | Accessibility Statement
ThriftBooks® and the ThriftBooks® logo are registered trademarks of Thrift Books Global, LLC