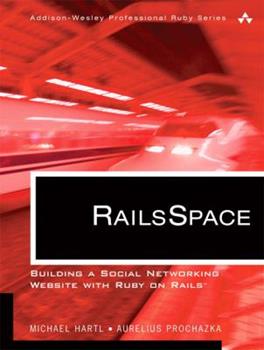 Railsspace: Building a Social Networking Website with Ruby on Rails

by Michael Hartl and Aurelius Prochazka

Ruby on Rails is fast displacing PHP, ASP, and J2EE as the development framework of choice for discriminating programmers, thanks to its elegant design and emphasis on practical results. "RailsSpace" teaches you to build large-scale projects with Rails by developing a real-world application: a social networking website like MySpace, Facebook, or Friendster. Inside, the authors walk you step by step from the creation of the site's virtually static...

Invaluable resource for hands-on learning of Ruby on Rails

Published by Thriftbooks.com User , 14 years ago
RailsSpace does an excellent job of teaching Ruby on Rails through a hands-on, real world application. If you are like me then you probably cringed at the thought of yet another social networking site. However, after reading through the first part to this book my apprehensions were put at ease. The authors explained in the opening chapter that "There's a tension in any educational book between the two extremes of pure tutorial and pure reference. We land firmly on the tutorial side of this spectrum--" The audience for the book is anyone beginning with Ruby on Rails. This book assumes no prior knowledge of Rails or Ruby, and sticks to that through the entire book. Each chapter walks you through the process of creating RailsSpace, while also teaching you best practices and some of the nuances of Ruby and the Rails framework. This book is broken into two main parts, Foundations and Building a Social Network, with each part comprising several chapters each. Foundations Getting Started With the introduction out of the way, it is time to jump into building the application. This chapter assists you in getting Ruby on Rails and its dependencies on your platform of choice, and then gives instruction for setting up your development environment. Once all of the pieces are in place they move to setting up your rails application, and how to get started with your first pages. They use rails generator to create the controllers and give you an idea of the default routing of a Rails application. The rest of the chapter spends some time building views and using embedded ruby to work with your templates. For the beginner to Ruby or Rails, this part is valuable for the rest of the application. They teach the basics of Ruby and introduce you to instance variables, hashes, and symbols. It isn't practical for them to cover everything, so they also give you direction on finding answers to questions that might arise. The first place to look is always the API. We have the basics down, we have created our application, generated some controllers, and put our navigation into place. Modeling users What good is a social networking site without any users? Here we are introduced to setting up our models in our application. This chapter touches on defining your schema through the use of migrations. You build the migration, run the migration, and then work within the model to create your validations. They spend some time with the validations and show you how to use the default helper methods or extend the validations to be more powerful and suit your needs. Now we have a place to store our users, lets move on to the process of letting them become part of the community. Registering users This chapter focuses on the process needed to allow a user to register to RailsSpace. We are introduced to some more Rails magic as we build the User controller and the views. We start first with the view of the registration form and learn how to use Rails helpers to generate our form fields an

Published by Thriftbooks.com User , 14 years ago
This is a wonderful book to start learning ruby on rails with. It takes you step by step and explains in details the various properties and logic behind obscure looking ruby code. The book teaches you how to use Ruby on Rails by showing what you need to do to construct a social networking website. So at the end of the book, you can actually have a fully functioning webpage. I definitely recommend this book to anyone who wants to learn Ruby on Rails.

Published by Thriftbooks.com User , 14 years ago
The thing I like most about this book is that its readable. You can learn and understand without having to be in front of your PC. I am not necessarily a nuby but I did found that because the authors cover the Rails ideas so well it helped me pick up on some of the finer points and nifty tricks that I have been missing while I learnt Rails. I am sure the authors will address any shortcomings mentioned by the other reveiwers with respect to choice of a pagination strategy etc.. They have already devoted a section on the website to possible improvements to the book's code. I also have the Alan Bradburne book and I recommend you get them both. They both have their strengths. Get RailsSpace to help you get a really solid foundation and core user interaction site and Rails Social Networking Sites to get you up and running quickly with everything else.

My favorite of the Ten Ruby and Rails Books on my desk.

Published by Thriftbooks.com User , 15 years ago
For this beginner/intermediate programmer struggling to become a Ruby and Rails expert, RailsSpace strikes a perfect chord. I have been working through the Safari version of the book until receiving my hard copy yesterday. I would highly recommend this as the first book on learning RoR after a pure Ruby book such as Programming Ruby: The Pragmatic Programmers' Guide, Second Edition"(known in the community as the Pick Axe) or Beginning Ruby: From Novice to Professional (Beginning from Novice to Professional)" two excellent books on Ruby which I found out the hard way is best learned before tackling Rails. One of the many things that make this book a pleasure to study is the code just works as is. For those of you who have suffered through many Rails books that in the rush to publish have you constantly referring back to 5, 6, or more of errata, it is such a nice surprise to enter code and it just works. I am currently running Ruby 1.8.6 and 1.2.3 the current versions and have had to refer to only one example of errata in the first half of the book.(p.24 gemserver should be gem_server). Kudos to the technical editor for a "getting it correct." The authors' programming style(s) are easy to read while following and teaching the Ruby/Rails community practices. The book uses output examples after each snippet of code so you can follow along not wondering if what you just did worked. The example app you produce while working through RailsSpace is not YASNS (Yet Another Social Networking Site) rather a (LBERBPS) Learn by Example Rails Best Practices Site. It was fun for me as I was tired of shopping cart, and book/music store examples. I don't know how to put it into to the right words, but this books code flows. I always enjoy the rare book that sets a standard of excellence, and that is what puts this book at the top of my Ruby on Rails Library.
Trustpilot
Copyright © 2022 Thriftbooks.com Terms of Use | Privacy Policy | Do Not Sell or Share My Personal Information | Accessibility Statement
ThriftBooks® and the ThriftBooks® logo are registered trademarks of Thrift Books Global, LLC