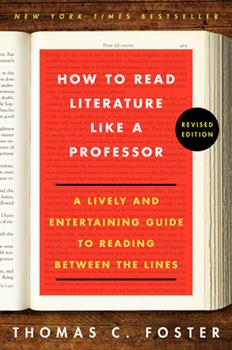 How to Read Literature Like a Professor Revised Edition: A Lively and Entertaining Guide to Reading Between the Lines

A thoroughly revised and updated edition of Thomas C. Foster's classic guide--a lively and entertaining introduction to literature and literary basics, including symbols, themes and contexts, that shows you how to make your everyday reading experience more rewarding and enjoyable.While many books can be enjoyed for their basic stories, there are often deeper literary meanings interwoven in these texts. How to Read Literature Like a Professor helps...

The Game and How to Read It

Published by Thriftbooks.com User , 16 years ago
There comes a time in every honest conversation about literature between students and professors when the students' willingness to accept the academic way of looking at things fails. Foster, having no doubt been on the receiving end of this skepticism, cites it: "A moment occurs in this exchange between professor and student when each of us adopts a look," Foster explains. "My look says, 'What, you don't get it?' Theirs says, 'We don't get it. And we think you're making it up.'" Fair enough. In fact, there's a legitimate question in the accusation. Are they making it up? There are two answers to the question. *Yes. Absolutely. Very few writers begin with symbols and go to stories. We actually dream our stories or allow them to pop into our heads while we're walking in the woods or the streets or pumping the elipto-cycle at the gym. The layers of symbol that Foster's talking about represent the creativity of readers, not the creativity of writers. We should, by the way, be grateful to them for making this stuff up. Reading in a professorial way requires a great deal of attention. It actually forces the reader to be aware, and awareness as you probably know is the basic stuff of life. Read like a professor and you will have a lot more fun with your reading. Guaranteed. *The second answer is 'No'. No, they're not making it up. Writers live in the world of symbols just like everybody else and when a writer chooses to post (let's say) a dog at the entrance to a dark lane, it's possible that that author is either connecting with or just unconsciously replicating the Classical image of Cerebus guarding the gates of Hell. Most people intuitively understand both these answers, but the trouble begins when we pay too much attention to writers' intentions. What does Murakami mean when Kafka's mentally feeble guide is able to talk to cats? Wrong question. We'll never know what he meant (even if he tried to tell us).What we can 'know' is what it means to us and what pieces of the universal gold mine of meaning it brings to the surface for our attention. Now it seems like this kind of attention to literature could be an interesting game to play-you get to participate in a book, not just read it. In actual fact, most of the writing on the topic is achingly, profoundly, set-the-house-on-fire-to- escape-it dull. Gigantic egos praying to our Lady of the Unwarranted Assumption and offering definitive answers where what is needed are artful suggestions. Foster's book is brilliant because he is appropriately humble in the face of his topic. He seems like a fellow who enjoys his reading, a helpful waiter who tells you which of tonight's specials would really go with your favorite wine. He has certainly made my reading more fun and I have no doubt that he will do the same for you. --Lynn Hoffman, author of THE NEW SHORT COURSE IN WINE and the forthcoming novel bang BANG from Kunati Books.ISBN 9781601640005

Published by Thriftbooks.com User , 16 years ago
This book is like a key that helps you unlock the mysteries contained in literary works. It's easy to read and full of insights and helps you dissect the many meanings in literature. My only criticism is that the book is too short. I hope Dr Foster is working on volume two.

Could be quite useful to an incoming Freshman in college

Published by Thriftbooks.com User , 16 years ago
A better subtitle to this book might be "Understanding Symbology," but then you would miss the "lively" and "entertaining" part of the current subtitle, and that shouldn't be thrown away. This is probably the best book I've ever read about the ugly task of decoding literature, and I would highly recommend it as a graduation present for any high school student who plans to attend college. It's that good. Foster is no dry academic, although his taste still runs to the rather mundane type of literature that doesn't do anything for me personally. What Foster is good about, though, is explaining exactly why he finds that type of literature exciting and how one can decipher it to understand what those darn professors find interesting about it, too. This is a nice companion piece to Jane Smiley's Thirteen Ways of Looking at the Novel, especially her chapter on how novelists play games when writing. Smiley comes to the novel as a practioner; Foster looks at the novel as a cartographer. Smiley explains how to play the game, while Foster shows how to understand what the game was that the novelist was playing. Do all novelists play games? No, only the better ones. It's not that novels that have nothing going for them beyond the plot are bad per se, but like a movie that goes from one chase sequence to showdown, a plot-only novel is one-dimensional. The only thing missing in Foster's explication here is an understanding for novels of ideas, which often get short shrift from the academy, sometimes rightly (when the novel has no plot or characters and only presents the ideas) but often overlooked because the novelist eschews symbology for prognostication. It's only a slight misstep, and one easily forgiven for most college classes where this book will come in handy won't be covering those kinds of books anyway.

friendly introduction to a deeper understanding of books

Published by Thriftbooks.com User , 19 years ago
The author is an English professor at the University of Michigan and it becomes apparent quite quickly that he is one of those popular professors who is chatty and has lots of students signing up for his introductory courses on literature. The language is friendly and the examples are entertaining as well as informative. If I lived in Flint, I'd take his classes.There have been many times I've read a book and just *known* the author is trying to impart more than I am taking away from the prose, and I hear about symbolism in literature, yet I have very little success finding it on my own. One time in high school I had a very good English teacher who would point out the symbolism in stories and novels, but he never told us how to do it, as this book does. With chapters on a wide range of topics (journeys, meals, poetry, Shakespeare, the Bible, mythology, fairy tales, weather, geography, violence, politics, sex and illness, among others) and a wide variety of examples, I found myself learning A LOT. Certainly this would not be of much value to a literature graduate student or professor, but for the rest of us this is a great introduction to getting more out of our reading (or viewing, as the author also touches on film, though to a lesser extent).The book concludes with a test, in which you read a short story and interpret it using the principles put forth by Professor Foster, then interpretations by several students and Foster himself -- delightful and illuminating! Finally, the author gives a suggested reading/viewing list and an index.Two problems with the book: first, as I mentioned, the style of the author is conversational, but sometimes to the point of being distracting; secondly, the topics covered are quite idiosyncratic, leaving out as many as are included, though the author addresses this. Still, I give the book 5 out of 5 because it was entertaining, accessible and it has improved my understanding and appreciation of subsequent books I've read and even films I've seen.

Published by Thriftbooks.com User , 19 years ago
For those of us who want to know how to take a book apart and make sense of it, this does the job. Foster obviously has much experience in dealing with students and puts that background to good use for the average reader who wants to know what D.H. Lawrence really meant in "Women in Love" with that terrific bunch of British actors. Bite-sized pieces, straightforward, buy it and use to enjoy fiction better.
Trustpilot
Copyright © 2022 Thriftbooks.com Terms of Use | Privacy Policy | Do Not Sell My Personal Information | Cookie Preferences | Accessibility Statement
ThriftBooks® and the ThriftBooks® logo are registered trademarks of Thrift Books Global, LLC