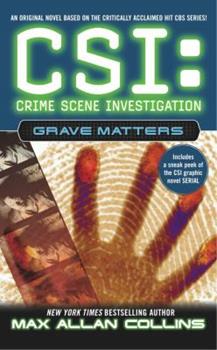 Rebecca Bennett, the estranged stepdaughter of a well-to-do Las Vegas businessman, is hounding the Las Vegas Police Department to reopen the investigation into her mother Rita's death -- alleging that, despite appearances to the contrary, Rebecca's greedy stepfather actually played a hand in Rita Bennett's untimely end. But no one is prepared for the news that CSIs Gil Grissom, Sara Sidle, and Nick Stokes report -- their investigation is inconclusive...because...

Published by Dana , 2 years ago
I'm a fan. This is a great story. Two mysteries in one, but you still get a great feeling of the characters while not getting bored to death on the science. Just enough to understand it, without needed your PhD in smartsville.

Published by Thriftbooks.com User , 14 years ago
This is another interesting, two-fold storyline book in the CSI series. While Brass, Grissom, Nick, and Sara deal with the body of a murdered woman found in a coffin (which wouldn't be so bad, except that it's not the body that was SUPPOSED to be in there!), Catherine and Warrick are working to uncover whether a death at a nursing home is natural, or had a little help. This is another quick read, and pretty interesting. The character development was good, and it had a believable and decent mystery.

The Pace Never Lets Up

Published by Thriftbooks.com User , 16 years ago
It's August in Las Vegas and the temperature is sizzling. The murder rate in town has increased along with the temperatures, putting a strain on the CSI team. A body is exhumed to determine cause of death, but it's the wrong body in the right casket. In another case, there has been a rash of deaths in a local nursing home and Catherine and Warrick set out to investigate. As in previous outings, Collins does a wonderful job in his characterizations. He adds depth to the characters we are familiar with from the TV series. The plots in this one keep the reader guessing and the pace never lets up. Another great CSI read.

Published by Thriftbooks.com User , 16 years ago
I bought this novel for my daugher who loves CSI:Las Vegas. She read the book in one night and continues to read it. She says it's even better than the TV episodes.

Published by Thriftbooks.com User , 17 years ago
Grave Matters is a great mystery novel, and ties in well with the TV series. As usual, there are two cases. One is when a medical examiners calls the CSIs in because deaths are happening a little too frequently in an assisted care facility. The other is when a court order forces the rest of the team to investige the death of a political big-wig's murder - by the daughter, who names her step-father. The care facility death shows death by injection of air - murder, which is investigated. But that doesn't compare to what the other CSI team finds in the casket of the deceased woman - somebody else entirely, which means somebody else is a killer who picked the perfect hiding spot for a body...

A great book in a great series

Published by Thriftbooks.com User , 17 years ago
I have read all of the CSI novels and haven't been disapointed once. I find them all very hard to put down. I can hardly wait for the next book to come out.
Trustpilot
Copyright © 2022 Thriftbooks.com Terms of Use | Privacy Policy | Do Not Sell My Personal Information | Accessibility Statement
ThriftBooks® and the ThriftBooks® logo are registered trademarks of Thrift Books Global, LLC