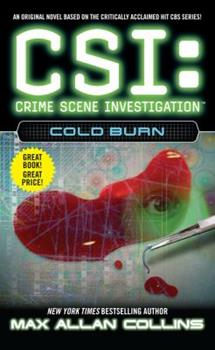 Remote. Peaceful. Picturesque. That's how the Mumford Mountain Hotel bills itself in its brochure, and it lives up to its billing -- most of the time. But this year, the hotel is hosting a prestigious conference for the study of forensic science, and the organizers have extended CSI head Gil Grissom an invitation he can't refuse. Joined by fellow investigator Sara Sidle, Grissom leaves the department in the capable hands of Catherine Willows and heads...

Published by Thriftbooks.com User , 18 years ago
When a park ranger discovers the naked body of a woman in the Lake Mead National Park, the Las Vegas CSI team is called in to investigate. With Grissom away at a convention, Catherine Willows heads up the unit to try and discover why this woman's body would be left in such a public place - as if someone wanted her to be found. Catherine, Warrick & Nick do not know who the Jane Doe is, but they know that she was suffocated and then frozen after she died so they have no idea how long ago she was killed. When they discover that she is Missy Sherman, the housewife who disappeared without a trace over a year ago, they try to sift through year-old clues, jog old memories and find some suspects. But, in the end, they are forced to rely on small bits of evidence to track down the killer...Meanwhile, in New York, Gil Grissom and Sara Sidle were lucky enough to make it to their hotel before a blizzard snowed them in. With the convention cancelled due to transportation issues, Grissom and Sara settle in to enjoy a weekend of rest when they stumble across the body of a man who has been shot and then set on fire in the snow. After a grueling stint guarding the body in the blizzard, a Canadian CSI teaches Sara and Grissom how to investigate clues in the snow. But with no backup and no crime lab to process the clues, Grissom has to use every bit of ingenuity he possesses to track down the killer before the blizzard ends and his killer is turned loose...I found this third book in the CSI series to be every bit as entertaining as the other books and the TV series. Collins does a great job at keeping the personalities of the TV characters consistent in the book and I can almost visualize how they would film the TV episode while I am reading. I enjoyed the Las Vegas plot with Catherine, Warrick & Nick more than the New York plot with Grissom & Sara, but it was interesting to find out how people process clues differently due to regional differences. If you enjoy the TV series you should enjoy the books - another great read by Collins!

Published by Thriftbooks.com User , 18 years ago
I really enjoyed this book. I liked that we were following a case in two different states. I also enjoyed the information we learned from the Canadian Mounty about crime scenes in very different weather and circumstances than Las Vegas. I believe that was the reason we were getting the 'lessons' from New York even though some people found the 100 pages of guarding a dead body boring. We already have the desert and the beach. Who knows, maybe they will create a CSI: Canada series and we can have a whole different set of crime scene scenarios. Sounds good to me!If you love CSI as much as I do, you will love this book.

Published by Thriftbooks.com User , 18 years ago
This was the first book of the CSI series that I decided to read in my spare time and I just loved it...Max Allen Collins is a brilliant writer! I finished the book in 2 days i like it so muchHere's a little background on the bookGrissom and Sara go to a Forensics Convention and encounter a major blizzard that traps them in the hotel and they find a dead body in the woods and they and a few others have to guard the body on 2 hour shifts until the blizzard endsWarrick, Catherine and Nick find a dead body in a state park that was wet but wasn't swimming and later figure out that she was frozen and also found another body in a landfillThat's all i'm gonna tell ya! I don't wanna ruin it for you so if you wanna find out what happens buy this book now, believe me you won't regret it!

If you love the show, this book is for you

Published by Thriftbooks.com User , 18 years ago
Great book, just like an episode of the show. It is great already knowing the characters...when the author describes character quirks, you can actually picture EXACTLY what he is talking aboutI love CSI and I loved the book

This Was The Best

Published by Thriftbooks.com User , 19 years ago
Catherine, Warrick and Nick are in Las Vegas investigating the murder of a woman whose body was discovered in Lake Mead National Forest. Grissom and Sara travel to upstate New York for a forensic conference where they stumble upon a dead body in the woods next to their mountain hotel. And then a blizzard hits and they are cut off from the outside world. Collins handles the background information on the characters without being tedious and although this is the third book in the series, I think it can stand alone. Both of the cases in this book are excellent but the makeshift lab they set up in Grissom's hotel room is particularly ingenious. I have enjoyed all three of the CSI books, but I think Cold Burn was my favorite. I look forward to more CSI stories from Max Collins.
Trustpilot
Copyright © 2022 Thriftbooks.com Terms of Use | Privacy Policy | Do Not Sell My Personal Information | Accessibility Statement
ThriftBooks® and the ThriftBooks® logo are registered trademarks of Thrift Books Global, LLC