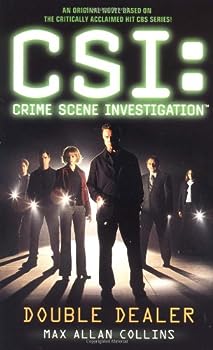 Meet the little known and even less understood heroes of police work in Las Vegas -- the forensic investigators. Led by veteran Gil Grissom, the remarkable team assigned to the Criminalistics Bureau's... This description may be from another edition of this product.

Published by Dana , 2 years ago
I loved the CSI Series when it came out on TV. Loved the original cast (no offense to those who have come and gone since). This book is just like that. The thrill of discovery, the questions, the process. Gil's quirky ways and comments and constant "Follow the evidence" advice. Thanks for bringing that back for me.

The cream of tie-in novels

Published by Thriftbooks.com User , 17 years ago
I would imagine that the first words out of the mouths of many Max Allan Collins fans reading this are: "Why is he writing CSI novels? Isn't he better than that?" and I would then have to imagine that they must have forgotten (or never knew) that, in between his various graphic novel and historical mystery projects, Collins has had a lively TV/movie tie-in sideline going on for some time now. Sure, his two Shamus awards are for entries in his Nathan Heller series (True Detective and Stolen Away, to be specific), but it was his novelization of Saving Private Ryan that gave him the "New York Times Bestselling Author" designation that has appeared on nearly every one of his book covers since. In any case, the bottom line is that Collins writes intelligent, detail-oriented, fast-paced novels (mysteries for the most part) and so is a perfect fit for CSI. His experience writing in the voices of already-existent television characters (NYPD Blue, Dark Angel) also serves well in his representation of Grissom, Willows, Brass, Brown, Stokes, and Sidle: every line reads as if it were delivered by the actors; and remember, these are original plots, not novelizations of previously-filmed teleplays, making the result that much more admirable. Double Dealer is the first novel in the series and contains a good amount of extra detailed history, in-depth predictive reenactments, and copious description, while still respecting the "reality" of the events from the first season. (Something that is also good to remember: later season events, relationships, and promotions are not reflected here, the only major drawback to reading a novel based on an ongoing television series.) A mummified corpse is discovered that carries the same shooter's-signature as a more recently dispatched victim. However, true to form, Grissom considers the two to be separate cases until the evidence proves otherwise. I'm hesitant to provide too much detail about the plot but series fans will love how Collins follows the normal procedure of a typical episode in Double Dealer -- all the way down to the jaw-dropping climax and the non sequitur ending. In addition, he adds his own brand of humor, particularly in the form of in-jokes during an interrogation in a video store. (He not only name-drops his own innovative DVD Real Time: Siege at Lucas Street Market, but also a classic from a lead cast member's past.) A satisfying read all around, Double Dealer enhances the CSI mythology without having to go outside the expected realm, and leaves plenty of room for further development, making it perfect for fans, but also approachable for the uninitiated. (Of course, this metafiction-loving reviewer would be tickled pink to see the worlds collide by having this novel adapted into a future CSI movie, bringing everything full circle.)

Hot On The Trail

Published by Thriftbooks.com User , 19 years ago
Gil Grissom, the graveyard-shift supervisior of the Las Vegas Criminalistics Bureau, takes up the trail of a professional killer in DOUBLE DEALER. The hunt starts in the small hours of the morning in a Las Vegas hotel where a man has been shot dead. Two bullets in the back of the skull less than an inch apart are mute testimony to the fact that the murderer was a professional. Gil, Warrick, and Sara--accompanied by Detective Jim Brass of the LVPD--work the crime scene. At the same time, Catherine and Nick roll on an investigation of their own, arriving at a building site where the mummified body has been found. This second murder was also the victim of two specifically placed shots to the head. Following up her own leads, Catherine turns up the story of Malachy Fortunato, a Las Vegas dealer working for the Mafia who supposedly disappeared with his stripper girlfriend in 1985 after ripping off the Mafia-owned casino where he worked. At first, Grissom keeps the two cases separate, but the evidence keeps linking the new murder and the old one. Tenaciously, the CSIs work their evidence, turning up fact after fact, slowly closing in on the murderer. Then Special Agent Culpepper of the FBI suddenly joins the hunt, further mystifying Grissom and his specially trained team. Why would the FBI be interested in either the old case or the new one? Then, the next murder occurs, and Grissom knows that the cases were definitely linked because the murderer has killed again to protect the secrets from spilling out about the old murder and what really happened to Malachy Fortunato.Max Allan Collins is the award-winning author of the Nate Heller novels, delicious blends of historical fiction and hardboiled private eye action. The Heller novels include TRUE CRIME, TRUE DETECTIVE, ANGEL IN BLACK, and the just-released CHICAGO CONFIDENTIAL. He also wrote the original graphic novel, ROAD TO PERDITION, which inspired the Tom Hanks movie of the same name, and wrote the novelization of that movie. Other novelizations Collins has written include IN THE LINE OF FIRE, AIR FORCE ONE, WINDTALKERS, and SAVING PRIVATE RYAN. For sixteen years, he also scripted the Dick Tracy cartoon strip. He's also written and directed movies that include MOMMY, MOMMY'S DAY, THE EXPERT, MIKE HAMMER'S MICKEY SPILLANE, and REAL TIME: SIEGE AT LUCAS STREET MARKET.DOUBLE DEALER reads like a well-done episode of the CBS television series. Collin's dialogue, pacing, and atmosphere are spot-on. The characters come to life on his pages, and the mystery stems from research as well as the author's own love of the historical elements presented by the Mafia. Forensic methods in the book are carefully explained and documented, another cornerstone of the television series, but within the scope of the book Collins seems to have a little more time and the reader has time to absorb the information and learn a little more. Even though there are many twists and plot complications, Collins never

Published by Thriftbooks.com User , 20 years ago
I was a little unsure when I saw this book. I love CSI, but I had read books that were taken from other tv shows, and came out very disappointed. In general, they are awful, but Double Dealer is definately the exception. The dialogue is written very well, no one says anything that you wouldn't see on CSI. Also, the characters are all true to the series and the descriptions enhance the reading experience. I really recommend reading this book if you love CSI. And judging from the reactions of my friends, that's about everybody. I swear, every time someone would see me with this book they'd go "Oh my God! There's CSI *books*?!" You may feel a little foolish, like I did, for buying a book that's taken from a tv show, but it's really worth it.

Published by Thriftbooks.com User , 20 years ago
Set sometime after the first season with the return of annoying FBI Special Agent Rick Culpepper from "Strip Strangler," the principal difference--other than the lack of background music and cause-of-death zoom-in reenactments--from the shows can be summed up by a Grissom line from "The I-15 Murders": "I curse more." However, it does give a broader depiction of the CSI universe with the occasional trip outside of Clark County, as well as an explanation as to why they're always reporting to the Clark County Sherrif instead of the Vegas PD chief. Small problems that Collins didn't thoroughly explain (like why Brass' desk is in the Homicide squad bullpen if he's still a captain after the Holly Gribbs fiasco) or just got flat-out wrong (like saying Nick had dated Kristy Hopkins when their relationship was little more than a one-night stand and three official criminal investigations involving her) don't detract from the overall story.

Published by Thriftbooks.com User , 20 years ago
When CSI debuted on CBS last year, I was heartened by the fact that the show's writers assumed the audience was smart enough to keep up with the science and the complexities of the characters. Thankfully, Double Dealer takes the same high road. Max Allan Collins does a terrific job of balancing characterization, plot, and those cool forensic science details in a much more satisfying manner than TV allows. Don't get me wrong: I love the show. This book, however, is even better. Feed your brain and your CSI addiction and put this one at the top of your reading list.
Trustpilot
Copyright © 2022 Thriftbooks.com Terms of Use | Privacy Policy | Do Not Sell My Personal Information | Accessibility Statement
ThriftBooks® and the ThriftBooks® logo are registered trademarks of Thrift Books Global, LLC