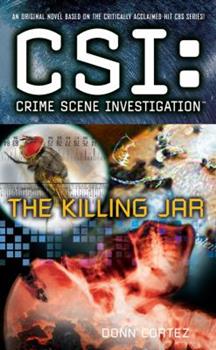 A teenager is found dead in his motel room, the cause of death: millipede poison...Now crime scene investigator Gil Grissom must aid CSI's Nick Stokes and Riley Adams against a serial killer whose knowledge of entomology rivals his own -- a brutal murderer who is not only using insects as the tools of destruction, but actually modeling the attacks after their behavior.... In the meantime, CSIs Catherine Willows and Greg Sanders must investigate a...

Published by Dana , 3 months ago
If you're okay with bugs, spiders and things that are crawly, then go for it. I'm not, so I was creeped out for most of this story. Pushing that aside, again the science is strong, and I just loved the show, so I love the books because they're written like the show. I do like the series, but I can see a difference in the authors as the books progress.

Could CSI Be Better In Novel Form? Maybe!

Published by Thriftbooks.com User , 12 years ago
Sure I've been a fan of CSI for years, else I probably wouldn't have noticed that there are now books out about the series! The Killing Jar by Donn Cortez took place during the 9th season; however, I either missed it...or... There is quite a difference in seeing the TV show versus reading a novel! The main difference is the speed of the TV programs--everything is moving so fast that you never spend too much time on anything other than following the clues to solve the murder(s). But, in the novel, you can read at your own pace, and you can take your time and see if you perhaps can follow or solve the crime yourself! More like a whodunit novel! But mostly I enjoyed the development of characters, reading their thoughts which of course is impossible on TV, and setting the stage more in the novels. Of course, I easily pictured the characters' faces in my mind, but I got to know them more in just one book than I would have on the screen. Also, seeing the words, you realize that you probably would have missed them if quickly said. For instance, would you know what a "tinkle tweaker" was if you just heard it during a conversation? Grissom is supposed to be attending an entomological professional conference that happened to be scheduled in his own town; however, when Nick and Riley was at their crime scene and realized how the individual had been killed, Nick knew he had to at least notify Gil! For what looked to be a suicide, using a bag over his head, was actually death--by Millipedes! And the next death resulted in Dr. Robbins being seriously bit by a spider who attacked him when he opened a body for autopsy! Catherine and Greg were handling another bizarre death when they discovered that their victim had died with his body filled with...wax! Following the "wax" clue got them involved with those making and dealing meth and then into discussions with artists and actors who created bullets made out of wax, proving it by shooting Greg! Of course Grissom got involved with the investigation and also found that several of his acquaintances from the convention were curious to learn about what was happening, even when everybody knew that they would have to be considered as suspects, since the deaths which occurred had to have been planned by someone with exceptional knowledge of entomology... All of us know that in CSI, the cases are always solved through the science, but these two were more unusual than some others I've seen. I thoroughly enjoyed the movement from TV into novels. The author has the opportunity to expand far beyond what is shown on TV and, for me, that was the main enjoyment I found in the novel. How about you, I've always considered CSI top TV entertainment. But having the novels come out after I know all of the characters and practices, I found the novel even more enjoyable reading! Book Received From SFReader G. A. Bixler

Published by Thriftbooks.com User , 12 years ago
It's been a banner year in CSI novel fiction, with the wonderful Brass in Pocket coming out last fall and now Donn Cortez's The Killing Jar making its way to store shelves. While my first experience with CSI novels wasn't the most pleasant, these last two have been wonderful novels. Cortez continues the streak with a truly interesting premise that examines a character as much as is possible in a tie-in novel, as well as giving the reader an intriguing plot as well. A teenager is found dead in a hotel room, killed by millipede poison. Gil Grissom, Nick Stokes, and Riley Adams are forced to face off with a deranged killer whose knowledge of entomology rivals Grissom's own, and who uses that knowledge to not only kill, but to explore the effects of his murders. He may be Grissom's toughest opponent yet. Meanwhile, Catherine Willows and Greg Sanders are investigating the death of a Hawaiian man who was found engulfed in hardened wax and who had his fingers cut off. He's the overlap between the world of crystal meth and the artistic world, and these two crossing is never a good thing. The format of The Killing Jar is quite basic, with the two cases operating totally independently of each other. In fact, the only crossover at all is the occasional update that Catherine has to give Grissom because he's the supervisor. Otherwise, neither case overlaps with the other. While Catherine and Riley were heavily explored in Brass in Pocket, it's Grissom's turn to shine in this one. The wax-covered corpse case, while presenting some interesting CSI work, doesn't have near the weight of Grissom's case. Cortez gives Greg and Catherine some good character moments, but he doesn't really explore them too much (other than Greg's fascination with the annual Burning Man event in the Nevada desert). Instead, Grissom is the focus of this novel, and Cortez does a great job with him. This book takes place between the first ten episodes of Season 9 of the television series. Warrick is dead, Sara Sidle (Grissom's lover and fellow CSI) has gone away in search of herself, and Grissom is beginning to reflect on his time in Las Vegas, wondering whether it's time to hang things up and follow Sara. This was all fully explored in those ten episodes, but Cortez does a good job adding to that here. Memories of Warrick abound, and he also reflects back to a couple of conversations he had with Sara about certain things. Meanwhile, he's faced with a killer who seems to be trying to test him. I loved all the little "bug facts" that Cortez presents to the reader in Grissom's analysis of the case. It was fascinating watching Grissom try to understand the killer, thinking about insect societies and how they work, and how that can be translated into thinking about human societies. Whenever the cases themselves might have dragged a little bit, I was drawn in by all of the research Cortez obviously did on this subject. The best thing is, none of it is presented in massive

This Book Would Fit as a Series Episode

Published by Thriftbooks.com User , 12 years ago
Donn Cortez has a knack of getting the characters right and producing cases that fit in with the CSI series he's novelizing. The Killing Jar is no exception. With the Grissom character gone from the show, this story gives fans a good "Gil story."
Trustpilot
Copyright © 2022 Thriftbooks.com Terms of Use | Privacy Policy | Do Not Sell My Personal Information | Accessibility Statement
ThriftBooks® and the ThriftBooks® logo are registered trademarks of Thrift Books Global, LLC