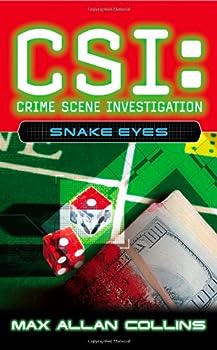 Luck is on the side of most during the incident at the Four Kings Casino and Hotel, when the simmering tension between two rival biker gangs suddenly boils over into all-out violence -- miraculously,... This description may be from another edition of this product.

We receive 11 copies every 6 months.

Published by Thriftbooks.com User , 13 years ago
I am an avid self-proclaimed CSI Las Vegas fan. This book followed the characters well and was consistant with the story line.

Published by Thriftbooks.com User , 14 years ago
Another great CSI read, good for an evening's entertainment. While Catherine, Grissom, Sara, and Nick are called away to Boot Hill to deal with the aftereffects of a shoot out in a casino, Warrick, Greg, and Captain Brass must deal with a seemingly never-ending series of violent crimes back in Vegas. Highly recommended for fans of the television show!

Published by Thriftbooks.com User , 15 years ago
I have read all the books in this series and love them all. This book was no exception. The only reason I gave it 4 instead of 5 stars is there was a little more cursing in this book, which I felt was unneccessary. I will read the next book when it comes out. I look forward to it.

There's A Lynch Mob Coming For You, Sheriff Grissom!

Published by Thriftbooks.com User , 15 years ago
After a shoot-out between rival motorcycle gangs leaves one of the leaders and a young woman dead, the gangs square off and it looks like a bloodbath is imminent. Catherine Willows, Gil Grissom, Nick Stokes, and Sara Sidle ride into town to clear up the confusion and put the world back to rights. In the meantime, back in Vegas, Warrick and Greg get totally swamped with murders on a night that just won't end. Greg gets into his first stand-off over pistols, works his first bank robbery, and sees the king of the jungle dead up close. The novel is partially based on real-life events that took place outside of Vegas, but the authors have taken liberties with the story. SNAKE EYES is the eighth CSI tie-in novel that Max Allan Collins and his behind-the-scenes writing partner Matthew V. Clemens have done. They've also done two of the CSI MIAMI novels and one of the television show, BONES. Collins is a multi-talented author and a grandmaster of mysteries who was recently inducted into a Lifetime Achievement Award at the latest BoucherCon. Matthew V. Clemens has been Collins' writing partner on some projects for the last few years. Their new short story collaboration anthology, MY LOLITA COMPLEX, will be out in November. SNAKE EYES "feels" just like a television episode of the series. The characters are all their in their glory. The book is set in the fifth season (before Stokes was kidnapped in the Quentin Tarantino episodes) and introduces Warrick's impending marriage to his wife, though she's kept off-stage. Grissom is done especially well, relating to the local lawman, Lopez (as jaded as any of John Wayne's cowboy characters) and standing tall among the bikers. Their references to Western movies is well done and foreshadows some of the action. The book is a thoroughly enjoyable read to a fan of the television series, but it's also a great little mystery to while away a lazy afternoon or a rainy day. Collins and Clemens have really hit their stride in the series and hopefully they'll continue for some time to come.
Trustpilot
Copyright © 2022 Thriftbooks.com Terms of Use | Privacy Policy | Do Not Sell My Personal Information | Accessibility Statement
ThriftBooks® and the ThriftBooks® logo are registered trademarks of Thrift Books Global, LLC