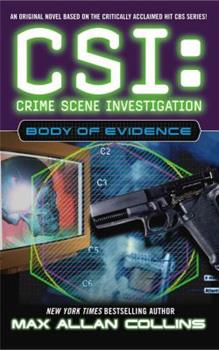 Early one quiet Monday morning, in an empty executive office, assistant Janice Denard begins to prepare for another ordinary day - but instead discovers evidence of horrific crimes, shocking photographs left abandoned in a printer. Now, with the help of the LVPD's computer forensics experts, the CSI team must track through hardware and software, deception and deceit to find the perpetrators. But while Willows and Stokes investigate the once well-hidden...

Published by Thriftbooks.com User , 15 years ago
Since I'm such a big fan of the show, I decided to try one of the novelizations. I got caught up in the story easily enough, and even finished the book quickly (a matter of one evening). Reading BODY OF EVIDENCE was a lot like watching an episode of CSI, and yet at the same time there were enough differences to keep it interesting--and, at the same time, irritating. Character-development doesn't seem to be a big thing in these serial novelizations; nor, in fact, does a believable plot. And this book could have used some editing, as there are a LOT of grammatical errors that took away from my enjoyment of the story throughout the entire book. But it is a quick read, and it DOES feel like I'm "watching" an episode of CSI. I enjoyed this one enough that I'm now reading a second, so I guess the author did his job!

Published by Thriftbooks.com User , 15 years ago
The week begins for most people on Monday morning, but CSIs Catherine Willows and Nick Stokes are just ending their Sunday night shift when they get a call to go out to a local advertising agency because one of the partner's personal assistant has found child pornography on her boss's printer. The investigation is instantly difficult because several of the employees are on vacation and it is impossible to tell who was in the office over the weekend. Sifting through this Body of Evidence is not going to be easy. IT expert Tomas Nunez is called in to assist the technical part of the investigation and he discovers which computer the print command was sent from, but when the CSIs find multiple fingerprints on the keyboard of that station, they realize that they've got a real corker on their hands. Add to that their personal feelings about child pornography and this is going to prove to be one emotional case, with more than one instance of misguided accusation. Elsewhere in Las Vegas, Gil Grissom, Warrick Brown, and Sara Sidle are called to investigate a woman's body discovered by a local citizen. The profile of the case is heightened instantly when her identity is confirmed as the long-missing secretary of Mayor Darryl Harrison. Sheriff Brian Mobley immediately takes himself off the case because he has everything to gain by implicating the mayor in this crime: Mobley was planning to run against the mayor for his seat. Mobley's campaign manager Ed Anthony has been doing everything in his power to help Mobley, including several things he shouldn't have done. Author Max Allan Collins (again with research and plotting assistance from Matthew V. Clements, a true-crime writer in his own right) is on a roll with these CSI novels, and Body of Evidence is no different. He captures the tone, setting, and characters from the television series perfectly, complete with the touches of humor that so wonderfully break the tension and illustrate the friendships that lie under the professional relationships. The computer and Internet knowledge contained within Body of Evidence is just another example of the fine work done by Collins and researcher / co-plotter Matthew V. Clements (a true-crime writer in his own right and the co-author of several short stories with Collins). The details are part of what makes CSI so fascinating, and Collins and Clements do not skimp. Tie-in novels like Body of Evidence are ideal for fans who are looking for an original CSI mystery during the summer rerun season. Plus, the stories are longer so, generally speaking, there is room for more detail and character development, making for a more fulfilling, multi-hour experience -- more like a CSI movie than a typical episode.

Published by Thriftbooks.com User , 18 years ago
This is the first book in the series that I have read. I purchased it at an airport bookstore. It is a quick read. It was for all intents and purposes, reading an episode. The good thing about READING the stories is that you get more insight into what the major characters from the show are thinking, you get more in-depth. The crimes are quite believable, the major and secondary, characters are developed enough so as not to be transparent, and the plot moves quickly. This is light reading, not much thinking involved. What you see is what you get. I wll read more from this series. You should also.

Enjoyable Forensic Mystery, But Not The Best in the Series

Published by Thriftbooks.com User , 18 years ago
When Catherine Willows and Nick Stokes catch a call at the end of their shift reporting "unknown trouble", it is all Catherine can do to drag herself down to the Newcombe-Gold Advertising Agency, knowing that her daughter will once again wake up to her regular babysitter instead of her mother. But, when Catherine and Nick discover that the unknown trouble involves graphic photos of child pornography printed from Mr. Gold's computer, they both are willing to do whatever it takes to find the person who would buy such filth. All of the evidence points to one man in the office, even though the computer forensics show that his computer was not used to print the photos, but Catherine's gut tells her that the obvious suspect is not the one who did this - but who did?Meanwhile, Grissom, Warrick & Sara catch the case that could make or break their carriers outside of Nellis Air Force Base. They discover the body of an unknown woman, called in by a good Samaritan. The body was carefully wrapped and duct taped, but when they open up the package, they recognize the face of Candace Lewis, the Las Vegas mayor's personal assistant who disappeared a few weeks past. Grissom is forced to put aside his distaste of politics and deal with the mayor's relationship with Candace and the sheriff's political aspirations. With so much pressure coming from outside sources to solve the case and keep the details under wraps, Grissom is forced to walk on eggshells and use careful maneuvering in his investigation or ruin the wrong person's career...This is the fourth book in the CSI series by Max Collins and, while it was not as entertaining as the first three, it was still a very enjoyable read. The endings of the mysteries were particularly interesting in that it reminds us that sometimes the simplest and most obvious solution is the correct solution, instead of the convoluted and complex hypotheses that investigators come up with while working on cases. Again, Collins does a superb job of keeping the TV personalities consistent and clear - I always feel like I am watching an episode on TV when I read his books, I just get more detail this way!
Trustpilot
Copyright © 2022 Thriftbooks.com Terms of Use | Privacy Policy | Do Not Sell My Personal Information | Accessibility Statement
ThriftBooks® and the ThriftBooks® logo are registered trademarks of Thrift Books Global, LLC