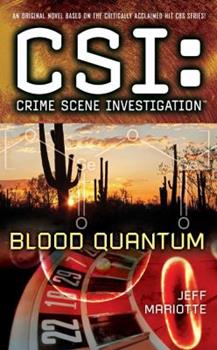 The Las Vegas team of investigators has its hands full following a free-spending night at an exclusive nightclub which leaves the chairman of the Cloud Mountain Paiute Tribe dead. Already surrounded by controversy, the victim had a message scrawled in his own blood at the scene that would indicate a crime of revenge--and members of the chairman's inner circle aren't talking, which leads to a vicious cycle of violence and murder.... ?

Published by Thriftbooks.com User , 11 years ago
This was another solid entry in the CSI tie-in novel series. The plot was interesting, Native American issues were handled respectfully, and characterization was on target. It didn't move as quickly as other novels in the series but overall I found it an enjoyable read. Kindle edition: This was well formatted and free of any noticeable typographical errors.

Published by Thriftbooks.com User , 11 years ago
Greg Sanders and Catherine Willows had been assigned to what seemed to be a routine death of an individual who had broken into a large estate in the first case assigned to the CSI Team in Blood Quantum by Jeff Mariotte. He had been killed by the head of security on the Cameron staff, when the man, who was obviously homeless, had somehow gotten in, but had reached into his pocket when he was told to stop. Drake McCann didn't feel that he had a choice--he had shot him. But it was found that the man who had entered the gate had the code to open the gate and that is what he had been reaching for in his pocket! At the same time, Ray Langston and Nick Stokes met Jim Brass at the home of Robert Domingo, who now was dead, with the word Quantum, written on the wall above in what appeared to be blood. Everybody was at a loss for understanding what the word Quantum meant; however, since Domingo was tribal chairman on the Grey Rock Paiute Reservation, Ray knew a friend of his could help in determining what the word meant. While Nick and Brass made their way to the Reservation to meet with the police there, Ray indeed discovered that Quantum referred to the rule by which individuals were determined to be Paiute for purposes of receiving funds from their various tribal activities. Recently, the Tribal Council had voted to increase the percentage by which that judgment would be made. Tension had developed, as some individuals who had lived their lives on the reservation were no longer recognized as being sufficiently blood Paiute. This meant that Domingo and others would be getting even richer. Especially since they were in the midst of approving plans for a casino! Once the Paiutes knew about the murder of Domingo, Nick and Jim found themselves involved in a shootout and investigating, though they had no legal jurisdiction to do so. As Greg and Catherine track down the identity of the homeless individual, they discover in the place where he had lived that there was sufficient DNA to identify him as the missing, presumed dead son of the Cameron family, as well as evidence that members in the family were slowly being poisoned! Catherine as supervisor lends a different feeling to the CSI team. She is more prone to speak and act out quickly, putting herself on the line. Greg plays a major role in closing this case; frankly I enjoy him much more as an investigator than as the technician he formerly played. In any event, being the hero was an intriguing role for him. Ray is totally different on the team than Grissom so he's still making his place. I miss Grissom, but am enjoying Ray for his own contributions and background he brings to the team. Once again, I'd say I enjoyed reading CSI even more than watching the TV program! For readers, that means that this series could continue for as long as there are crimes to be solved! Forever? This story picked up a full 10 from this reader! Book Received From SFReader G. A. Bixler
Trustpilot
Copyright © 2022 Thriftbooks.com Terms of Use | Privacy Policy | Do Not Sell My Personal Information | Accessibility Statement
ThriftBooks® and the ThriftBooks® logo are registered trademarks of Thrift Books Global, LLC