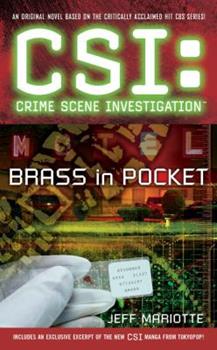 Far from the glittering lights and 24/7 spectacle of the Strip, the Las Vegas Crime Lab's team of investigators is gearing up for a rough night ahead.... A brutal shooting at a cheap motel may be business as usual for CSIs Catherine Willows and Nick Stokes, but as they process the crime scene and quickly identify the victim as a noted local private investigator, nothing could prepare them for the shock of finding physical evidence belonging to none...

Published by Dana , 3 months ago
So Grisholm is mostly absent in this story, which is a bit of a bummer, as he's my favorite character here. (akin to Dr. Brennan in the Bones show). Catherine takes charge while Grisholm is absent and Greg takes a larger role than we've seen. As the title indicates, Brass is caught in this one, but he doesn't have the starring role until the end of the story. Still, all told, a good story. The story follows Catherine in her supervisory role and another busy Vegas night of crime. Not particularly violent or gruesome, but a very interesting case.

Published by Thriftbooks.com User , 12 years ago
Being a big fan of the CSI television series (only the Las Vegas one, of course), I wanted to give the tie-in novels a chance as well. My first effort, Ken Goddard's In Extremis, didn't turn out that well, but I wanted to give the novels a second chance. My eyes brightened when I saw the latest novel, Jeff Mariotte's Brass in Pocket. While I haven't been a big fan of Mariotte's (I didn't like the one Star Trek novel of his that I read), I didn't hold that against this book. It's a good thing I didn't, as this is a marvelous tie-in novel, doing everything it can to give the characters depth despite not being able to radically alter them. That's a mean feat, and something that Mariotte does very well. It's a busy night in the crime lab. Gil Grissom is off in Washington at a conference and then a Congressional testimony, and the lab is very shorthanded (this novel takes place during the 10 episodes before William Peterson left the show, so after Warrick Brown's death). But murder doesn't wait until it's convenient, and three crime scenes occupy their attention. A brutal shooting at a cheap motel that may involve police Captain Jim Brass, who's not answering Catherine Willows' phone calls. A "locked room" mystery where a pilot lands a plane at a small airport and is discovered dead in the pilot seat, and a gruesome find of some animal bones as well as a recently slain sheep that may be the lead up to a serial killer. And then Catherine's daughter calls with her problems! One thing I loved about Brass in Pocket is how much Mariotte uses the CSI characters we all know and love and does something different with them. He gives us some insight into how they think without treading on the toes of the TV show. He brings out a part of Brass' past (can't say what, as it's a spoiler) that adds to his character, though it's not a major enough addition that it transforms how we feel about the character played by Paul Guilfoyle. Since Riley's off the show now, Mariotte has a bit more freedom with her, and he gives her more depth than last season's episodes ever gave her. I loved her sense of humor and how she kept needling Greg, but she's got a darkness to her as well. Another great thing about the book is how Mariotte ties at least two of the stories together thematically. The last thing Catherine needs during this busy time, where she's temporarily in charge while Grissom is away, is to have to deal with Lindsey's problems. But she feels guilty because her job keeps her away so often that she's very happy that Lindsey is bringing the problem to her. Her statements to her daughter about friendship and how we can only see the side of people they want us to see, even if they are our best friends, really ties into the Brass storyline. The other two storylines, while not necessarily tying together at all, are also very well-written and imaginative. Mariotte does a good job with the "CSI-speak," all the technical terminology that we don't have to

Wasn't what I expected but it's pretty good.

Published by Thriftbooks.com User , 12 years ago
The book is in the timeline where Sarah has left, Brown is dead and Grissom is still in charge although he's away at a conference during the entire book. From the title and the synopsis, I was expecting Brass to have a big part in the book. Unfortunately, that wasn't the case. While he's mentioned throughout, he doesn't really make an appearance until the very end. Catherine has a huge part in the book and the author did a good job with her. Actually with the exception of Brass and Grissom, everybody had about equal parts in the book. If I had one bad thing to say, it would be there were too many cases. It was a bit hard to follow the facts of everything especially when Catherine seemed to have her hands in all of them. I don't know if that was done intentionally. It's possible it was intentional because the author put Catherine in charge and several times reference was made to the fact that she had no idea how Grissom ever got anything done because of all the responsiblities. So, I'll give the author the benefit of the doubt on that one. As for the multiple cases going on... There were 4 cases I think. #1. Murder in a hotel room and a missing female victim/suspect. #2 Murder on a plane. #3 Missing girl. #4 Mass animal grave that may be the work of a budding serial killer. I think that was all of them. Like I said, it got a bit complicated. Overall, it was a good book. Not great but good. I would buy another CSI book from this author but in all honesty, I would buy another CSI book from any author. I'm glad they're still writing them.
Trustpilot
Copyright © 2022 Thriftbooks.com Terms of Use | Privacy Policy | Do Not Sell My Personal Information | Accessibility Statement
ThriftBooks® and the ThriftBooks® logo are registered trademarks of Thrift Books Global, LLC