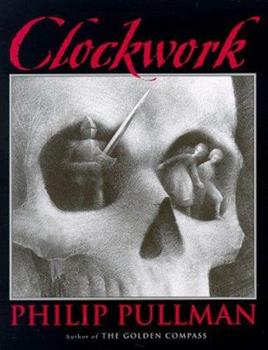 Clockwork : Or All Wound Up

An apprentice clockmaker facing failure, a writer with a story he can't control, a girl whose courage will need to match her kindness, a clockwork knight with murderous tendencies, and a doctor who just might be the Devil: their stories come together piece by piece in this chilling tale where nothing is as it seems.

Published by Thriftbooks.com User , 14 years ago
I just recently discovered Phillip Pullman while doing research on the Whitbread Children's Book Awards. His fantasy novel (for children? young adults? adults?) The Amber Spyglass won the award for both Best Children's Literature and the over all Book of the Year Award in 2001. That novel is the third in the His Dark Materials trilogy. Clockwork is a much shorter, perhaps less ambitious work, but in many ways just as complex. The story takes place in a German town, "in the old days..." when "...time used to run by clockwork." It is the evening before the unveiling of the next great mechanical figure for the town's famous clock. Everyone in town gathers at the local inn, including the Clock Maker's apprentice (whose clockwork figure will be his "graduation" present to the town), and the local story teller. Karl, the apprentice clockmaker confesses to Fritz the story teller, that he has failed to complete his clockwork figure, that he indeed has nothing at all to offer for the unveiling the following day. He is despondent and speaks of killing himself before the sun comes up. So the book begins, or one part of the book, as there are layers here: stories within stories, like the complex workings of a mechanical clock. Fritz the story teller is at the inn that night to read his next great novel aloud, a story which we learn he has not finished but hopes be able to come up with an ending as he goes along. Along with a somewhat fairytale quality to it, Clockwork has elements of suspense and horror. This was the most "creaped out" I have been with a children's book since first reading Coraline by Neil Gaimon. Highly recommend this book for children ages 11 to adult (if they are not too easily scared...)

Hold your ghost stories and try this!

Published by Thriftbooks.com User , 21 years ago
My nine year old daughter and I stumbled upon this book in a bookstore. Philip Pullman has since become one of our favorite authors, starting with this book. The story is suspenseful, engaging, extremely well written and hard to put down. It's a tiny bit scary (for a nine year old struggling to stay awake so she can savor each line), but perfect to read together with your children. I don't know who enjoyed it more, my daughter or me!

Published by Thriftbooks.com User , 21 years ago
At first it is deceptively simple, but at later reads, all of the events in the book fit together closely, like clockwork. This book contains deep issues of life, death, and moral weaknesses. It should NOT be just for children. I'm a teenager, and I loved it! A must-read!

Philip Pullman does it again

Published by Thriftbooks.com User , 22 years ago
Great book. Very creepy, with some great suspense. The illustrations are beautiful and very appropriate. Some readers have pointed out that the characters are underdeveloped--yes, they are, but that's not at all a fault, as this is a story in the style of folktales, where the characters aren't meant to be fully developed. They don't have to be. All of you who were enchanted by Philip Pullman's His Dark Materials trilogy will want to check this out. It's an entertaining quick read, and it will satisfy your hunger for more Philip Pullman books.

A wonderful story by a master story-teller.

Published by Thriftbooks.com User , 22 years ago
I am a huge fan of The Golden Compass and The Subtle Knife, the first two in the 'His Dark Materials' trilogy, and am anxiously awaiting The Amber Spyglass, the third. Even though this is a different style of witing it is still very good. It has an amazingly complex plotline for such a short book. Set in a small town in Germany, it's about Karl,a clockmaker's apprentice, who must make a new clockwork figure for the famous clock in town square, Fritz, a novelist, who must finish his oddly spine ting story, Clockwork, before it's to late, and Gretl, a young barmaid, who becomes our brave heroine. It's an intriguing story that I recomend to anyone who enjoys the utterly strange mixed into their fantasy. (Note: The characters aren't very advanced and need imagination)
Copyright © 2020 Thriftbooks.com Terms of Use | Privacy Policy | Do Not Sell My Personal Information | Accessibility Statement
ThriftBooks® and the ThriftBooks® logo are registered trademarks of Thrift Books Global, LLC