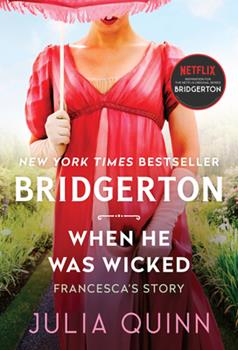 When He Was Wicked: Bridgerton

(Book #6 in the Bridgertons Series)

A New York Times BestsellerFrom #1 New York Times bestselling author Julia Quinn comes the story of Francesca Bridgerton, in the sixth of her beloved Regency-set novels featuring the charming, powerful Bridgerton family, now a series created by Shondaland for Netflix.FRANCESCA'S STORYIn every life there is a turning point. A moment so tremendous, so sharp and breathtaking, that one knows one's life will never be the same. For Michael Stirling, London's...

Can people not read?

Published by Thriftbooks.com User , 17 years ago
To all those who gave this book a negative review because it wasn't all sweetness and light, I have to question your reading comprehension skills. If you knew from the other Bridgerton books that Frannie loved her husband very much, and you know (if you bothered to read the back of this one) that her beloved is now dead, how could you have not realized that this was going to be a darker novel? She is in mourning! She is not going to be boisterous and charming like her siblings. If she had been, you probably would have trashed Quinn for not making her somber enough. I haven't lost a spouse, but I imagine that falling in love again would be agonizing, and I think Quinn portrayed this brilliantly. As she did with Michael, who is struggling with his own guilt. But none of this should have been a surprise to anyone who took the time to figure out the plot ahead of time. If you were shocked by the more serious themes of this book, you have only yourselves to blame for not paying attention. Julia Quinn is an amazing writer, and I love that she used this book to show how broad her talent is. Not all of us want our authors pigeon-holed into writing the same book over and over again, only changing names and basic plot points. Brava, Ms. Quinn, and don't let a few folks who can't handle variety dampen your spirits.

Published by Thriftbooks.com User , 18 years ago
In 1818, the first time ever Michael "The Merry Rake" Stirling saw Francesca Bridgerton he knows he is in love although he never experienced that feeling before. However, he can not act on his emotion because Francesca is to wed his best friend, his cousin John in less than two days. Michael ironically thinks that he now has two new feelings: love and for the first time envy. Ironically, he never coveted the earldom or the wealth of the man he considers his "brother".Two years later, Michael hides his love for Francesca from her and his cousin. John complains of headache and soon afterward he, not quite thirty and in seemingly perfect health, is dead. At twenty-two, Francesca is a widow and Michael is the earl. He still hides his feelings while they mourn their loss until one innocent night he offers simple solace that turns into heated lovemaking. The aftermath is that both feel guilty as if they let down John. As they evade one another so as not to explore their feelings, Francesca begins to wonder if John arranged the whole thing as a heavenly matchmaker.Title aside as no one is "wicked" in a nasty sense; fans will appreciate this wonderful Regency romance starring a loving relationship triangle between three wonderful protagonists. John was a nice respected person loved by his wife and his cousin so that his memory serves as a ghostly barrier to Michael and Francesca following up on their feelings. The two illnesses that John and Michael respectfully suffered from provide a feel for the era as Julia Quinn uses that to anchor her sixth fabulous Bridgerton book.Harriet Klausner

not the usual, but just as good

Published by Thriftbooks.com User , 18 years ago
It seems to me that with each new novel Julia Quinn is trying to separate her stories more and more from the cookie cutter formula. In fact, she sets herself up for quite a big challenge with When He Was Wicked.First of all Ms. Quinn defies convention by giving her heroine a husband with whom she is deeply in love--a husband who is not the hero of the story. Secondly, the hero of the story, Michael Stirling, is in love with our heroine before the story even begins. Unlike many of Ms. Quinn's novels, this is no lighthearted read. The subjects of death and guilt play a major role in the lives of her characters. However, I disagree with the review. I do not believe the heavy subjects "weighed the book down," but rather fleshed it out instead. Had Ms. Quinn skimmed quickly through the grief, her characters would have lost much of their depth and a lot of my respect. Yes, there were moments when I felt a bit impatient. But the emotional build-up comes to such a splendid (and trust me, I mean splendid) climax when the hero and heroine come together, that I felt it was all worth the wait. As to the characters, Michael Stirling ranks as my second favorite male right after Colin Bridgerton (who has a couple of lovely cameos in this one, by the way). He's the classic rake, only slightly altered by Ms. Quinn's lovely sense of character and honor. My biggest disappointment with this novel, however, was Francesca. She's much less quirky and a lot less interesting than her siblings, unfortunately. She troops through the novel like quite a martyr, which while I found admirable, it wasn't quite as endearing. However, the secondary characters are the typical Bridgerton fare, funny and entertaining as usual. Also, the dialogue in this one does not disappoint and is just as snappy as Julia Quinn fans have come to expect. I was surprised to find that Ms. Quinn even wrote the tragic scenes with a very realistic, touching ability.All in all, I was not disappointed by this book. I think it's refreshing to have an author in the genre not afraid to challenge herself with each new novel. And I love the fact that the conflict in Ms. Quinn's novels comes completely from the lives and troubles of her chracters--no cheesy evil villains or subpar mystery plotline here. I don't recommend this one if you're looking for a lighthearted escape. It's a lot more involved than JQ's other novels, but just as quality. Personally, my only disappointment is that now it will be yet another long wait until the next one.
Trustpilot
Copyright © 2022 Thriftbooks.com Terms of Use | Privacy Policy | Do Not Sell or Share My Personal Information | Accessibility Statement
ThriftBooks® and the ThriftBooks® logo are registered trademarks of Thrift Books Global, LLC