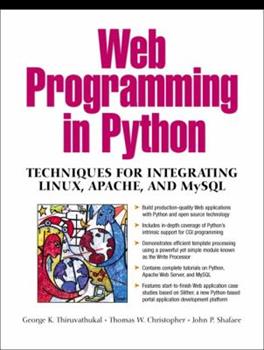 If you're ready to use Python and open source in a real production environment, this book delivers the techniques and code you're looking for. Softcover. This description may be from another edition of this product.

Published by Thriftbooks.com User , 17 years ago
Talk about a sleeper! This book may be one of the best kept secrets in the world of Web programming books. It could be described as Web programming with Python and Open Source tools. In the hands of most authors, this much breadth would produce a multi-volume set of books complete with material that could readily be found elsewhere. The reader is fortunate that it was written and edited by educators who know how to present the pertinent and relevant details of the OS, the Shell, the Python language, Apache, SQL. Lesser books give you the world but require the reader to determine what is relevant and how to use the features described. The manuscript is original and efficient; definitely not a regurgitation of material available on the Web. The advanced sections pertaining to the development of an application server are rich with good programming methodologies. However, some chapters may be exceedingly routine for intermediate and/or advanced server-side programmers. The book could be described as a "LAMP" developer guide for novices (where the P stands for Python not Perl). A previous reviewer cited some typos. In an effort to keep that comment in perspective, I believe the number of errors for this amount of breadth + depth is very low.

Published by Thriftbooks.com User , 18 years ago
This book covers everything about getting a web application together. If you accept the Python Way, (a wise idea I think) you could look at the book as an attempted successor to Lincoln Stein's original compendium about how to serve web applications from top to bottom.If you're a person who knows something about programming in general but not enough about programming for the web in specific, this book is just the thing to help you identify and fill in the gaps.I do have a complaint that the writing could have been a bit smoother and the editing a bit more careful. A far more serious flaw, though, is the authors' failure to keep the software framework on which the book is based up-to-date. The upshot is that while the book is very informative, it's unfortunately quite a slog getting the examples working.While I recommend the book for its explanatory power, unfortunately it doesn't provide a direct path to getting your project online. If the framework were better maintained and documented, this could still turn out to be the only book you need.

Published by Thriftbooks.com User , 19 years ago
This book is surprising in its breadth of coverage (Python basics,Python advanced topics, MySQL, Apache/CGI and net infrastructure) andthe depth of coverage of each. It is a great single reference forcoming up to speed on each aspect such that you could actuallyimplement a medium-sized web application based largely onjust what is in the book. For those that are already familiar withany of these topics, that chapter can easily be skipped. This book is not for the complete beginner though as it would be impossibleto cover so much ground if it were written with the Dummies mindset.Overall, it does a very good job explaining subtle points that anexperienced programmer would want to know as they attempted toimplement a first application with these technologies. Good job.

Published by Thriftbooks.com User , 20 years ago
I don't know of any better book for those who need a quick start on serious applications using the Linux platform. It was written from the trenches, by experts in the subject who are not afraid of getting their hands dirty. The authors demonstrate a deep understanding of the details and have managed to keep a practical perspective. I haven't tested the code examples (bugs?), but the framework is extremely easy to use and very clever. I wish more books on Business Management and new technologies were written like this...
Trustpilot
Copyright © 2022 Thriftbooks.com Terms of Use | Privacy Policy | Do Not Sell My Personal Information | Accessibility Statement
ThriftBooks® and the ThriftBooks® logo are registered trademarks of Thrift Books Global, LLC