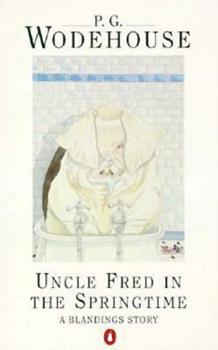 Uncle Fred in the Springtime: A Blandings Story

Frederick Altamont Cornwallis Twistleton, Fifth Earl of Ickenham, better known as Uncle Fred, is back "to spread sweetness and light" wherever he goes. At the request of Lord Emsworth, Uncle Fred... This description may be from another edition of this product.

Published by Thriftbooks.com User , 17 years ago
Professors of literature are fond of writing that the three greatest novelists of the twentieth century are Marcel Proust, Thomas Mann, and James Joyce. In this, they could hardly be more in error. The only contender for the title of the greatest novelist of the twentieth or any other century is P.G. Wodehouse, farceur supreme, or, in plain English, an extraordinarily funny writer. Wodehouse wrote novels and stories that can be easily classified into several series: there are the Bertie and Jeeves novels and stories, the Blandings Castle novels and stories, the Mr. Mulliner stories, the Uncle Fred novels, etc. The characters from one series rarely appear in another. This novel is an exception. Uncle Fred appears at Blandings Castle, where he poses as Sir Roderick Glossop, normally seen in the Bertie and Jeeves novels (and one story); indeed, he encounters Sir Roderick while traveling to Blandings Castle. Uncle Fred, properly, Frederick Altamont Cornwallis Twistleton, fifth Earl of Ickenham, is a man who "together with a juvenile waistline, . . . still retained the bright enthusiasms and the fresh, unspoiled outlook of a slightly inebriated undergraduate" at the age of sixty or so. It is he who sets in motion the events that enable young lovers to marry and his nephew Pongo to settle his gambling debts. In general, his role is that normally played by Lord Emsworth's younger brother Galahad. Of course, any reader of Wodehouse novels knows at the start that things will turn out all right for any sundered hearts or frustrated lovers, as he knows that, any time the efficient Baxter appears, he will be discredited despite being thoroughly correct. The fun is in discovering just how it happens. And what fun it is. Wodehouse's mastery of the English language is unrivaled. He succeeds in producing prose that not only is enjoyable in its own right but also moves events ahead at a pace that is nigh exhausting. In the Bertie and Jeeves novels and stories, it is Bertie's narration that does this. In this novel, it is the dialogue as much as the narration that moves events ahead, establishes the characters, and gives the reader immense pleasure.

Published by Thriftbooks.com User , 20 years ago
This is my very favorite book, and I have been reading it about once a year for the past 15 years or so. I still laugh out loud at every reading. The very complex plot deals with Pongo Twistleton and his Uncle Fred, who visit Blandings Castle as imposters (Sir Roderick Glossip and his secretary, to be exact) in an effort to prevent the Duke of Dunstable from stealing the Empress of Blandings, Lord Emsworth's prize pig, and to keep him from smashing the drawing room furniture with the fireplace poker. Polly Pott (daughter of private investigator Mustard Pott) is also in attendance, pretending to be Sir Roderick's daughter. The story also involves the Duke's two nephews and their romantic problems: It seems Horace Davenport has hired a private investigator (none other than Mustard Pott) to tail his fiancee Valerie (Pongo's sister) and she has called off the engagement as a result, and Ricky's jealousy of his fiancee's attention to cousin Horace has landed him in the onion soup. Money won and lost at Persian Monarchs, the slipping of mickey's into people's drinks, and a Duke who throws eggs at people who whistle The Bonny Bonny Banks of Lock Lomand outside his window add to the hilarity. Of course, Mr. Wodehouse's unique turn-of-phrase doesn't disappoint in this delightful novel. I recommend this book to anyone who seeks diversion from reality. A must-read.

Published by Thriftbooks.com User , 20 years ago
A complete Wodehouse fanatic, I would have trouble giving less that five stars to anything I have read so far. Uncle Fred is a particularly good one to add to the guest room bookshelf----incredibly funny and nice light reading for a few days away from home.

There is only one Wodehouse!

Published by Thriftbooks.com User , 21 years ago
If you have ever read "Elements of Style" by Strunk and White (and if you haven't, then you should be legally prohibited from writing even so much as a thank-you note), then this book, like all Wodehouse books, is a perfect example of how to violate almost every rule in the book.Consider the following: "The ninth Earl of Emsworth was a man who in times of stress always tended to resemble the Aged Parent in an old-fashioned melodrama when informed that the villain intended to foreclose the mortgage. He wore now a disintegrated air, as if somebody had removed most of his interior organs. You see the same sort of thing in stuffed parrots when the sawdust has leaked out of them." How's that for failing to "omit needless words"? And how's that for vividly portraying the feeble-minded Lord Emsworth, one of Wodehouse's most memorable of his many memorable and hilarious characters?The plot here is typical Wodehouse: a few love-stricken young people see their dreams of eternal wedded bliss threatened by either misunderstandings or lack of cash or both, and a young ne'er-do-well has run up some gambling debts, a circumstance which puts him in danger of some painful bone-crushing. Enter Uncle Fred, an aging playboy with a manipulative mind and a sense of adventure. He orchestrates a plan involving a visit to Blandings Castle (the Emsworth estate) which results in everyone living happily ever after.But, of course, that plot outline is pretty much the plot outline of every Wodehouse novel. What makes it (and every Wodehouse production) a 5-star novel is the delicious phraseology, the preposterous and yet believable characterizations, and the continuous twinkle in the author's eye. You either "get" Wodehouse or you don't. If you don't, then go to a doctor and get it fixed immediately!

Published by Thriftbooks.com User , 21 years ago
P.G. Wodehouse has written this wonderful book about a pig, and love relationships (the author makes fun of the love relationships, nothing to worry about). In the beginning, it seems boring, but it speeds up after about 30 pages. Unlike other Blandings books where the hero is Galahad, in this story the protagonist is Uncle Fred. But it is the common Wodehouse theme where the Empress is kidnapped, and couples cannot get married because of the shortage of money. The funny things about his books are the way he plays with the character's personality. Beach-cold and calm. Empress-with a frown on her face tries to eat a bit of soap while locked in a bathroom. Mr. Wodehouse has a way with words when he describes the character's actions and he puts them in such a way that you laugh until tears pour down your cheeks. This is a really good book, and if you think it is boring in the beginning, stick with it for it becomes very funny. Enjoy!!!! Cheers!!!!! : )
Trustpilot
Copyright © 2022 Thriftbooks.com Terms of Use | Privacy Policy | Do Not Sell My Personal Information | Cookie Preferences | Accessibility Statement
ThriftBooks® and the ThriftBooks® logo are registered trademarks of Thrift Books Global, LLC