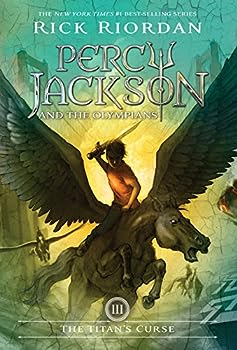 The Titan's Curse (Percy Jackson and the Olympians, Book 3)

From #1 New York Times best-selling author, Rick Riordan, comes the third adventure in the best-selling Percy Jackson and the Olympians series.When the goddess Artemis goes missing, she is believed to... This description may be from another edition of this product.

Published by August , 7 months ago
Was supposed to be in good condition. Was in poor condition. At least be honest about the condition of the books

My book is missing the first twelve pages…

Published by Missing a chapter :( , 11 months ago
I’ve read this book before and loved it, so I decided to buy it! I was extremely disappointed when I saw that the book begins on page thirteen. It was supposed to be in good condition; I don’t expect a good condition book to be missing most of the first chapter. I’m not sure how this happened but I was quite disappointed. Nothing against the book though. The Percy Jackson books are AWESOME!!

I love the Percy Jackson series

Published by The book came in Spanish , 1 year ago
This came in today but it’s in Spanish kind of a let down since I can’t read Spanish

Things are going in a serious direction!

Published by Khalessi , 1 year ago
This one started out a little bit slower and things definitely picked up on the serious note! There wasn't as much just fun. Things were getting serious. I really don't like Thalia too much as she doesn't seem to add anything too worthwhile. But I know Rick has a plan for her. Still love that Percy maintained his funny and same attitude. His comments always make me laugh.

Published by Thriftbooks.com User , 14 years ago
I thought that The Titan's Curse was a fantastic read because the plot was about a boy around my age who seems to always be getting into trouble, but not just any normal trouble. The boy's name is Percy Jackson and his father is the god named Poseidon. Yes, his father is the ruler of the ocean and the brother of Zeus. However, because his mother is a mortal Percy is a demigod, which means he's half god and half mortal. Oddly enough, Percy is getting into trouble with Greek and Roman mythological monsters from Homer's epic adventure, The Odyssey. Some of the monsters Percy runs into are a manticore, an ophiotaurus, and literally bits and pieces of the Titan Lord himself. This book is part of an unfinished series called Percy Jackson and the Olympians. There are a few reasons why I thought this book was such a great read. One reason I read this book with so much enthusiasm was because I was always on the edge of my seat. There was so much excitement that I had trouble setting the book down and doing my homework. Oddly enough, I would choose to read this book a hundred times over playing video games. Another reason I enjoyed the book was it had a steady pace. The book had a nice steady build up to the climax, and a nice steady decent from the climax. This made me feel like there was just the right amount of action and suspense throughout the book. A third reason I couldn't stop reading this book was I could relate Percy's life to my own. For example, Percy thinks he is more experienced than he really is. On page fourteen, Percy says, "The di Angelos were in danger. They might be long gone by the time I found my friends. I knew monsters. I could handle this myself." Sometimes, I think something similar when I become over confident after I do a good deed or make a funny joke. There are many great parts in this story, but the best part is during the battle in San Francisco between a group of three demigods, a goddess, a huntress, and a small portion of the ever growing army of the Titan Lord. This battle is the best part because most of the action and excitement is released in this short blossom of words. Even though the book is great overall, there could be some improvements. One improvement could be the dialogue. Sometimes I found the dialogue to be a little on the cheesy side. For example, Percy's demigod friend Annabeth calls him "seaweed brain" because he is a son of Poseidon. I understand that the author was trying to put humor into the book, but such an obvious nickname was more silly than humorous. However, even with the missed humor, many people would like this book. If the reader likes mythology, action scenes, and books in a series, they will absolutely love this book. If I could give this book a rating, one being the best and ten being the worst, I would pick one because I was so engulfed in the words and the story every time I picked up the book. Fortunately for all readers who like the series Percy Jackson and the Olympians, The Titan

A Titan of a Tale

Published by Thriftbooks.com User , 15 years ago
This book thoroughly lives up to the quality of adventure and plot seen in the first two. It still has the savvy wit, and yet the characters are still visibly growing. I'm excitedly looking forward to the next book, because I absolutely have to know what happens next. :)

If books were drugs, this would be morphine

Published by Thriftbooks.com User , 15 years ago
Ok maybe not the best title for this review but true enough, this book is addictive just like the rest of the series. Percy, Thalia, and Annabeth start off together in the beginning but things quickly change when they fall into a trap; leaving Percy and Thalia to save the world and Annabeth and as usual, must do so in less than a week or witness a potential doomsday. With the usual humor and allusions to Greek mythology, this book keeps you hooked from start to finish just like its 2 predecessors (The Lightning Thief and The Sea of Monsters). Before reading this book, it is best to read the first two as there is little character or plot introduction. Some lingering questions are solved from the first two books such as Thalia and Percy's ability to get along and Percy's fatal flaw is revealed. However, The Titan's Curse will leave you with many questions and hints at the future books (there is supposedly to be 5 books) and for sure it will leave you ready for the next book as the end introuduces a new adventure. All in all, Rick Riordan has done what many writers struggle with: he has actually written a great middle book. it maintains pace and action throughout the story, keeps the characters lively and original, and occasionally makes you laugh out loud which i something i didn't think i would ever do with dignity. anyone who wants to read a great story full of action, humor, and great characters just pick up this book.

Published by Thriftbooks.com User , 15 years ago
The The Sea of Monsters (Percy Jackson and the Olympians, Book 2) ended with a bang, with another child of the three gods emerging from the tree guarding Camp Half-Blood. Percy Jackson now has his hands full in THE TITAN'S CURSE, the third volume of the series. When he answers an urgent call from his best friend, Grover, at a school in Maine, unexplainable things start happening. Grover has found two more half-bloods, who are siblings, but the assistant principal is a powerful monster in disguise. Grover will never get the half-bloods to camp without help. Percy, Annabeth, and Thalia set off for Maine to help Grover, but don't realize that they're walking into a trap. Dr. Thorn, the assistant principal, has some tricks up his sleeve. When Artemis, Goddess of the Hunt, arrives, things get out of hand. Dr. Thorn falls off a cliff with Annabeth. Artemis goes after her and everyone else returns to Camp Half-Blood. Here, they try to act as normal as possible, but two camper's dreams indicate severe trouble with both Artemis and Annabeth. The Oracle speaks and five campers must find and bring back Artemis before the Winter Solstice. For the first time, Percy remains behind, but not by choice, and not for long. When Percy meets up with the group, the enemies start showing themselves--and the race to reach Artemis and Annabeth alive becomes more crucial. Can Percy save both them before the Winter Solstice? THE TITAN'S CURSE leaves the reader hanging, waiting for several important questions to be answered in the final two books of the series. This fast-paced novel, along with the action, makes it a great series for fantasy lovers, reluctant readers, and anyone looking for a good story. Reviewed by: Jennifer Rummel
Trustpilot
Copyright © 2022 Thriftbooks.com Terms of Use | Privacy Policy | Do Not Sell or Share My Personal Information | Accessibility Statement
ThriftBooks® and the ThriftBooks® logo are registered trademarks of Thrift Books Global, LLC