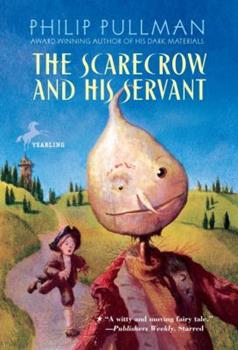 The Scarecrow and His Servant

A tattered scarecrow stands in the middle of a muddy field, taking no notice of the violent thunderstorm around him. But when a bolt of lightning strikes him, fizzing its way through his turnip head and down his broomstick, the Scarecrow blinks with surprise-and comes to life. So begins the story of the Scarecrow, a courteous but pea-brained fellow with grand ideas. He meets a boy, Jack, who becomes his faithful servant. Leaving behind his bird-scaring...

the scarecrow and his servant

Published by Thriftbooks.com User , 12 years ago
A delightful, laugh-out-loud read, for children and adults alike. From the wonderful Phillip Pullman . The scarecrow, lovingly constructed by the ailing farmer - and complete with turnip head - comes to life when struck by lightening. Then his travels start. He meets young Jack - all alone in the world - and says to him :" Here you are, an honest and willing youth and here am I, a Scarecrow of enterprise and talent. What would you say if I offered you the position of my personal servant ? " Jack accepts - and their adventures begin. A rollicking tale complete with military skirmishes, pirates, lost treasure. A wonderful cast of birds, led by Granny Raven. And the villianous Buffalonis, intent on destroying all that is beautiful in the Scarecrow's true home, Spring Valley. The story comes to its climactic finale in the courtroom where the Buffalonis plot to deprive the noble scarecrow of Spring Valley. The final chapter will leave you laughing with joy. And renewed appreciation of Phillip Pullman's exceptional talent. Read the book with an open mind. Do not compare this with the famous Dark Materials trilogy, as some readers inevitably will do. Enjoy it purely as a story. A multi-layered story. Children will enjoy this story on their level. The astute adult reader will gain something more : The courtroom scene with its costumed pomposity and legal terminology " non independentem judgi nogoodi " is a clever broadside at the theatre of the court. Pullman's use of the English language - and a lexicon of names as rich as J.K.Rowling's - will leave the reader wanting more from this author. I loved the Dark Materials trilogy and all its complexities. This is different - funny for the children and for the adult a clever, escapist and wholly enjoyable delight. And where oh where is some clever film maker to bring Pullman's stories to life ? And to bring children the richness of story telling that is so important to them ? The Golden Compass, with its pivotal plot change, fell far short of the mark. Thank goodness the Harry Potter films did not err in this direction, but remained true to what J.K.Rowling intended. And in so doing, opened the door on a complex and wonderful world. The same could be achieved with the Phillip Pullman stories - the work of a master storyteller .

Published by Thriftbooks.com User , 14 years ago
I purchased this book at LAX minutes before boarding my plane. My selection was based for the most part on the cover. A turnip head scarecrow was too hard to resist. I was immediately hooked and my fear of flying diminshed. (My fellow passenger was curious why a grown woman was reading a child's book.) I could see this as a movie - great characters and graphically interesting.

Published by Thriftbooks.com User , 14 years ago
I read this book to my 8-year old daughter. Every night, she couldn't wait til i come home from work, cuddle up under a blanket, and read it to her. She laughed, cried, and learned, and...we both fell in love with the way this scarecrow looked at life. 3 weeks later and she is still associating with, and laughing about, the positive way this creature interpreted life.

Published by Thriftbooks.com User , 15 years ago
To tell the truth, I'm not much of a fan of His Dark Materials Trilogy. I felt it was a little too dark, especially because it's considered children's material. But the name Philip Pullman still has been carved (possibly for eternity) in my memory, so when I saw this book in the New Arrivals, I had to pick it up. My first thought when I saw the cover was: aw, that's so cute. You see, it's not everyday I see a picture of a turnip with a face--a friendly one on top of it. And when I finished the book, my first thought was: aw, that's so cute. Yea. Seriously. If you're expecting something that resembles His Dark Materials, then you're looking at the wrong book. (You should have--hopefully--been able to figure it out just from looking at the cover, which is still cute. :]) This book is just a light and humorous read possibly appropriate for kids 8 and under (though if I were a parent I would object to the appearance of the word "damn" twice), but is enjoyable as well for all ages except for maybe the teens. Depending on your views, it can also pass as satirical and political, but that's just my opinion. This book is reminiscent of those children's books I used to read that were written long before I was born. A scarecrow is alive and animals talk and no one is surprised at either (at least not for long) and other strange things just keep happening, but eventually you learn to stop questioning and accept the magical realism. The scarecrow definitely reminds me of the scarecrow in The Wizard of Oz just because they're both scarecrows. Though the Oz scarecrow didn't crack me up as much as this scarecrow does. (An abundance of illustrations with this scarecrow's hilarious turnip face also helps, of course.) As a children's book, this one is fairly complex in its own right. Unlike those older children's books I mentioned earlier where things happen and twist around because the authors suddenly come up with an idea, the plot has been carefully planned since the beginning, which you can see if you finish the book and then reread the beginning. In addition, Pullman's writing style is less wordy than that of those old, then-alive authors. (I'm not deriding them; I'm perfectly aware that they did not have as many grammar or writing books back then.) To sum up: a great book, much recommended for everyone who needs a laugh.

what a missed opportunity for fun

Published by Thriftbooks.com User , 15 years ago
This book is hysterical, poignient, learned, and not being read by kids anywhere. The publisher should be ashamed for not marketing "Scarecrow" well : my local Borders had it in " teen science fiction"! My 10 year old and I had an uproarious time with this book - Pullman is a clever, sharp and taut writer . For those who enjoyed "The Pirates! In an Adventure With Scientists " (another poorly sold book), or maybe the funniest parts of "Hoot",this book is for you - and tell your friends ! Teachers of grades 4-7 need to get on the ball - it isn't just Harry Potter, Captain Underpants, or Kate DeCamilla (at least she 's popular) out there !
Copyright © 2020 Thriftbooks.com Terms of Use | Privacy Policy | Do Not Sell My Personal Information | Accessibility Statement
ThriftBooks® and the ThriftBooks® logo are registered trademarks of Thrift Books Global, LLC