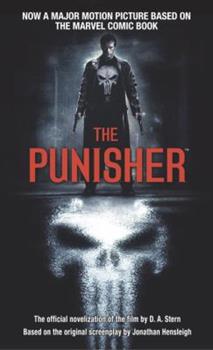 (Part of the Punisher Series)

MAKE THE PUNISHMENT FIT THE CRIME. FBI agent Frank Castle's final case ends with a literal bang, when a wannabe weapons smuggler is gunned down during a sting operation. But the dead man isn't just any punk. He's the son of Howard Saint, the powerful Florida tycoon whose hot-spot nightclub has made him famous, and whose multimillion-dollar money-laundering business has made him as rich--and as ruthless--as any of his gangster clients. Saint wants...

Just As Good As The Movie

Published by Thriftbooks.com User , 17 years ago
This Book Is very good it gives you alot more detailes about the characters and evrything.

Published by Thriftbooks.com User , 18 years ago
The Punisher, in stark contrast, to one reviewer, is not a one dimensional character. Because Frank Castle has lost everything, we want to know what happens to this person. It's what has kept us reading through Daredevil, Spider-man, Batman, Superman, and Hellboy. And Frank castle is more of a superhero than any of the before mentioned, because he wages a war on crime, not on supervillans but on crime itself. It's amazing that after 20+ years ,this phenomial character has survived the mafia, Tombstone, and the everlasting battle by censorship to put Frank castle in an early grave...

Published by Thriftbooks.com User , 18 years ago
I dont know why everyone gave it only 2 stars! Those people wouldnt know a good book if it sat on there stupid head!!!
Trustpilot
Copyright © 2022 Thriftbooks.com Terms of Use | Privacy Policy | Do Not Sell My Personal Information | Accessibility Statement
ThriftBooks® and the ThriftBooks® logo are registered trademarks of Thrift Books Global, LLC