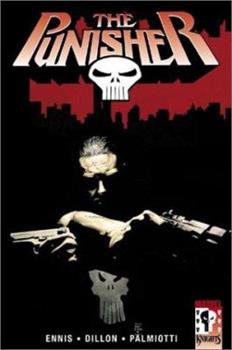 The Punisher Vol. 2: Army of One

This description may be from another edition of this product. Follows Frank Castle, the heavily armed vigilante known as the Punisher, as he travels from Brooklyn to Belfast encountering allies and enemies including Spider-Man and Wolverine.

Published by Thriftbooks.com User , 16 years ago
Another phenomonal TPB by the dynamic team of mad genious writer, Garth Ennis (Preacher, Hellblazer) and his partner in crime, artist Steve Dillon (Preacher). Army of One consists of three story arcs, The first is about the return of the Russian, guest starring the Amazing Spider-man, the second is about Frank Castle aka the Punisher's old army comrade, and the last 20 or so pages of the book is a story written and pencilled by artist Steve Dillon. First, the return of the insane Russian from the Maxi series, Welcome Back Frank. The Russian is back after getting his head cut off by the Punisher, being resurected by a couple of scientists backed by General Kreigkopf. With adamantium skeleton, titanium jaw, and many other artificial body parts, the Russian is more deadly than ever. Can Punisher stop him once and for all, with a little help from Spider-man. In this story arc, Garth Ennis seems to be trying too much in being funny, especially when the Russian came back with a pair of gigantic breats, but his usual humor does show up, just not as dark as it was in Preacher. Second, a story of Punisher's old army freind, Joe Perrett, who's failed bissiness and marriage deteriorates him and drive him to commit murders. And the last story is written and pencilled by Steve Dillon showcasing crime and its effects on people. This story does not have any dialogue or captions, driven only by Dillon's art, which shows his true talent to tell a story without words, with only picture. Very funny, packed with action, and smart, Army of One is very well written. As usual, Steve Dillon's stunning art was a perfect compliment Ennis's (and in this case, a little of his own) storyline. Jimmy Palmiotti also does a fine job with the inks. Steve Dillon is the all time best artist for Punisher. This is a very good follow-up to the 12 issue Maxi series Welcome Back Frank (also by Ennis, and Dillon), not as good as Welcome Back Frank, but still better than almost all comics out there in my opinion. It's well worth your money if you're an Ennis, Dillon, or Punisher fan.

Good comic but the Mature rated versian may turn some off

Published by Thriftbooks.com User , 17 years ago
Punisher is a good revenge hero And I mean it he is.My only probablem is how come the covers look waaaaaaaaaaaybetter than the acctual pages and pics and dialog.Why cant we get the guys who drew the covers draw the main pages with dialog! GOD! Than it would be awsome.Really awsome. The book is good no doulbt but it could have bin better.Now off to the MAX comic versian. For any true punisher fan you would also get this adult orientated versian but be fore WARNED1The max comic punisher is very heavy on the gore and violence and graphic language that wont bother most people.Example(punisher shoots a guy in the head and the guys head is graphicly detailaled with brains and ect and then parts of his brains and guey guts fall into an old mans mouth and ect)Bottom line. Its for Mature Readers.But give it a try if you like. I happen to like it alot.Its my most favortie max comic ever.They did a good job leaving the old PG+ and starting what the punisher was really about...Ultra violenceand hard core guns so make a quik stop at a comic book store and give this blood bath a try.You wont be dissapointed. I wasnt I really liked it. Later.

Awesome! Get a copy now!

Published by Thriftbooks.com User , 18 years ago
This and Garth Ennis' other Punisher works are excellent. Taught scripting, and fun adventure a-plenty. There are great laugh-out-load gags that lighten up an otherwise dark, sinister book, but don't detract from the characters or the gravity of the homicidal lunatic that is the Punisher. There are surprisingly moving parts too, that really show Ennis as a storyteller in touch with the human condition. You can also see where he's planting the seeds for the upcoming BORN story arc that details the origin of the Punisher in the jungles of Vietnam (his family's murder just set him off...)The Punisher may not be for everyone, and certainly isn't for kids, but is great entertainment for anyone who ever fantasized about dealing out justice when the law protects the wrongdoer.

Great series, but not quite as good as the first!

Published by Thriftbooks.com User , 18 years ago
Following in the steps of the previous series, the Punisher is no less violent or dark. But it lost a bit of its edge this time around.Don't be confused...the story is still great. A brief and rather funny, one-sided "team-up" between Spider-man and the Punisher against a familiar and unexpected enemy adds some great humor to the book. The Punisher finds himself later heading to a remote island where a traitorous para-military American force is planning a horrible terrorist act to deal out some indiscriminate justice.The Ennis/Dillon duo, along with Jimmy Palmiotti, manage to once again weave an engaging and action-packed story with its fair share of blood, violence, and wicked sense of humor. Its a great book because it takes itself seriously, but at the same time has just enough humor to get you to laugh to yourself. I would say this falls short of the standards set by the first one only because there are a few aspects about it that are a little silly, and some parts of the story just don't add up too well. Nevertheless, in the end, we have a good, solid story with great artwork and entertaining characters. Definitely worth the purchase.
Copyright © 2020 Thriftbooks.com Terms of Use | Privacy Policy | Do Not Sell My Personal Information | Accessibility Statement
ThriftBooks® and the ThriftBooks® logo are registered trademarks of Thrift Books Global, LLC