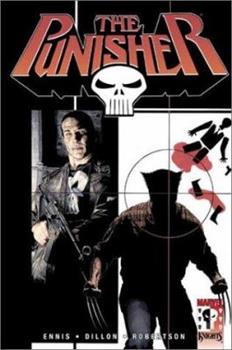 The Punisher Vol. 3: Business as Usual

This description may be from another edition of this product. Once, he was an ex-Marine trying to start a new life with his loving family. But when his wife and children were murdered by the mob, Frank Castle dedicated his existence to ending theirs. Now, the...

Wolverine gets what he deserves

Published by Thriftbooks.com User , 17 years ago
The issues collected here are much better than the ones found in the previous volume, Army of One, as we see former Preacher and Hellblazer scribe Garth Ennis get a little bit more comfortable as he throws us some of the bizarre and insanely dark humor that he is known for. There's much to admire, from a reporter handcuffing himself to Frank to get a story, to Frank taking a trip to Ireland; but the real highlight is the two issue arc in which the overly too popular X-Men member Wolverine gets his claw popping arse handed to him. Darick Robertson (who struck gold with Ennis on the Fury and Born mini-series) supplies the pencils on those two issues, and his art is just plain awesome. The only problem with Business as Usual is the constraints of the PG+ rating don't allow Ennis to get into the over the top bloodbath that he writes so meticulously, but other than that, this is one of the best Marvel Knights Punisher volumes available.

Punisher and Wolverine plus much more!

Published by Thriftbooks.com User , 17 years ago
Covering Marvel Knights Punisher issues #13-18, Punisher: Business as Usual is one of the strongest offerings from the series of Punisher novels. Ennis is at the height of his scripting power on this series. #13 and #14 chronicles Punisher on an unlikely mission of mercy to rescue a hostage in South America. For those of you that are rolling your eyes and groaning, this isn't a return to Punisher's War Journal days. This is a crazy Ennis thrill ride filled with twists, turns, and improbabilities. #15 is the tale of a reporter willing to do whatever it takes to get the story, even if that's making a deal with the devil, or handcuffing himself to the Punisher to see what Frank does on a typical night. With Detective Soap's life in the balance, the Punisher must decide what is good and what is evil...#16 and #17 are what this series if all about. The Mob, Wolverine, midgets, and a series of unfortunate events. I don't want to give too much away, but please, read these two issues at least a couple of times. The second time, pay attention to the facial expressions. Robertson does a brilliant job that has to be seen to be believed!In #18 Ennis spotlights his home territory of Ireland, sending the Punisher across the pond. Here we see what `pointless' violence really is. The bottom line is if you are a fan of Punisher, Wolverine, Ennis, or Robertson, then please take the time and money to get this book. You won't be sorry!

Wolverine got his (...)kicked by a non-mutant

Published by Thriftbooks.com User , 17 years ago
I never really got into the Punisher comics, and Wolverine was cool so I got this and laught threw the Graphic Novel. I mean first some stupid reporter wantes a story for the Punisher, hand coughs himself to the Punisher gets shot, runs some guy over, and falls in to a woodchipper,for a stupid story.Then the Punisher faces off with Wolverine. Wolverine get shot in the face,his antimanium skull hanging out, shot in the balls, and driven over with a steam roller.Thanks to the Punisher.You should diffently get this fr your collation

Wolverine finally gets what he deserves; Thanks, Frank!

Published by Thriftbooks.com User , 18 years ago
... The book is worth cover price just to see Frank park the steamroller on top of Wolverine, the most overrated, overexposed, unconvincing "tough-guy" in all comics. Not to mention the bonus of having "the old canuucklehead" shot in the face, and walk around for most of the story with his adamantium skull hanging out in the open. For X-haters, this tale is an instant classic. The irony of all this is that by the late eighties, I felt just as annoyed by the Punisher himself as I am today by Wolverine and his Clint Eastwood posturing.
Copyright © 2020 Thriftbooks.com Terms of Use | Privacy Policy | Do Not Sell My Personal Information | Accessibility Statement
ThriftBooks® and the ThriftBooks® logo are registered trademarks of Thrift Books Global, LLC