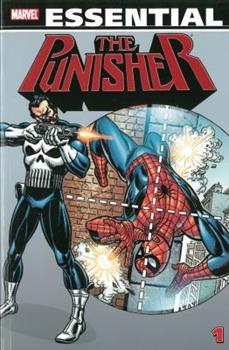 by Archie Goodwin and Gerry Conway

When the mob killed his family, Frank Castle went to war. But before he became the scourge of the underworld, the Punisher set his sights on a certain world-famous wall-crawler. This volume collects the vengeance-seeking vigilante's earliest appearances in the pages of the Amazing Spider-Man, Captain America, Daredevil and more.

Published by Thriftbooks.com User , 14 years ago
The Punisher is probably my second favorite character,Ghost Rider being the first. However, that is on levels of coolness only, when it comes to actual comics Punisher wins. This Essential collection has 25 comics inside, including a storyline by Frank Miller and a 5-issue miniseries by who-cares-it's-pretty-good. The paper is similar to that of newspaper(or the Daily Bugle:)and is black-and-white. Every story is well-written, and this is a pretty thick volume. The only thing I could ask for is more issues collected or a volume two. I don't care about the color, simply because the Punisher's world is pretty dark and gritty itself. Final Word:Great

Published by Thriftbooks.com User , 16 years ago
This is one of the best comics I own. The Punisher is my absolute fourth favorite comic book character of all time topped only by Wolverine, Spider-Man, and of course Tigra. This book shows his earliest comic appearences, from his debut in ASM # 129, his first fight with people like Jigsaw(my favorite Punisher villain)Kingpin (my second favorite Daredevil villain next to Bullseye)and even Doc Ock(my second favorite Spidey villain next to Green Goblin),to his own 5 issue limited series being made where he once again faces his arch-enemy Jigsaw. Throughout this whole book, Frank Castle AKA The Punisher saves lots of innocents, offs lots of evildoers, fights with many heroes(like Spider-Man, Daredevil, and Captain America)as well as the baddies he faces, and does just about everything to put him in the Marvel Heroes Hall Of Fame. Anyone who likes tough and misunderstood heroes and/or fighting and comics should get this book without a second thought. It is a timeless classic of a treasure.

Published by Thriftbooks.com User , 17 years ago
Alright, I had no idea who the Punisher was when I picked this up. I knew he was a bad ass that actually killed people and I was interested in the movie. I've always liked him, I even used to squeal with delight anytime he appeared on the Spider-Man or X-Men cartoon. But now I found a perfect way to get into the character.... Essential Punisher. You may or may not know that the Essential series are the first 25 issues of a Marvel comic on regular paper with no color. Essential Punisher is different, since Punisher didn't get his own series for a while, this book is composed of his first 25 appearances which includes: Amazing Spider-Man #129, 134, 135, 161, 162, 174, 175, 201, and 202. Amazing Spider-Man Annual #15 Giant Size Spider-Man #4 Marvel Preview #2 Marvel Super Action #1 Captain America #241 Daredevil #182, 183, and 184 Spectacular Spider-Man #81, 82, and 83 Punisher #1, 2, 3, 4, and 5 These comics are right past the Marvel Age in the 60s and start in 70s. They go all the way up to the 80s where Marvel started to go downhill so we got perfect timing here. Surprisingly, Punisher's character basically stays the same all throughout the book. From his first appearance where he's hired to kill Spidey to his own series at the end, he's pretty much the same. I especially recommend the first 5 issues of Punisher and the 3 issues of Daredevil, those are my personal favorites. Get this right, Punisher is not a hero, he is a vigilante. It was a very pivotal time in Marvel history, having Punisher kill people and busting up junkies and so on, but it's not as graphic as today. Punisher has mercy bullets and knock-out gas, but he only really uses them on innocents. It's also really cool to see how different Marvel heroes interact with the vigilante. Spider-Man stands him but doesn't always approve of his methods, Captain America completely despises him for killing, and Daredevil realizes his potential but doesn't like the whole killing thing. I really only have a few problems with this book. Marvel Preview #2 and Marvel Super Action #1 are a little hard to read do to the art style having to be shown in black and white. Another problem is that you are shown bits of different Spider-Man plots all mish-mashed together. Like you may read Amazing Spider-Man #135 and Harry Osbourne will discover Peter's secret identity and hate him, then the next time you Spider-Man in Amazing Spider-Man #161, they're best friends. Little plot hole like that can be a pain. My [physical] problem aside, this is a great book for Punisher newbies and vets and I look forward to Volume 2.

Published by Thriftbooks.com User , 17 years ago
Years ago, comics used good stories and just plain fun to keep readers interested. Foul language wasn't necessary, and the graphic depiction of a man's brains being splattered across the room was never considered. Those were the great days of comics, and the ones represented here. When the Punisher first came out, he wasn't all about killing everyone and everything that moved. Yes, he killed from time to time, but he also used "mercy bullets" that would put an enemy to sleep rather than kill him. Some of the greatest moments of developing the Punisher's character are in this book. Showdowns with Spider-Man (several, with one involving Nightcrawler too), Captain America, and Daredevil are in here. Also, we see the Punisher's first great arch-villian, The Hitman (sort of an evil for-hire version of the Punisher). No, there is no foul language nor huge splatters of blood (and with it being in black-and-white, you couldn't tell anyway), but you get some great stories. From his introduction, to his eventual madness (later explained as drug-induced), this is nothing but fun. The collection ends with the Punisher's first mini-series, and it's a great one. We get to see how other prisoners feel as they see the killer walking among them. Seldom do we get a treat like this one. Most "Essential" collections start with issue one of a character and go from there. Here we are treated to several guest shots in other mags, and it is a great picture. Yes, there are some weak stories (the one involving Cloak and Dagger could have used some touch up), but overall it's a good collection. Probably more enjoyable for the old-time comic fan rather than the ones raised on the uber-violence of today's stories, but good nonetheless. I look forward to the next volume. Highly recommended.

Black and white and read all over!

Published by Thriftbooks.com User , 17 years ago
Hey, how in the world am I reading BAD reviews for one of the best "Essential" volumes Marvel has put out. We are talking about "The Punisher," folks. One of the reasons that this collection is so good and so "essential" is because it would cost you upwards of $500.00 to put together all of these issues in their original format. Plus you have the advantage of reading all of the first Punisher appearances in chronological order, and you don't have to track down obscure volumes from five or six different series to do it. Sure, the other "Essential" volumes are great with their twenty or so issues of continuity from one series, but this volume is cool because it pulls it all together for you. I hope Marvel does a few more character oriented books in this series (like Bullseye for instance). And you can poo poo the art and the stories all you want, but the stories collected here are simply chock full of Bronze Age goodness. Some people have gotten a little too used to the Punisher being ripped from his Marvel Universe roots into a bizzaro "Preacher World" by a marginally talented creative team. If you like the current incarnation of the character running in comics, you may not like this book because it isn't full of exploding heads, hit men with breasts and all the other forms of shock jock stupidity that have devalued the character over the past few years. If, like me, you remember a time when the Punisher was a single-minded psychopath on a mission fit for a crusader (not to mention the baddest anti-hero on the block) rather than simply a sadistic jerk, you will probably enjoy this book as well. The black and white reproduction in this volume is much better than some of the other "Essential" books. There aren't any pages that look like the copier was running out of toner. Some of the material is a reprint of a reprint (copied from Marvel Tales rather than the original Amazing Spider-Man story), but it still looks good. The writing ranges from standard 70's goofiness to the genius of Frank Miller, but every story is enjoyable in it own right. The art is solid in most of the volume with only a few issues looking genuinely bad (but what do you expect from Peter Parker, Spectacular Spider-Man). On the other hand, the Miller and Janson material as well as the Zeck and Beatty stuff looks great, even in a colorless format. This book is so worth the money, not only because it puts The Punisher into an historical perspective in comics, but because it is a throwback to the days when comics were still a little bit fun. In order of appearance, this volume reprints: Amazing Spider-Man (ASM) #129 (1st appearance where he is duped by the Jackal into trying to kill Spider-Man); ASM #134 and 135 (vs. Tarantula); Giant Sized Spider-Man #4 (vs. Moses Magnum--later an X-Men villain); Marvel Preview #2 and Marvel Super Action #1 (both magazine sized soldier-of-fortune style anthology comics and some of the rarer material presented here); ASM #161 and 162 (1st a
Copyright © 2020 Thriftbooks.com Terms of Use | Privacy Policy | Do Not Sell My Personal Information | Accessibility Statement
ThriftBooks® and the ThriftBooks® logo are registered trademarks of Thrift Books Global, LLC