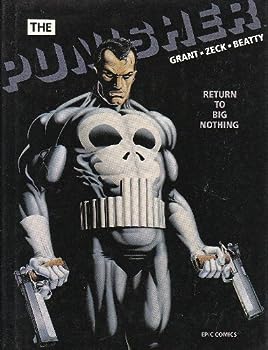 Punisher: Return to Big Nothing

(Part of the Punisher Series, Tuomari erikoisjulkaisu (#1993) Series, and The Punisher: One-Shots Series)

This description may be from another edition of this product. The Punisher goes after a smuggling ring run by the man who was his sergeant when they were in Vietnam, in a novel in comic-book format.

Published by Thriftbooks.com User , 16 years ago
Including Frank Miller's Punisher work in the Daredevil series, NO ONE pencils the Punisher better than Mike Zeck! It's only too bad that Zeck was fired from the Limited Series of Punisher books before he completed work on the final issue, since we missed out on another brilliant issue of top-notch Zeck work on the Punisher. However, this book at least gives us a little more Zeck art for us to admire. The story and, obviously, artwork are top notch. The coloring is wonderful, and, THANK GOD, pre-Photoshop. This gives the work more character. Highly recommended.

The Punisher's past catches up with him

Published by Thriftbooks.com User , 19 years ago
If you're looking for a "vintage" 80s Punisher tale full of all the things you've come to expect from him and the action genre of comics, you might want to give this graphic novel a gander. Included in this adventure are several signature Punisher situations: Frank mowin' down criminals, Frank mowin' down some more criminals, lotsa of angst & rage, Vietnam flashbacks, and the final one-on-one "fight" where our fave homicidal maniac goes by his own rules and does the unexpected to attain dark victory. Underrated penciler/ co-colorist Mike Zeck's art (with finishing touches by inker John Beatty and wonderful pre-PhotoShop-era coloration) is top-notch. `Late
Copyright © 2020 Thriftbooks.com Terms of Use | Privacy Policy | Do Not Sell My Personal Information | Accessibility Statement
ThriftBooks® and the ThriftBooks® logo are registered trademarks of Thrift Books Global, LLC