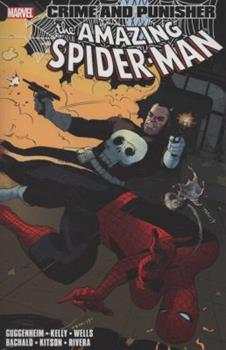 One of Spidey's oldest - and most deadly - villains has been revived by his newest nemesis, the nihilistic Mister Negative. Ol' Hammy has his lethal head all polished up; now, he's aimed at a city and ready to butt into its business.

This series just keeps getting better!

Published by Thriftbooks.com User , 12 years ago
Wasnt feeling Spidey to much during the whole Brand New Day thing but I am definitly a fan of the series now. Gets back to the roots of Spiderman!!

The Punisher Stops By...For a Few Issues, At Least

Published by Thriftbooks.com User , 12 years ago
Although this collection is titled "Crime and Punisher," only two of the collected issues actually feature the Punisher. While this may disappoint some fans, the Punisher issues are good enough to justify purchasing the entire book. Zeb Wells's take on the Punisher/Spider-Man relationship strikes the right humorous notes while still portraying the Punisher as the psychotic anti-hero that he is. This book also includes "Amazing Spider-Man" #574, in which Flash Thompson, Peter Parker's boyhood friend, is wounded in the Iraq War. It was authored with the assistance of an injured veteran, and compares and contrasts Spider-Man's heroics with Thompson's war heroics. The Hammerhead issues that round out "Crime and Punisher" are decent, but the script--by Joe Kelly--and artwork--by Chris Bachalo--are too busy for their own good.
Copyright © 2020 Thriftbooks.com Terms of Use | Privacy Policy | Do Not Sell My Personal Information | Accessibility Statement
ThriftBooks® and the ThriftBooks® logo are registered trademarks of Thrift Books Global, LLC